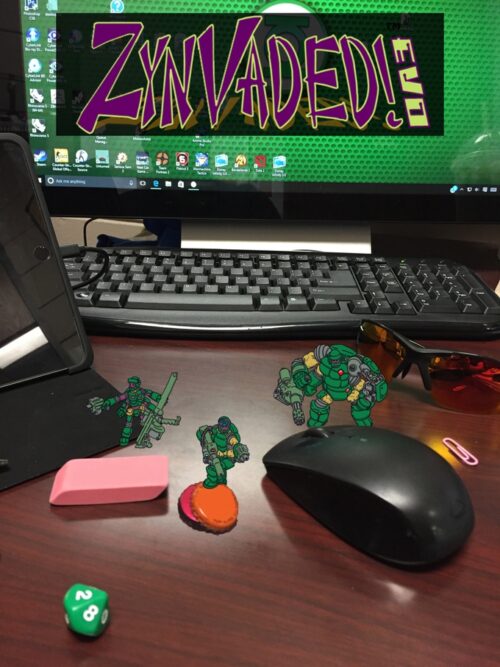 This review is LONG overdue. Back in the fall, The Rat Hole featured ZynVaded! EVO as the first game in our Slinging Paint miniature painting video series. A combination of factors kept interrupting the review you’re reading now. However, the upside to those delays (for me) is that I was able to play this a few more times.

The best way I’ve found to describe is game quickly is this: remember the movie Small Soldiers? If not, here’s the trailer. But if you do, it’s like that but smaller still. Here’s the slightly longer pitch: aliens shoot a probe at the earth, it lands on a game table, and they think that’s the scale of the whole planet. So when they invade, they think they are bigger than humans, when in fact they are only a bit bigger than the average gaming miniature.

The result is a 1:1 scale skirmish game that is surprisingly rules light, but still heavy on fun. The entire rulebook (or Rulez book, as the case may be) is only 30 pages, with each page only being a 1/4 standard paper page in size. The rules themselves only take a little over half of that page count. The only dice that are used is a single d10 for each player. Beyond that, each player needs a measuring tape, a pencil, and a stats page for each model you use (usually only 3 of them). You can always download more stats sheets from their website, but everything you need comes with the starter set.

Speaking of the starter set, it comes in a Chinese take out box. That may be one of the games coolest, and most delicate, random selling points. It is unique enough that even if you aren’t playing (yet) people stop to look. But it’s also just a bit flimsy, and an odd size, for packing around too much. At some point, I have no doubt that I’ll swap it into a more traditional model box eventually. There is a scenario that uses the box, but I don’t see any reason a replacement box wouldn’t work just as well.

The models normally come unpainted and unassembled. I hate assembly, so they were kind enough to arrange that for me. Now that Slinging Paint is running smoothly (remember, it wasn’t even an idea when I got this game), I hope we can arrange more models, and Jaymz has specifically asked to assemble them himself. The Starter Set consists of two teams of three models. Both the Kyll’al and Sav’m factions have a single Sergeant (Leader), Heavy Gunner (Support), and Sniper (Scout) figure. All six models are different, with each type being similar in appearance and identical in stats between the two factions. Once you get used to the rulez, there is a third faction, the Terra, that has different stats, and numerous unaligned Mercz that can be used to fulfill the different team slots or be a fourth team member. While not currently available, players can also download the stats sheets for the Version 1.0 models, giving even more customization options.

I mentioned earlier that this is a 1:1 scale game. What that means is that the models are life-sized. What makes that extra cool is that when you play on a cluttered desk, for example, the stuff on your desk IS the terrain. That stapler on your desk is terrain and represents a stapler on a desk. Over the holidays, I played a game under a Christmas tree. A few weeks ago we played amidst a cluttered pile of other games. Unless one of the missionz calls for something specific, you can play anywhere with anything. I really want to play a game ZynVaded in the middle of someone else’s game of anything else.

[NOTE: playing on a random co-workers desk, without their previous knowledge and/or permission, is generally discouraged. -dc]

I don’t play a lot of miniature wargames. If you just look around the site, you’ll see why. I just don’t have time. I don’t have the time, but I also don’t have the patience for assembling and painting minis. That being said, if I have a friend that wants to do those things for me, I love playing a good skirmish sized game like ZynVaded! EVO. This game, specifically, just has so many options for how to play that it’s always fun. If you’ve never done something like this, talk to your Friendly Local Gaming Store. They may have nights where they teach new people, or at least be able to point you to someone who can do it for you.

You can find more about ZynVaded EVO online at zynvaded.com or on their Facebook page at facebook.com/ZynVaded-144047275608078