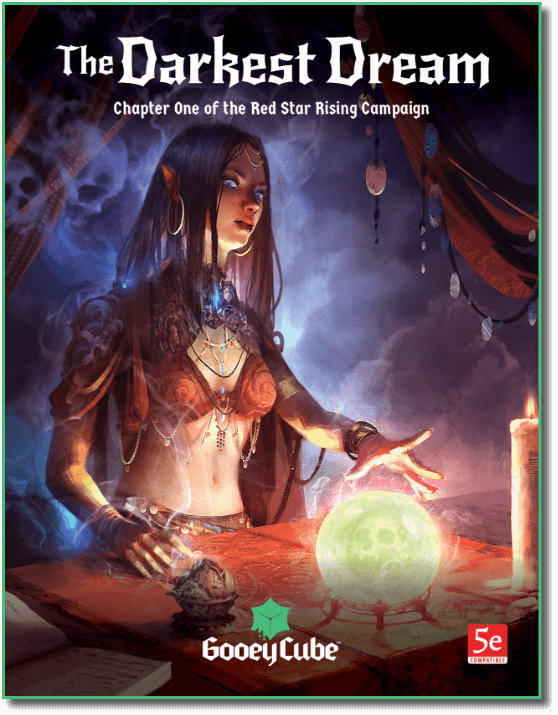 When I was handed a copy of The Darkest Dream boxed adventure set by my editor, I was excited to dig into it. I have fond memories of box sets from back in the 2e era. My well-worn copy of the first Forgotten Realms box is still something I enjoy going back to, reading through the books and staring at the colourful maps and handouts. I am a sucker for a good looking box set, and all the treasures they hold. Unfortunately, while The Darkest Dream is a very good looking box set, what it holds is more trinket than treasure.

Let’s start with what you’ll find inside. The Darkest Dream by Gooey Cube is the first set in the Red Star Rising Campaign. As the box proclaims, there are over 150 pages of content and 120 handouts contained within. This breaks down into:

It’s a lot, and the box is not recommended for anyone who skipped arm day at the gym. And flipping through it all, a lot of work has gone into creating some beautiful art for this game. Every handout, for instance, is a beautiful 8.5”x11” colour drawing depicting something from the adventure. The character portraits are all full-colour, head and shoulders illustrations, with a bit of a blurb about the NPC on the back. The adventure book, GM Reference Book (both coil bound, which I love to see), heck, even the pre-generated character sheets are all full colour affairs. If you pick this up for your table, there is no question your players will be treated to a visual spectacle.

Therein lies the first of my issues with the product. So much care and effort has gone into providing an excellent player experience, the creators seem to have forgotten that the target audience for any adventure, regardless of its scope, is the Game Master. Whatever else you do with it, an adventure is a tool for the Game Master. An adventure that doesn’t take every opportunity to make that tool easy to use inevitably creates more work for the GM, and we’re a pretty busy bunch already.

What do I mean when I say “make the GM’s job easier”? For instance, the creators very wisely split monster and NPC stat blocks off into the GM Reference Book, with page references in the adventure itself. This is great! As a GM I don’t have to flip past stat blocks to get to story text, or flip pages mid-combat to find what I need. But they didn’t do this for any other aspect of the material. NPCs are also expanded upon in the GM Reference Book, but are introduced in the adventure without the benefit of a page reference. Rumours and stories, a huge part of this setting and again, something the creators emphasize elsewhere, are likewise not cross-referenced when they come up in the adventure text.

Let’s talk about the adventure text for a moment. This is another area in which the creators have missed a chance to make the GM’s life easier. The entire book is formatted as two-column blocks of text, interspersed with hand-out artwork where it is pertinent to the encounter (and to their credit, they do include references to the handouts for ease of use). Read aloud text is differentiated by bolding those sections to be read. Well and good, but there is then little to no attempt in the encounter descriptions to highlight important points for the GM or make them easy to find while running the encounter. While I am not the biggest fan of boxed text and I respect their attempt to do away with it, I think this is one of those occasions where boxing the read aloud text would have then allowed them to use text formatting to emphasize important points in the encounter descriptions. Even without boxing everything up, the creators could have helped the busy GM a bunch by adding point form summaries at the top of the encounter text; checks and DCs, rumours and NPCs in this encounter (and their page references), key things the PCs should hopefully find out or solve. Things the GM should be able to find at a glance.

I should also note that everything mentioned above also makes this adventure difficult to access for folx with a visual impairment, or ADHD, or dyslexia. Add a larger and more dyslexia-friendly font to the points above, and you would also make the documents easier to use for those GMs, with the knock-on effect of making the whole thing easier to use for everyone.

And yes, of course I can go through the document ahead of time with highlighters and page tabs and sticky notes, adding in all the cross referencing and emphasis I want. The thing is, when I have to do that with a three dollar adventure I downloaded from DriveThruRPG, that’s fine. But I shouldn’t have to do that for a product approximately ten to twenty times more expensive (depending on whether you get the print or PDF version). As a GM, when I buy an adventure at that price point or higher, I think I have a right to expect that the product is going to be as easy to bring to the table as possible. Sadly that is not the case here.

As for the adventure itself, I won’t spoil any details. It’s a solid enough adventure with a decent story. Definitely not a railroad, more of a well defined series of walking trails, which I think is good thing for an adventure for first level adventurers (and therefore possibly new players). While the creators have done an excellent job of filling in just enough setting information to make the adventure immersive without overwhelming the players with lore, though, the choice of lore is problematic. The characters are expected to begin as members of a cultural group called the Hanataz, an analog for the Romani people, and many of the standard ignorant clichés make an appearance. While the publishers have said they researched Romani in the writing of this, that in itself is an issue. Why not hire a Romani writer or editor and benefit from their actual experience? If nothing else, a Romani writer/editor would have kept the G-word from being slung around. It’s also unfortunate because focusing on the Hanataz centers the characters in a narrative around discrimination and bigotry, a particularly ill-advised path given everything happening in the world.  [Editor’s Note: When TheRatHole.ca received this copy, I was advised that some limited first-print copies still exist with that verbiage but that it was removed for the first full run. I personally did a quick check, but missed it and did not advise Brent of that potential content. That’s on me. -dc]

So, should you buy this? I’ll start with this bucket full of caveats *plunks bucket on table*. If you are looking to start a new, immersive campaign with your group; if you have the time, pre-Session Zero, to go through the text and set up your own cross-referencing; if you also have the time to make the Hanataz something other than re-labeled Vistani and strip out the bigotry narrative…then yes, I would say that picking up the PDF version of this might be worthwhile. Because of all the player-facing material in this set you are going to wow your players for sure. And while it may not have been the initial intention (this was produced in 2019, pre-pandemic) all those player aides lend themselves really well to running this game for a virtual table; you can pop an NPC portrait up on the screen while you read their text, share player handouts with everyone at once, and so on.

But as much as I love big, beautiful box sets, I don’t know that I would buy the print version for myself. And that breaks my heart because The Darkest Dream is definitely big and beautiful. But I would have to put so much of my own work into it to make it useful for me at the table, I couldn’t justify the cost of the print version over the PDF.

You can find Gooey Cube online at gooeycube.com or on Facebook at facebook.com/gooeycube.