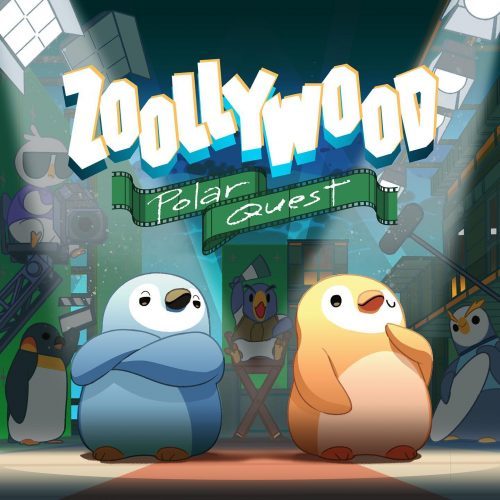 Let me preface this review with the following: I love penguins. Absolutely love them.

About a year ago I saw that Bluepiper Studio, the creators of Glyph Chess, was coming out with a penguin themed board game. I honestly don’t know if I’ve clicked a link faster in my life. I kickstarted them and made absolutely sure that I ordered the version with the adorable 3D penguin figurines.

The box arrived on my doorstep earlier this week, and those captivatingly cute penguin figurines? They did not disappoint.

Zoollywood is designed for 2 players (with a 4-player team mode), and while having an incredibly endearing theme and pieces, it is actually quite a cagey little head-to-head game! You and your opponent are fighting to occupy the game board with your eggs and penguins in order to secure your star penguin a role in the next big Zoollywood film.

The mechanics of the game were straightforward to learn. You have three actions you can take and may only do one per turn: lay an egg, hatch an egg, or explore with one of your penguins. Your penguins move in a straight line along the hexes, and pop back up on the other side if you fall off the edge! As a penguin explores, it blasts through your opponent’s eggs and leaves a trail of its own eggs behind. It must stop when it runs into its own egg or reaches an obstacle, which is where things start to get very interesting.

There are various “scenes,” each with different obstacles and cards. The obstacles trigger different effects, and greatly influence the strategy of the games. Some obstacles, such as the icebergs, have a very small effect on the pace and intensity of the game you play, and others, such as the storms, can lead to a feverish battle with eggs being added and knocked off at a speed that will leave you breathless! The tide can turn very quickly with some of the later obstacles, making for a very thrilling and engaging game.

I absolutely loved the obstacles, they make every playthrough unique and mean that I’ll be pulling this game off of my shelf a lot more often than some of the less flexible games that I own. The obstacles also make the game very scaffolded and versatile, with some obstacles being more suited to younger or new players, and later obstacles being more suited to a very competitive style of game. It is playable for younger children (10+, the eggs are definitely choking hazards), and would be a very fun way to introduce children to abstract strategy games, while still having an appealing, child-friendly theme. Also, I imagine that playing against different people would also give you a wildly different experience of the same obstacles, as different people would likely see different ways to use each obstacle, but I’ll have to wait until after covid is over to test that theory!

But what I liked the most about Zoollywood is that it relies very little on the mechanic of luck. It really does come down to strategy and thinking ahead, and feels a little chess-like in that sense. Similarly, the speed with which the lead can swing reminded me of Othello or Reversi. Both chess and Reversi are heavily strategic games, and Zoollywood does an excellent job of providing a lighter, faster, and infinitely cuter strategic gameplay experience.

In conclusion, Zoollywood is a great 2-player/4-player strategy game that is quick to learn but difficult to master. The gameplay is varied and lends itself well to being played over and over again. It has a great theme (biased, me?!) that will appeal to younger and older audiences alike, and I’m very much looking forward to taking it along to board game nights once those are a thing again. 🙂

Megan Crowe is a lover of board games, a teacher of small humans, and a Christmas fiend. She enjoys curling up with her cat, husband, a book and a tea, but equally enjoys crushing opponents on the quidditch pitch.