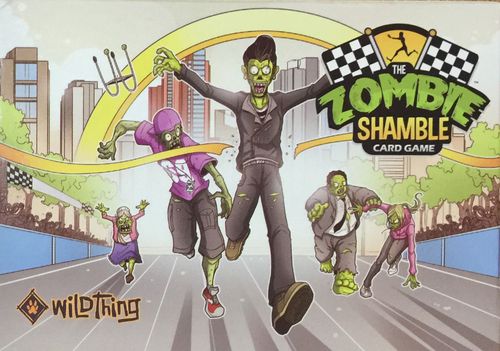 Halloween comes in two flavours. Super gory/scary and kinda goofy. The same goes for the monsters that embody that wonderful season. (Halloween is a season, not a day. Fight me.) Vampires can be blood-soaked villains or just a kid in a Fifth Grade with a weird thermos [Bonus points for anyone who can correctly comment what I’m referencing there -dc] Personally, I’m a not a huge fan of gore, but I LOVE the goofy flavoured monsters and that includes zombies. So Zombie Shambe is a game that is potentially right up my alley.

The zombie apocalypse has come and gone, and the zombies won. What exactly do zombies do when they aren’t hunting down living brains? Zombies get bored too, you know. So why not have a foot race? Humans might run kilometers long marathons, but most zombies aren’t particularly well known for speed and stamina, so a zombie race only needs to last 25 excruciatingly long steps. That’s where Zombie Shamble picks up.

Everyone in this game is a zombie. On a players turn they draw a card, then play a card. That’s it. It’s so simple even the most rotten zombie brain can get it. The single card you play may consist of a Step Card (that moves you towards the finish), a Calamity Card (bad things, obviously), a Fortune Card (negates a Calamity Card), or a Trump Card (making you immune to a specific Calamity Card in the future). If you don’t have a Step Card to play, you can use any card to take a single step forward. Similarly, you can discard a Step Card to draw additional cards into your hand and then discard down to your hand size. The game ends when someone reaches exactly 25 steps, no more, no less. (Because zombies are a bit OCD about some things.)

The art and flavour text for this game is great. It’s quirky and simple, just as it should be. There’s a lot of positive in this game, but there’s also not a lot to the game in general. I wanted this to be one of earlier reviews, but when I first played it just didn’t connect and wanted to give it a few more tries. Playing with two people definitely lacked something, three to four was definitely a better experience, although I do find that I miss the fifth friend we had to eat, as per the rules.

The game goes quickly, and for the right group would make a fun little palet-cleanser between other games. It’s not a game I’m going to invite people over specifically to play, but it’s certainly something that will remain on the table when people come over for other things.