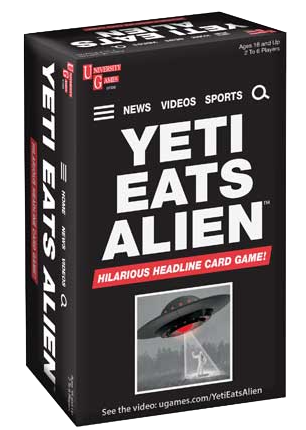 Well, that escalated quickly (but in a good way). In April, my first game review for Man Bites Dog was posted here at The Rat Hole. The same day, a representative from University Games commented, saying that a new “adult party version” of the game would be coming soon. At the beginning of August, The Rat Hole’s Head Rat, Dave Chapman, was on his epic road trip to Indianapolis for Gen Con; by the time I was volunteering at the 25th Anniversary Animethon in mid August, he was there to hand over a copy of Yeti Eats Alien for me to check out.

Let’s start out with the basics. The rules are exactly the same as Man Bites Dog: you still have five cards, you can still trade in up to three of them, and the goal is still to reach 500 points by making headlines. The Exclusive Card (which is now a UFO) still doubles your score for one headline. The range of points on the cards is relatively the same, although thankfully, there is no zero point card. This time, there seems to be a better balance of verbs, nouns, and adjectives, including around twenty words that could be used in multiple ways if you are creative.

Now for the differences. The appearance of the cards is quite different from Man Bites Dog. The cards are black instead of white, and the top of the card is designed to look more like a webpage than a newspaper. There is an obvious effort to make the game both more modern and more adult. And by “more adult” I mean sexier. The name of the game may be “Yeti Eats Alien”, but you are more likely to get things like “Stripper extorts CEO”. The biggest challenge in trying to make something up to the minute modern is that you risk sounding awkward and dated in a very short time. In this case, the “modern” words include hipster, NSFW, dotcom, and emoji. While it is true that emojis themselves have almost taken over the 21st century, it is surprisingly difficult to fit the word “emoji” into a five word or less sentence. On the other hand, seeing the word “hipster” just made me laugh. Although it is still cool to call something “not safe for work”, I’m pretty sure that the use of the word “dotcom” died around the same time that the “dotcom bubble” burst. (The only thing we could think of to do was word + dotcom to represent a website.)

Compatibility with the original game is surprisingly good. The only problem we encountered was when I got the same word twice, with two different point values. Having the combined deck also allowed us to test out the “poker variant”, with two cards on the table for everyone to use in addition to each player’s five card hand. The game goes faster this way because you can potentially have up to a seven-word headline.

This is definitely a step in the right direction. I can only think of one thing that could make it even better. Now that there are more cards to work with, I would like to see instructions for the “poker variant” (originally described in Man Bites Dog Deluxe) included in every game.