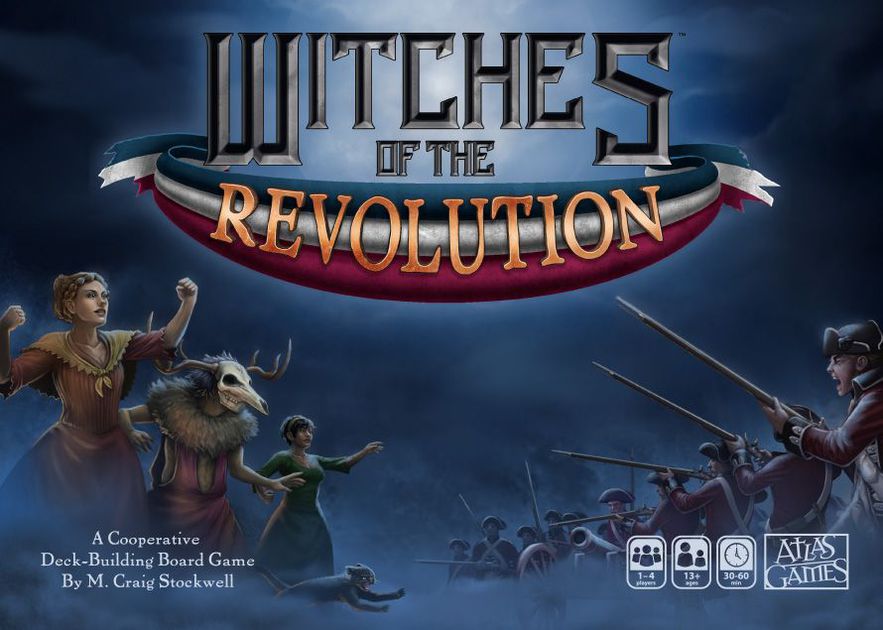 Witches of the Revolution is a cooperative deck-building game, from Atlas Games, that drops 1-4 players into the intrigue and secret mysticism of the American Revolution.

As with most deck building games, each player starts the game with the same individual starting deck of cards. These 15 cards are your Seekers, low-level witches that can be used to overcome events and recruit more powerful witches into your coven. Each Seeker has a combination of two of the six possible magic icons. These icons are used to overcome the different events that come into play. Seekers also are used in recruiting more powerful witches like Dedicants, Celebrants, and Stewards, who have more magical icons that can make overcoming events easier, and can be used to further recruit more witches. But if you don’t recruit them fast enough you may lose the chance forever.

At the start of every player’s turn, a new recruit comes into play and may push another recruit permanently into the discard pile if they haven’t been recruited soon enough. Similarly, on each turn a new event comes into play, pushing any existing events farther down the event track. But events don’t simply fall off the board the way recruits do. As more events come into play, they become harder and harder to overcome. Sometimes temporarily, boosted by other events that are also in play. Sometimes permanently as a tracker that shows the power of the Moon moves ahead and adds an extra cost to overcoming events.

The game ends in victory if the players can overcome enough events to complete the four semi-random objectives in play. For each event that is overcome, a token is removed from one of the objectives matching either type of magic icon that could have been used for that event.

In most player-versus-player style games the challenge comes, mostly, from whoever you are playing with and against. A group of newer players may find enough challenge amongst themselves, while a more experienced player may eat all of them alive. This is a cooperative game, which means the players work together and the challenge comes entirely from the game itself. That often means that cooperative games are simply harder to win because they have to be. No one really wants a game they ALWAYS win, they want to feel they earned a victory. Some games, like Arkham Horror or Pandemic, have a reputation for being incredibly difficult and can come down to a single turn in which the game could be won or lost. That happens even when you play by the “easy” rules. Witches of the Revolution is brilliant, in that is very easy to scale the difficulty level up or down. The box comes with 80 event cards, 40 easy, 40 hard, each marked with one of eight glyphs. Want an easy game to start off? (answer: yes, you probably do.) Just play with the easy cards. Want a super-hard challenge, just use the hard ones. You can swap out as many easy or hard cards marked with the same glyph to adjust the difficulty and still maintain a balance of what type of events you need to overcome to win. You can even randomly select five easy/hard cards of each type and not really know what sort of challenge you’ll be walking into.

The art in this game is exceptional. All the cards fronts have a revolution era parchment look, which carries through into the simple line art and shading of the images on them. The exception is the objective cards. They still have the same parchment style, but the additional artwork is much more detailed while still feeling like they belong.

[Fun story: Game designer M. Craig Stockwell was so amazed by the artwork for one of the objectives that he got it as a tattoo on his arm. -dc]

As with most cooperative games, you can play this as a group, or alone. Playing this in solo mode works almost identically to playing as a group, with the only difference being an extra card in your hand size. For me the cyclical nature of the gameplay (Flip a card, flip a card, recruit/act. Flip a card, flip a card, recruit/act) made the individual play feel a little too repetitive for my taste. It almost became a muscle memory thing and it was several turns before I realized that I was increasing the difficulty on the Moon Track, but not actually taking the penalties. Oops. That being said, it’s a great way to learn the game before breaking it out with a group, and that’s a fairly significant benefit that many non-cooperative games don’t have.

The only thing I didn’t like about this game is an admitted pet peeve of mine, the box insert. When I opened everything up, I was super impressed. All the tokens had their own spots, you could separate all the event cards by glyph and hardness, spots for the rest of the cards, with a little room for expansion. It was great until I opened the box to play the second time. The spots for the tokens were too shallow to actually hold anything in place, and the regular sized cards had similar containment issues. The smaller Event cards were fine, as they got stored on their edge not flat. The other frustration was that one of the finger holes to get the cards out ended ABOVE the last few cards, and I almost damaged some cards trying to get them out without dumping the whole box. I tossed in a bit of cardboard under those cards and bagged the tokens (which still fits in the box just fine), and the problems were solved. But it was still disappointing, given how great the idea was.

Overall, Witches of the Revolution is a great game that just oozes thematic flavour with every card flip. The mechanics are solid, and the scalable difficulty is handled in one of the most effective and player-friendly ways I have seen in for a co-op game in some time. This was a game I had been looking forward to for some time before its release, and it didn’t disappoint.

You can find more Atlas Games online at atlas-games.com or on their facebook page, facebook.com/AtlasGames