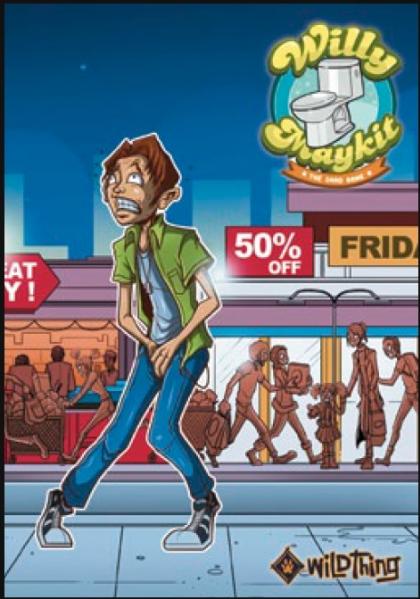 But had things gone right in the fall, or had I been paying better attention this review would have gone up as our second official post. Why, you ask? Because we launched on American Thanksgiving (or as we call it in Canada, Thursday) and Willy Maykit literally takes place on Black Friday.

The premise is that Willy is just average joe, who just drank an extra-extra-large cup of joe (or Trenta if you’re extra fancy), but is stuck at the mall with his friend, Betty Woent, for the capitalist insanity of Black Friday. That giant coffee-like drink has gone through him and if he doesn’t find a restroom quickly, things will become uncomfortable. Everyone is playing an alternate Willy, who all have the same problem. Willy is ok with karmically throwing another him under the bus if it means he can he can get relief sooner. It’s very existential.

Name puns aside, this game is a bit of a hard sell. “Hey guys, let’s play again about needing to pee. No, really…” But once we got playing it got really cutthroat, really fast.

Every Willy starts play with a Call of Nature card (most for easier tracking) and 20 Control markers (whatever you want to use). You can never have less than one marker on your Call of Nature cards, but as the game goes on the exact number will go up and down. At the start of a player’s turn, they must Answer the Call of Nature by losing a number of Control markers equal to the number of markers on their Call of Nature card. If you reach zero Control, you lose control and have an embarrassing accident and lose. Assuming they are still dry and in the game, that player can then play one Mishap card (bad for other Willys) and one Small Favour (good for your Willy)

Once you just accept (or steadfastly ignore) the premise of this, it’s a great resource management game. There were a few moments of “wow, they just said that” but there’s nothing explicitly rude, and all the cards are presented in a wonderfully goofy way.

It’s not an all-night sort of game, but it makes for a great time as a warm-up, or in between other games. I really enjoyed it, and will probably pull it out again down the road. It’s a short review for a short game. But ultimately, the important part is me saying it’s a game worth picking up.