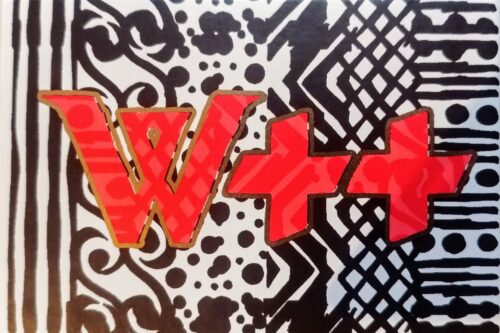 I like word games; I have a long history with Scrabble and its variations. But sometimes you just want something portable, and phone games just don’t cut it. Sometimes you want more. I also like card games: they are portable, self-contained, with so many possibilities. So, I was happy to learn that there are alphabet card games being designed. Not just games; a game system. Wibbell++, by Stuff by Bez, is a card game that can be many games. In fact, the label on the box says W++, a cheeky nod to the old C++ programming language. Although there is a new edition being made, under the name The ELL Deck.

Anyway, W++ is a deck of cards, but instead of suits and numbers, it has letters (2 per card), patterns and numbers. Depending on what game you are playing, you may need to pay attention to all three, or just two, or just the letters themselves. The game comes with rules for six games: Wibbell, Grabell, Phrasell, Coupell, Faybell and Alphabetickell. There are also more games available online as PDF files. In the “guide to the deck as a whole”, there is advice on how to design your own game. It’s tempting, but I haven’t gone that far yet.

The two-player cooperative game, Coupell, is surprisingly challenging. In this game, the goal is to create words of 4 letters or more, with longer words being worth more points. The challenge is, even though you can only claim words in your own hand of cards, those cards can only be modified by your partner. And all the letters of a word must be in order to be claimed. Each player starts with three cards in front of them, in the order they were drawn. At the beginning of your turn, you draw 3 more cards, which are also added in order. During your turn, you can perform 2 actions, either moving one card in your partner’s hand, adding a card to your partner’s hand, or claiming a word from your own hand. When a word is claimed, 3 cards are discarded, and the remaining cards are added to your points pile. Thus, longer words are worth more points. At the end of your turn, you must count the cards in your hand. If there are more than 8 cards, the game ends immediately. Remember that cards are counted at the end of the turn, not the beginning. To make things even more interesting, the goal of the game is to have both players to have as close as possible to the same number of points.

This game was surprisingly difficult. Both times that I played it, we were only able to collect one word for one player before the game ended. I think we were too ambitious and tried for longer words too soon. But it is something completely different for people who are used to competitive games.

The namesake game, Wibbell, has a bit more of a faster pace, but the further you get in the game, the more challenging it gets. The game starts with 2 cards placed face up in the center of the table, meaning there is a total of 4 letters to work with. The goal is to call out a word that contains at least one letter from each card. The word can have as many extra letters as you want, but it must contain at least one letter from every card. There are no turns, whoever sees the first word gets the points. When you declare a valid word (no proper names, everything else is fair game) you take one of the two cards from the center and put it in front of you, and replace the card you took. Play continues, except now players must include letters from the central cards and the cards in front of them. When someone takes a third card, this ends one round. They take both cards from the center and now must choose one of all 4 cards to be a permanent card in front of them.

All cards are discarded, except the handicap card, and two more central cards are drawn. The game continues until the entire deck has been played out. This is the kind of game where winning every round is actually a disadvantage. Near the end of the first game I played, I had 3 permanent cards in front of me, as well as the 2 center cards that I needed to make words from.

Surprisingly enough, the game we had the most fun with was the one that didn’t actually involve making words. In Alphabetickell, the goal is to create a line of cards in alphabetical order. The challenge is, you can only add new cards on the left or right side, so if you skip letters, you can never add them in later. At first glance this would seem like the token “easy game for children”, but it’s not. There is a lot of strategy and planning involved here. Cards are chosen in a drafting style, where every player gets a chance to choose or pass on one card. If none of the players choose the card, it is a reject. Four rejected cards end the round, and players score by the number of cards in their line. You can play single round games, or you can play up to 25 points.

The one game that includes the pattern element of the cards is Grabell. This is another fast paced game, and although it is recommended for 2 – 7 players, there is a major scoring aspect that just can’t happen in a two-player game. The game is a snatch and grab pattern recognition game. The game starts with every player getting one card in the palm of their hand, and the rest of the deck spread out in a messy, face-up pile on the table. All at the same time, players start grabbing cards that match either one of the 2 letters in the previous card, or the border pattern of the previous card. Accuracy is important, because at the end of the game, your stack will be verified, and if you have even one mistake, you get zero points. The unique thing about this game is that the end of the game is decided by the players themselves. At any point in the game, a player can end their game by slamming their stack on the table while shouting “Grabell”. If you aren’t the last person to stop, you get a 10 point bonus. If you *are* the last player, your bonus is equal to the number of cards still on the table. This is great if you can get the game to end early, not so good if almost all the cards had been taken. I didn’t get the chance to try this one, but it sounds like a lot of fun.

Even though I didn’t have the opportunity to play all the games in the book, what I was able to try was enough to show the versatility and creativity of this game system. If you love word games, you will enjoy this game. Even if you only sort of like words, you will still be able to find a game for you.

You can back the newest incarnation of the ELL Deck, featuring the game CATEGORICKELL, on Kickstarter until March 25, 2020.