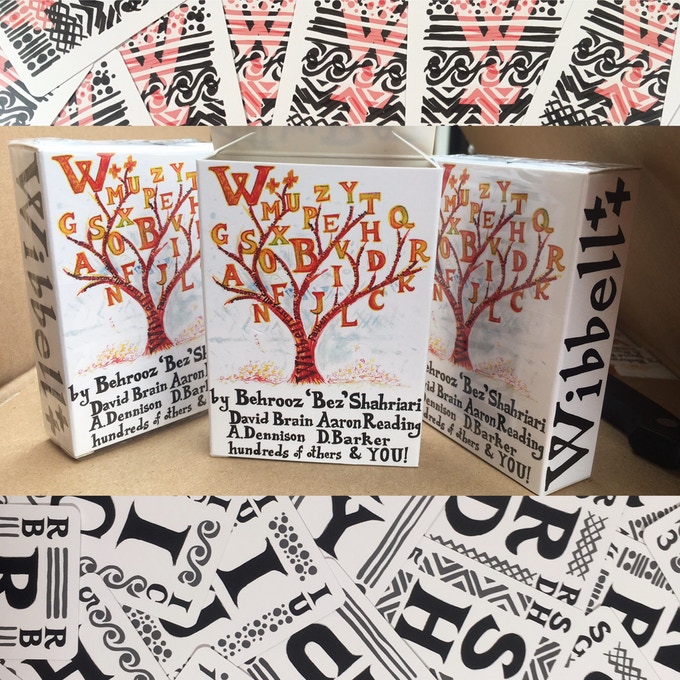 Wibbell++ is a versatile, and very cool, card-based word-building system of games from Stuff by Bez. The each of 48 cards is made up of a unique pair of letters, and one of six border patterns. The top letter will always be either, A, E, I, O, N, R, S, or T. These are the most common letters in the English language and appear on six cards each. The bottom letters will be one of the remaining 16 letters of the alphabet, and appear on between one and five cards, depending on its usefulness when constructing words. The border patterns serve a dual purpose, it may have an active role in gameplay, such as in Grabbell, or as a relatively balanced way to remove cards to shorten a game. The first edition of Wibbell++ contains the rules for five “core” games, with more games available online. Each game is vastly different from the others but they are all still fun.

The original Wibbell (4-7 players) forces players to call out increasingly more difficult word choices, with the person in the lead during a round challenged to use more letters in a single word.

Grabbell (2-7 players) is all about speed and pattern recognition.

Phrassell (5-15 players) uses the one card as inspiration on a topic and two more cards that players will use to create a four-word phrase. It has one of my favourite first-player mechanics ever.

Alphabetikell (2-5 Players) has players creating a line of cards, they can only add letters at the beginning or end of their line, but the sequence must remain in alphabetical order. Players score 1 point for each card in their line, up to an obvious 26 points.

The second edition of Wibbell++ is on Kickstarter until February 21, and along with some functional design changes, it adds a sixth “core” game into the box.

Coupell (2 players) is a cooperative game where each player is trying to help their partner build words of four or more letters. For each completed word that player removes the first three cards, and scores a single point for each remaining card in the word. So, a four-letter word would score one point and a six letter word would score three points.

On their turn, a player adds three cards to the end of their face-up “hand” and can take up to two actions in any order. They can move any one card in their partner’s hand from one position to another. They can take one of their own cards and place it anywhere in their partner’s hand. Lastly, they can claim a word that is correctly spelled in their own hand, removing and scoring those cards. An interesting thing to note is that a player can’t manipulate the cards in their own hand except to claim a word. We actually had to stop, re-read the rules (which doesn’t take long) just to make sure we weren’t playing wrong because that just seems odd.

Here’s the hardest part of the game. When the deck runs out, each partner gets one more turn before the scores are counted. When it is, the score needs to be EQUAL. If either partner has more points, they don’t win, instead, both players lose. Prior to that, if either partner ends their turn with more than eight cards in their hand the game also ends, and both players lose.

Coupell is a game that plays almost every one of my weaknesses. Happily, I played with someone who’s thought process fits more with this type of game so it was still enjoyable for me, and they loved it. Even though it wasn’t a game I would ordinarily play, it was really a fascinating experience.

The great thing about the Wibbell++ system is that if you don’t like Coupell (for example), you may love some of the different core games or the other games online. You could even create your own game and submit it. There is something here for most people, even if you aren’t a particularly big fan of “word games”.

As I write this, the second edition Kickstarter only has a few days left and isn’t quite at its goal. There aren’t really any extras, which sometimes makes for a hard sell in the crowdfunding world. Combine that with it’s a reasonably low entry pledge level, at only £17(GBP) or about $26 (CAD), it’s a challenging project to get funded. But when you factor in that you get six core games, and many more online, this is a really good project to consider backing.