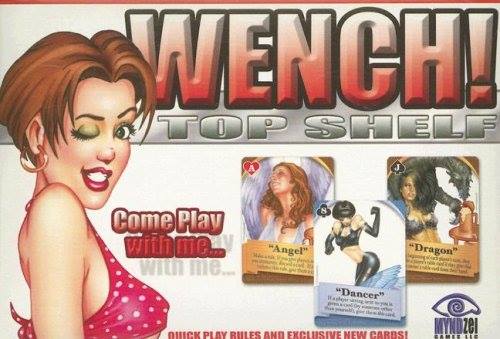 [While Wench! can be a “drinking game” it may be played with or without the consumption of alcohol. If you choose to include alcohol in your game, please do so responsibly.]

Wench! has a number of descriptive tag lines. “an exciting social card game”, “The Thinking Drinking Games”, “The Drinking Man’s Thinking Game”, and simply “Come Play With Me”, all appearing in various places. But at the end of the day, let’s just call it an entertaining casual card game.

Each play starts the hand with five cards, and on their turn, they must take one of three actions:

The goal of the game is to give away all your cards in your hand first. To do that requires a fair bit of paying attention by players.

The gold Table Cards have some sort of rule on them and when a player breaks the rule they suffer the listed consequences. Usually, that consequence involves the card owner giving the rulebreaker one of their cards, and paying the agreed upon penalty (such as take a drink).

The gold Gear Cards are single-use cards, that require every player to take a specific action before being discarded. There is only a single Gear Card in each suit (I promise I’ll come back to that) for a total of only four cards.

The third type of card is blue and has a Wing Icon. These cards also have rules, but until the rule is broken, no one will know about it. If another player breaks a rule on a Wing Card, the owning player reads off the rule and gives the rulebreaker a card. This could set off another rule in another players hand, and so on.

Unless otherwise specified, whenever a player is allowed to discard or give away a card they may choose any card from their hand or the card in front of them on the table. As soon as a player has no cards in their hand, they win. The remaining players add up the value of the cards in their hand (2-10 with A, J, Q, K also being worth 10), and the player with the highest points is the loser. The winner, in consultation with the other players, then chooses a silly or moderately embarrassing penalty for the loser, before starting a new game of Wench.

The deck includes 54 cards, or a standard playing card deck including jokers. You can’t use a standard deck to play Wench, but you can totally use a Wench deck for any other card game. If you do, just make sure you remove the three blank cards, with no number or suit, that can be customized.

The big visual draw for Wench is the pinup art of Monte Michael Moore. Moore has two decades of fantasy gaming illustration, but in Wench he had the opportunity to showcase a variety of themes and art styles, while still keeping with cheesecake imagery. I absolutely adore some of the artwork, and absolute abhor others, but I think anytime you have more than 50 individual pieces of art that’s going to be the case. I think the thing that irks me the most is not the variety of the art, but rather that there doesn’t seem to be any real cohesion to it. If each suit or card rank had a common thread it would bring the appeal up and possibly even change my opinion on some of the art. I will say that the pinup style of art isn’t for everyone. I have almost an equal number of friends who would not feel comfortable playing this and I do friends who would want to recreate the card art for a photo shoot or performance. It took some time to get this played, just based on having such a diverse player base.

The rules sheet says the website www.PlayWench.com has suggestions and expanded or variant rules, but as I write this that website appears to be down. I’m sure I’ll go look again next time I have the proper players for this.