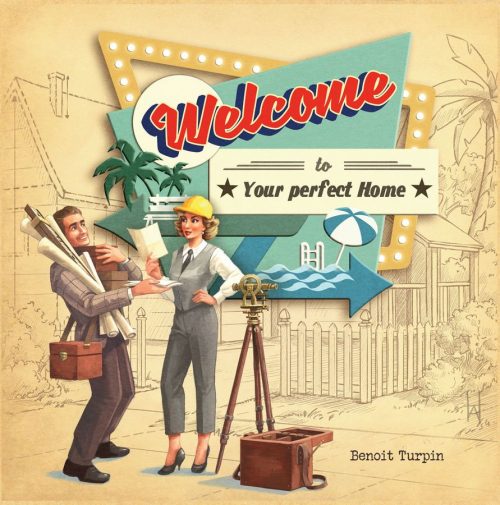 [Action] and Write games aren’t “new” but over the last few years they have undeniably become the “new hotness” in gaming. It seems everyone has one or wants to make one. It’s not surprising from any angle. For the publisher, they are comparatively fast to develop and inexpensive to produce. For the player, they are fast to learn and comparably inexpensive to purchase.

Welcome to… is probably one of the more popular games in genre, having become almost ubiquitous at tabletop conventions. I’m quite frankly surprised it has grown even more during the covid-times. (I’ll come back to that)

The basics of the game are that every player has an identical map with three rows of houses. The cards have a house number on one side and an action on the other, and they are shuffled into three equal piles. The top card of each pile is flipped over, creating three combinations of number/effect. All the players simultaneously choose one combination, writing the number somewhere on their map and using the matching effect. Numbers must be increasing from left to right (you know, like on a street of houses) but not necessarily sequential. (1, 5, 9 is fine, 1, 5, 3 is not) End scoring is based on what actions you took during the game, plus and any other goals a player accomplished.

There is a free “scoring app” that may well be one of the best accessories for the game, and one of the best such apps for any game. Why? The structure of the game is such, that the easiest way for app to score the game is to just use the app in lieu of the paper map. Beyond the obvious environmental benefits, this makes playing remotely even easier. Just download the app and someone puts the cards on camera. Done.

Switching over to the app from the paper maps immediately improved my enjoyment of the game. Any game that requires disposable components just sort of irks me. Having those maps is important, don’t get me wrong, not including them would irk me more. But not using them just feels better to me.

You can find Deep Water Games online at deepwatergaming.com or on Facebook at facebook.com/deepwatergames.

Blue Cocker Games is online at bluecocker.com or on Facebook at facebook.com/bluecockergames.