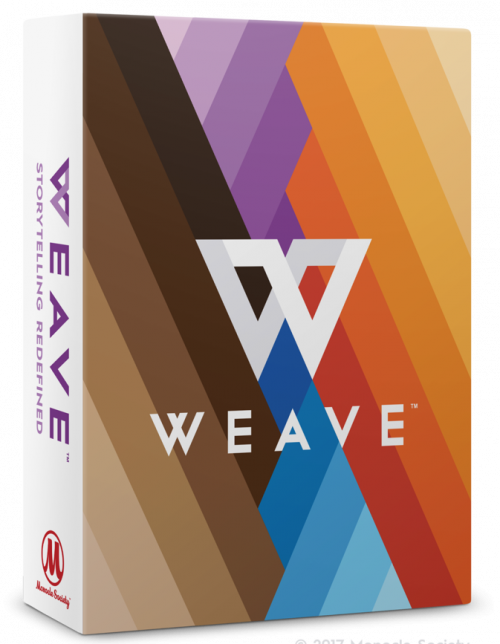 The use of technology in tabletop games is a contentious one. I love using apps like Herolab for my RPG Character sheets. Online simulators have changed how designers test and promote their games. Augmented Reality and Virtual Reality have HUGE potential. The list goes on. But when does technology stop being a bonus and start becoming a hindrance? You can pick up an old 3D comic book, put on some blue-red glasses and it’s still good to go decades later; but you can’t run Snapchat on an older iPad. With all these uncertainties, I was excited to try out Weave. I’d heard great things about it and was curious to see how they would integrate the technology.

So, I open the box and the first thing I see is an expected “make sure you DL the app.” There were six custom dice, a set of tarot-sized cards, and that’s all. Not even a rulebook. That’s ok, the rules are in the app or online, not the end of the world.

The concept is simple enough, the GM chooses a “playset” that acts as the framework of the world for the game to come (a Season, broken down into Episodes). Then they scan a series of cards, to create the Theme, Location, and Boss. Meanwhile, the players follow a similar process for creating a character. The group then collectively creates a story in a freeform roleplaying game.

There are obviously more rules than just that, but the rulebook is frustratingly vague on a lot of points beyond that. I’m not going to go into those specifics today, mainly because I don’t know that this game is going to still exist. Their website doesn’t seem to have been updated in over a year and their social media appears dead. There is some sort of beta software available, but I haven’t been able to find out exactly what it is. The current software has been very glitchy for me, and isn’t very intuitive. No, that’s not quite true. The initial character creation for players and Season setup for the GM is actually fast and does a great job at being user friendly. But after that, not so much.

To be perfectly honest, I wasn’t even going to review this game because of how much information seems to be missing. But I’ve had a number of conversations about this sort of thing crossing my newsfeed lately, so it seemed relevant.

If you are looking for a new game to learn, maybe hold off. If you have a friend that already knows the ins and outs of Weave well enough to get you going, it seems like a ton of fun. I’m disappointed and a little frustrated with my experience, but if Monocle Society comes back from whatever limbo they seem to have fallen into, I hope to try this again. The concept is great, and the execution may have been equally great at some point, but it seems to be decaying as time goes on.

I’m not even going to add Monocle Society’s website or Facebook here, as there doesn’t really seem to be any point right now. My questions directed to them remain unanswered as of this writing. For now, it seems to be the poster child for why tabletop games belong on the table, not the tablet; but I honestly hope I have the chance to experience Weave the way it was intended.