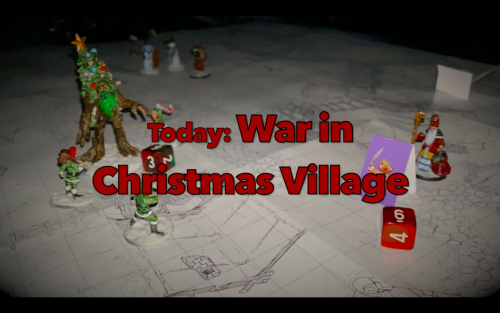 Ever since Jaymz joined TheRatHole.ca with his show, Slinging Paint, one of the most popular features has been Jackalope Enterprise’s War in Christmas Village. When this post goes live, he will be in the middle of his fourth series: The Mistletoe Misfits.

The miniatures were original conceived as exactly that, a line of miniatures that could be used in other games. But over the past few years, Jackalope has been developing a playable ruleset specific to Christmas Village. This year Dave took the opportunity to test out some new recording gear and connected with Jaymz at Apt to Game in Edmonton to play through a game. Although it’s designed to be played with 3D terrain that you use from your typical Christmas display, we used a line art version of a 2D map from Dr. Mapzo’s Patreon page.

Thanks to Apt to Game for the space, and The 427s for the music.

The Rosemary Clooney version of Suzy Snowflake is the original and arguably better, but the WGN-TV Chicago one is cuter. Maybe someday Suzy will make an appearance in a future Christmas Village set. Until then here’s both versions of the song: