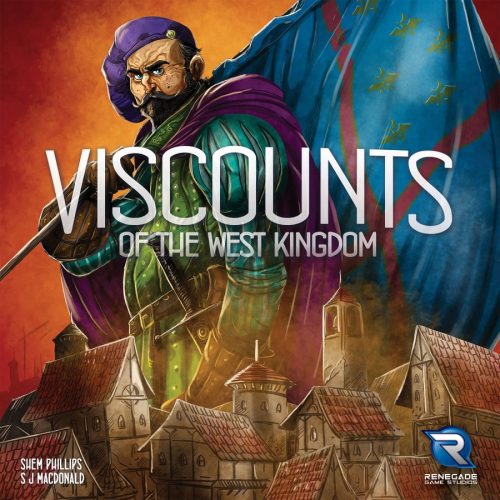 Have fun stormin’ the castle

When I first saw Viscounts of the West Kingdom on Kickstarter, I thought, “the centre piece looks gimmicky. They must be running out of ideas”, but I still backed it since I really liked Raiders of the North Sea and LOVED Paladins of the West Kingdom (Architects was okay).

Forward to a few weeks ago and Viscounts shows up at my door. I read through the rules, tried a partial 2-handed “2-player” game and thought, “Hmm, there might be something here”. I convinced my wife to play and wow, I was impressed. As a “cult of the new” type of gamer who typically only plays a game a couple times before wanting to play something else, I’ve played this game 7 times in 2 weeks (with a family that doesn’t play a lot of games), if that tells you anything.

Get on with it man. How does it play?

After setting up the board, randomly, shuffling the townsfolk cards and the manuscripts, plus counting out the Deed and Debt cards (depending on player count), each player will choose a colour, grab a playmat and set up their individual pieces. Finally, starting with the last player and going counter-clockwise, you’ll choose a starting townsfolk (to add to your personal set), which makes your deck a bit unique now, as well as “starting resource” card, which also shows your starting space on the board.

You’ll start with a hand of 3 cards from your deck. On your turn, you’ll start by advancing any played cards on your mat, play one of your cards to the new opened space, and advance your Viscount on the board.

Each card has 1 or 2 icons on them, which are used for the various actions available. Those actions are 1) Trade 2) Construct a Building 3) Place a Worker in the Castle or 4) Transcribe a Manuscript. There may also be immediate, while displayed or drop-off actions/items on the bottom of each card as well. Depending on what’s shown, you may do/gain something as soon as the card is played, have a special rule for you while the card is in your display or do/gain something when the card is advanced off your mat.

Without going into a lot of detail for each action, you’ll use a combination of card/mat icons and resources (and icons on cards on the board where you are) to complete the action. After completion, you’ll have the option of buying the card displayed in your area, resolve collisions (which happens when your corruption and virtue meet), then draw back up to your hand size.

It sounds like a lot but goes very quickly. Each phase is listed at the top of each player’s mat and is easy to follow.

The game ends when one of the stacks of Deed or Debt cards is depleted.

With so many paths to victory, each game plays out differently. You can try to do a little bit of everything or concentrate on a particular strategy, be it Buildings, Manuscripts or placing workers in the Castle.

The game plays at 1-4 players and I’ve played each count a number of times (except 1 and 4, which I’ve only played once). Honestly, I enjoyed all of them (I’m not much of a solo gamer but I did enjoy my play). Each count plays a bit differently, mainly because there are more/less people taking things or placing in the castle. Otherwise, each count plays very smooth and takes about the same amount of overall play time (about 90 minutes, once everyone knows what’s going on. Solo took about 40 minutes).

As I mentioned at the beginning of this review, I LOVE Paladins of the West Kingdom but I think Viscounts has taken over the #1 Shem game spot for me. Not as “heavy” as Paladins but possibly more strategic. So many options but at the same time, you only have a few actions to choose from (and you only do one of them each turn).

If you enjoy any of the West Kingdom or North Sea games and like your games a bit thinky, I would definitely give this one a try. I give it a 9.5 out of 10. Highly recommended.

Renegade Game Studios is online at www.renegadegamestudios.com or on Facebook at facebook.com/PlayRGS.