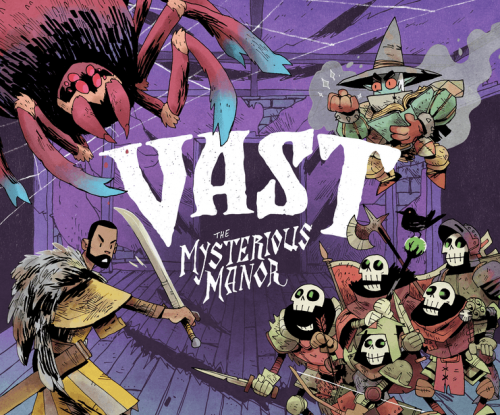 Vast is, as the title may imply, a vast game. There are two different, but complementary, editions: The Crystal Cavern and The Mysterious Manor. Both games are structured in a similar way.

Vast is an asymmetrical game, where each of the players takes on a different role with a different playstyle and different objectives. There are rules for changing out roles equivalent role between games, but today we are only going to look at The Mysterious Manor.

The Paladin is the “hero” of the game. Their goal is to kill The Spider. They start with three Hero Cubes that can be assigned to a variety of actions. As they Crusade, and reveal more tiles on the board, they will do battle with Skeletons, The Spider, and Poltergeists sent by The Manor or Warlock. As a reward, they gain Grit, which in turn, gives them more Hero Cubes to use for more actions.

The Skeletons are the undead spirits of The Manor’s former inhabitants. They want to kill The Paladin. The Skeletons can move around the grounds surrounding The Manor, or between any tiles that have a pit on them. Each of the five Skeletons also has a unique ability, that can frustrate, hinder, or outright damage The Paladin or Spider. For example, when Stabby hits the Paladin they can force the Paladin to lose 4 Grit, which could cost them a Hero Cube until they can regain that Grit.

The Spider is a shapeshifting monster who wants to gain 12 Terror and escape from The Manor. The Spider has three forms, a Giant Spider, a Sorcerer, and multiple Spiderlings. Each form has different abilities, but when any of them are hit, a Spiderling is removed from the game. When the Giant Spider or Sorcerer is hit they change forms with a Spiderling being removed and the remaining Spiderlings being placed in the tile occupied by the other form. The Spider is probably the most strategic of the roles, as well as the most vulnerable. The Spider can affect, and be affected by, The Paladin and Skeletons. However, The Skeletons should probably only do this in retaliation or to prevent the Spider from winning, since directly damaging The Spider helps fulfil The Paladin’s win condition not their own.

The Manor wants to complete 14 Seals. To do this they can rearrange tiles (The Manor IS the map, after all) and move their avatar in the physical realm, The Wraith, in specific patterns shown on ritual cards. The Manor uses Omen Cubes to take actions very much like The Paladin uses Hero Cubes.

The Warlock is a villain who wants to dominate any combination of five treasure or Poltergeists pieces. The Warlock can’t directly interact with the other roles, but the treasure and Poltergeists they place can be a direct boon to other players. I’ve honestly never played a game with the Warlock in it.

The game is “best” played with a full five players, one per role. But there are rule tweaks to play with two-four players and an entirely separate solo mode. Because the Warlock is essentially a passive role, they have always been the one left out, and they aren’t even an available option in two-player games.

The solo mode is a bit different. Called The Paladin’s Journey, the player takes on the role of –wait for it– The Paladin! The goal is to reveal the six tiles with a Poltergeist and kill them all. The game is lost if you reach 0 Health or 12 Terror. The only opponents are AI-controlled Skeletons and time. The Skeletons power is controlled by tracking Stability which is increased when pit tiles are revealed. Terror controls the power of Poltergeists and increases any turn The Paladin doesn’t hit a Skeleton. There is also a “campaign play” mode that just increases the starting difficulty in different ways.

The solo mode for Mysterious Manor is… okay. Apparently the solo mode for Vast: The Crystal Caverns has options for every role, giving it a bit more replayability. I did try playing this with The Haunted Hallways expansion, replacing the Skeletons with the new ones, and The Paladin with The Armored Knight. I tried to make as few changes as possible to the rules, and it worked surprisingly well. I was disappointed THH didn’t include adapted solo rules, given that it shows the same 1-5 player count as the full game. But it’s not technically wrong to say that, but I’ll discuss The Haunted Hallways in more detail another day.

All told Vast is a fun game. If you don’t enjoy your first game, I’d strongly recommend playing again with a different role. The experience is (excuse the pun here) vastly different with each of them. The volume of “stuff” in the box that is needed for solo play means I’ll probably only play it if I’m setting up for a group game anyway. I definitely will play this again whenever the opportunity arises. The same goes for The Crystal Caverns (which I’ve only played once) and any other version of the game that may come out down the road. It is a solid enough game that I would be more than happy to see another full version come out in this “series” or a reskinned version with a slightly different theme. The Manor/Cavern just screams rogue computer and both the Spider/Dragon and Skeletons/Goblins would fit several Sci-fi tropes. I’m off to make a note about that idea, but in the meantime go pick up a copy of Vast for yourself.

You can find Leder Games online at ledergames.com or on Facebook at facebook.com/LederBoardGames.