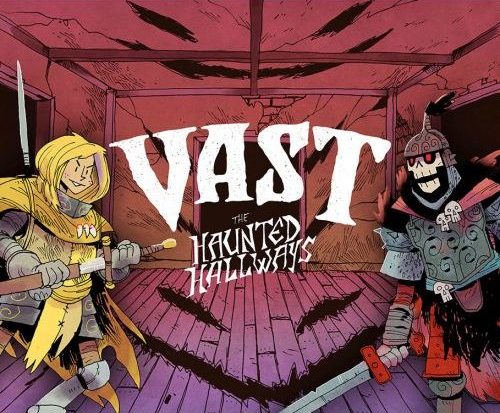 A few weeks ago I looked at Vast: The Mysterious Manor. The Haunted Hallways is an expansion to that game, with connections to Vast: The Crystal Caverns. Because this is an expansion you might want to read the previous review before this one.

There are basically two parts to The Haunted Hallways. The first part upgrades many of the components in the core game to replace the original cardboard tokens. The Manor gets upgrades to the Treasure, Poltergeist, and Force Walls tokens (which they share with The Warlock, but are colour-coded to The Manor, except treasure chests). The Paladin gets a figure to replace the Pillar of Light standee. The Spider gets upgraded Web and Egg components.

These are all great, but it’s important to remember a few VERY important details. First, and most people should realize this, that these upgrades are intended to replace the existing cardboard not add to them. Components are intentionally limited, and this expansion isn’t intended to change those limits. The second issue, and this caused legitimate issues in one game, is that the terms “Marker”, “Token”, “Standee”, and “Figure” are explicitly defined in the rules, and to the best of my knowledge these upgrades are not intended to change the status of the original components. For example, Webs and Eggs are tokens, which is defined as “a round cardboard piece” but with this expansion, the upgraded pieces could fall under the definition of a Figure; “a cardboard standee or plastic miniature.” but they are still tokens. This can cause friction if you have rules lawyers at your game table.

The second part of The Haunted Hallways is several new character roles, that can be swapped out, one-for-one, with the equivalent roles in the core game.

The most direct swap is The Armored Knight. In-Story she is meant to be a more experienced version of The Knight from The Crystal Caverns, and replaces The Paladin role. Both The Armored Knight and The Shadow Paladin have much larger player boards than any of the original roles, and in this case that means tracking Grit with a cube on the player board instead of a separate dial. I really do prefer this, it’s easier to remember, takes up less space, and honestly lowers the production costs. Like The Paladin, she functions using Hero Cubes but in different ways. The big differences here are that she has a ranged weapon (a javelin), armour that soaks up some damage and that can be repaired (basically a healing action), and has notably lower health than The Paladin.

The Shadow Paladin subs in for the monster role, The Spider. The Shadow Paladin chooses their actions by using Power Cards. Their goal is to acquire Ruin Cubes and then discard an increasing number of them to move up on your Shadow Track to get stronger. Once your Shadow Track is maxed out, you need to escape The Mansion. One of the interesting abilities of The Shadow Paladin is that when they reveal a tile they are allowed to place it without any open edges touching adjacent tile. A big part of their strategy specifically involves isolating tiles to place Ruin Cubes on them. Several roles won’t care about this, since they can travel through walls, while others have abilities to counter this. The easiest counter is The Manor’s ability to Shift or Swap tiles, rotating them according to the regular placement rules, but other roles have ways to handle it as well.

The last addition is four new Skeletons that can be swapped (again, one-for-one) with any of the five original Skellies. They function exactly the same as any other skeleton, but with their own abilities and gear. One of the few issues I have with this expansion, is the new “Skeleton”, Sniffy. Sniffy is a wolf. Not a skeletal wolf. Not even an obviously dead wolf. Just a wolf. Now, if they came out with another expansion (or promo figure) that brought in a skeletal werewolf that could transform into Sniffy, that would be awesome. Simon (terrible name) has 2 strength and defence, but only 4 movement. Always spawns as Simon but can spend one Stability to transform into Sniffy. Can turn back into Simon without spending stability. (You’re welcome Leder Games.)

If you want to use the new roles in The Crystal Caverns, there are rules for that. In fact, The Armoured Knight has almost no changes compared to The Knight. Having never tied I can assume that carries through into solo play as well. I mentioned in my review of The Haunted Mansion that I subbed in The Armoured Knight for The Paladin’s solo play in that game. The fact that The Paladins Journey is the only solo mode was disappointing. The fact that they didn’t even include rules to properly sub The Armored Knight into that is even more disappointing. There’s even room on the page with the Visiting the Cave adjustments. Not only does The Crystal Cavern have solo rules for all the roles, so does its expansion The Fearsome Foes. I understand that THH is labelled 1-5 Players because TMM is 1-5 players, but it just rubs salt in the wound knowing how little it can be used in solo play.

Really though, the few issues I have with this expansion are pretty minimal. If you enjoyed any of the Vast games, you’ll enjoy this as well. It isn’t “necessary” but is certainly an excellent addition to the game in every way.

You can find Leder Games online at ledergames.com or on Facebook at facebook.com/LederBoardGames.