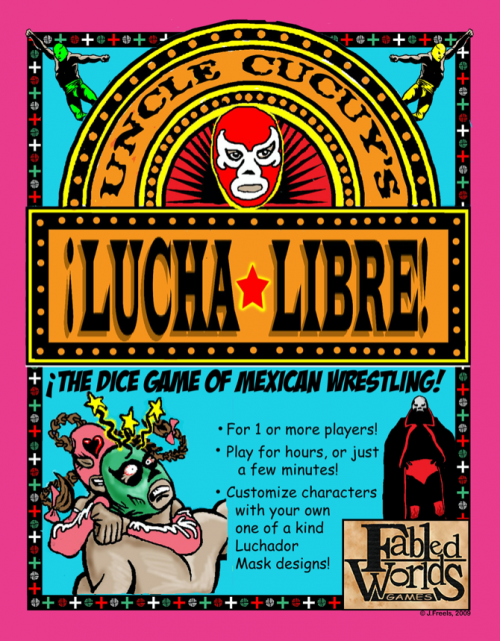 As I was looking up something for a similarly themed RPG review (sorry, no spoilers on that) I happened across ¡Uncle Cucuy’s Lucha Libre! on DriveThruRPG. It was inexpensive and intended for “1 or more players” at a time when I’m actively looking for solo games to play. Who knows –I says to myself– it may be a hidden gem.

The rules are simple. There are two (or more) Luchadores facing off against each other. There are a few pre-generated options, or you can create your own. It doesn’t actually make a ton of difference, because every character starts with the same 12 stamina, three dice assigned to either Strength or Agility and two dice assigned to the other.

A player can choose to roll using their choice Strength or Agility, but I can’t see any reason to even choose the lower stat. Both players roll, highest roll wins and with the loser taking the difference between rolls as stamina damage. There are a few other rolling bonuses, but they still boil down to the same thing.

Technically if a round (roll) is won using Agility the loser is also caught in some sort of hold, and the next round they are battling to maintain or break said hold. But the process and outcomes are the same as before. Exactly the same. Zero mechanical difference in any way shape or form.

There are “alternate” rules for teams. Rules for weapons that honestly seem to be the only thing that makes any sort of difference, adding one die that is randomly modified between -4 and +3.

A Luchador loses the match if they have been reduced to 0 Stamina or if they are pinned for 3 rounds. (There is no definition of what constitutes a “pin” so I simply defaulted to losing three rounds in a row.) The winner of a match is awarded 100 Glory Points, which they can later spend between matches to buy an additional die at a cost of 100x the stat they want to add the die to, and they also gain 5 Stamina anytime they buy a die.

The game is designed to quickly kill some time for a few minutes and it succeeds at this. I also appreciate the upgrading mechanics. They are straightforward and effective. But those things don’t make the game. If this was billed as a mechanical framework to tell a story in the ring, I might have a different view. But unless you invest the time to building a character, nothing you “choose” to do makes any appreciable difference. This is the reasonable start of a good game design down the road. But as a standalone product, even a cheap one, it’s a disappointment. The publisher listing on DriveThruRPG also includes a rules-light D2 RPG game that I was curious about, but this, unfortunately, changed my mind about getting it.

You can find Fabled Worlds on DriveThruRPG.com, but any other website/contact info they listed has long-since expired.