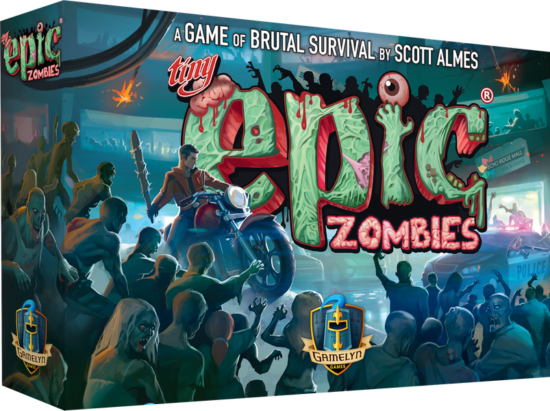 While I haven’t played anywhere close to all of Gamelyn Games’ Tiny Epic collection, I have played enough to recognize a very common misconception about them. Many people look at the “Tiny” and assume that it means the game will be simplistic. That a game in a small box inherently means a lighter play experience. At least in the case of Tiny Epic games, that’s just not accurate. Tiny Epic games are unfailingly Tiny in box size, but Epic in gameplay. Tiny Epic Zombies is no different.

I specifically said tiny in box size, because the games themselves are rarely tiny. I played Tiny Epic Zombies on a table the size of a decently large coffee table, and we used the entire space. If this was a Tiny Epic game, it would be pretty big.

The board is made up of a central courtyard, where players start and non-player “survivors” are hiding, surrounded by nine store cards. Each store is double sided with slightly different options on each side. Each store has three rooms, and are considered adjust to another store if they share a wall (thematically players and zombies are moving through holes broken through the walls).

On their turn, a player MUST move 1 room, if the new room contains a zombie they may make a Melee attack to kill it. While not always the best idea to kill the zombie, why are you playing a zombie game if you don’t want to kill zombies? Plus, in most cases, it’s just a good idea. When a player does a melee attack on a zombie they are always successful but roll a custom die to see just how successful. They have a 2/6 chance rolling overkill, which allows them to make a free move. They have a 1/6 chance to receive one or two wounds. The remaining 2/6 are just a success, with nothing else happening. Regardless of the roll, the zombie is killed and removed from the board. If a player moves into an empty room they can make a ranged attack on a zombie in an adjacent room. They don’t roll a die, or risk taking wounds with a ranged attack, but instead move the bullet marker down one space on the wound track. Yes, wound track. Players all start with zero wounds and nine bullets, that are both tracked on the same line. A player gains wounds and loses bullets, bring those markers closer together, and if they ever meet or cross that player’s character is eaten alive and becomes a zombie themselves. The player then chooses a new character and continues to play with them.

The main version of the game is an asymmetrical cooperative game, with one player controlling the zombies against the remaining players, who are working together to complete three random objectives. However, there are also fully cooperative (with an AI zombie master), competitive, and solo variants. I love games that have multiple play options, but the solo version is just the full co-op version with one player controlling two characters. I’m always torn by games that have this style of solo play. On the one hand, I appreciate that they acknowledge solo play is a thing. On the other hand, any co-op game can be solo like this, so it feels a bit like a cop-out just for marketing.

There is a fair number of things happening here, which does increase the learning curve a little bit. But once we got moving, everyone I played with absolutely loved this game and wanted to play it again.

Let’s talk about components. Part of what makes these games Tiny is the care taken to just downsize. A regular game might have a full sized 4-6 fold board for the stores. Gamelyn Games uses above average cardstock to create double-sided, modular, board that takes very little space to store. Similarly, many of the components are still amazing quality just smaller than average. The most interesting component is the player pieces. Tiny Epic games no longer use standard wooden Meeple, they now use a molded plastic version that has small holes that items can be placed into. These ITEMeeples actually hold the weapons they acquire in the game. I don’t want to say this is amazingly innovative. But it is a giant leap forward in meeple technology.

I don’t think I’ve ever played a Tiny Epic game that I haven’t enjoyed, and they seem to be getting better and better with every new release as they push the boundaries of what they can pack into the box.