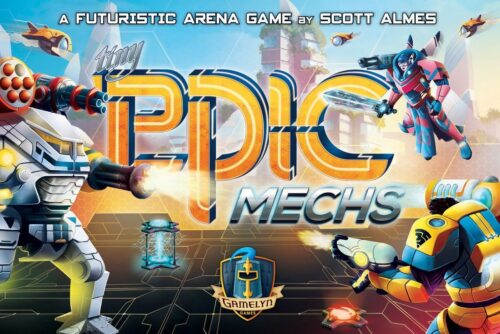 I mentioned this when I reviewed Tiny Epic Zombies, some time back, the only thing tiny about the Tiny Epic games is the box size. Tiny Epic Mechs is no different.

Just to get this bit out of the way, you might be able to play this on a card table, but we found a small dining table to be a bit more comfortable for how we organized the various components. The card/tile built arena board comes out about 14″ square, each player will probably want roughly a placemat size area for their own stuff, and their needs to be space for loose items. On top of that, there are two rows of weapon cards, plus oversized cards for tracking the score and what round the game is on. For such a tiny box, they manage to pack a deceptively large amount of stuff in there. I’m not saying that’s bad, just that it’s easy to underestimate the space you’ll need.

The rulebook isn’t as long as it looks, but it is very detailed. The level of detail is necessary, but it can also be intimidating. I often play with people who have a huge amount of difficulties following rulebooks, so that was a bit of a challenge. But once you get playing it runs fairly smoothly.

You’ve probably heard the term “Meeple” before, yes? Okay, for that one guy in the back who’s new (welcome to your new addiction, btw) a “Meeple” is a small player marker that is usually person-shaped (unless it has a reason not to be), can be used standing up or laying flat, and are most commonly made of wood. Gamelyn Games has given the traditional Meeple a hefty upgrade to create the ITEMeeple. These next generation Meeple are plastic, with holes moulded into their hands allowing them to hold weapons and other items. ITEMS. Meeple. ITEMeeple. And we’re on the same page again, back to the game.

The next thing to do is set up the Arena that battle will take place in. Setup varies by player-count, but at the center is always the Mech Zone Card, which is the starting point for the Mighty Mech armour. surrounding that are randomly placed Resource Zone Cards and each player’s Base Card.

Once everything is set up, all the players will pre-plan (program) their four actions for that round. The options include movement; purchasing a weapon; deploying a turret or mine; collect resources from any Resource Zone Cards you control with a turret, mine, or your ITEMeeple; or powering up, to heal or upgrade to your Power Armor mode.

Combat is the most complex part of the game, but it basically boils down to is anytime two players are in the same space, they battle back-and-forth until one player has used up their equipped weapons (and are forced to retreat) or a player is KOed (which is treated differently depending on that player’s status at the time). The loser of the battle goes into “Ad Hoc Mode” and pick up their programmed cards, they will finish the round by taking their actions from the cards in their hand.

There are two more important elements I glossed over. Power Armor and the Mighty Mech. A player can purchase any weapon they can afford, and any time (via one of their programmed actions). However, in Pilot Mode, they are only able to carry two Basic Weapons at a time. If a player programs the Power Up action, they can pay to upgrade to their Power Armor Mode, which lets them hold two Basic Weapons and two Advanced Weapons. If a player in Power Armor is at full health and they enter a space with the uncontrolled Might Mech they can take control of it and carry four Advanced Weapons. The downside to the Mighty Mech is that the player controlling it may not use the Power Up action to heal, but being KOed while in the Mighty Mech isn’t a severe as it could be.

There is also a Solo Mode that can be played using the same Arena setup as the three-player game, with a single-player and two “robot” pilots. Even if you aren’t a huge fan of solo games, it provides a good opportunity to get used to the complexities of the game before playing with friends.

Regardless of which way you play, scoring is the same and the highest score at the end wins.

Holding items is a nice touch, and lets you see at a glance what you are up against before battle. But where the game gets extra fancy is the Power Armor and Mighty Mech suits. They both use the holes in the ITEMeeple to keep the basic figure in place as it snaps together around it.

I understand the desire to keep the Tiny Epic games a consistent box size. But I often wish they had a bit more space for components, and to allow the cards that make up the Arena (or whatever play space the game has) to be upgraded to a heavier material that stays in place a bit better. But really, if staying consistent is the worst complaint I can come up with, I think I can let that slide. The game itself is a ton of fun, and once again lives up to the important part of its name. Epic.