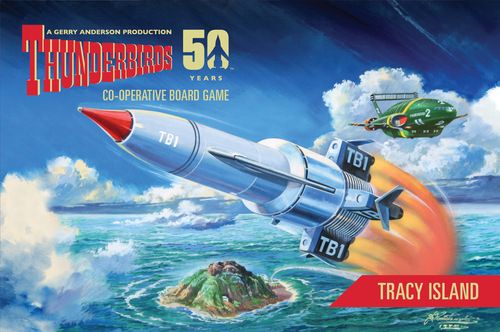 Wow. I can’t believe how long it’s been since I pulled out Thunderbirds. It’s been a little over two years since I reviewed the base game. I’ve often recommended it to people, but you may have noticed I’ve had other games to review. One silver lining of isolating in the current pandemic is the chance (read: “need”) to pull out more solo games. The reason I reviewed The Hood expansion when I did, was because it is the only expansion that cant be played solo. Tracy Island, however, can.

If you haven’t read my original review of Thunderbirds, you might want to do that before reading on. I’ll still be here when you are done.

The Tracy Island expansion adds a handful of new components, that add a whole lot to the overall game. The biggest impact is from the three new characters: Tin-Tin Kyrano in the Ladybird Jet, Parker in the FAB 2 yacht, and genius engineer Brains, whose home base is on Tracy Island (now a model that has space for the other figures to “hang out” and not have to always be in a specific vehicle.

Obviously, to use these new characters there need to be new disasters for them to help resolve. Instead of adding a small handful of cards, the original 47 card Disaster Deck is replaced with 56 new cards (with nine of them being randomly not used each game).

The existing Pod Vehicle tokens get a 3D upgrade with models that actually fit in the cargo hold of Thunderbird 2 even better than the cardboard tokens, and there are four new ones. There is also a board overlay for the Brains’ Notebook section that assigns each Pod a letter that is marked on the bottom of the models AND on any disaster cards that uses the vehicles.

Finally, there are four new Hood Events and four new F.A.B. cards. Only two of the Hood cards and one of the F.A.B. cards reference the new components, and you could house rule the reference to Tracy Island to simply mean the South Pacific space on the board. That makes things very easy to just mix them into the other cards and leave them there with little chance of an (easily fixed) issue arising.

In solo mode, you take control of three characters, with the ability to trade out for another character as the entire turn for the one traded out. I started with the three new characters and had a great deal of success with them. Brains’ ability to give a +2 bonus on Rescue attempts that are also using a pod vehicle bonus is a perfect complement to his ability to draw a technology token (which can be traded to build a pod vehicle) while on Tracy Island. Tin-Tin gives a Rescue bonus whenever she’s in the Ladybird Jet, but her real strength is drawing a F.A.B. without advancing The Hood when she’s on Tracy Island. It was likely the luck of the disaster draw, but Parker ended up being the real hero. He gives a +2 Rescue bonus when he’s in FAB 1 OR FAB 2 and he can remotely move either vehicle as an action from anywhere on the board.

I don’t know if Tracy Island will always be the version I play with, but I’ve definitely been having a blast with it so far.