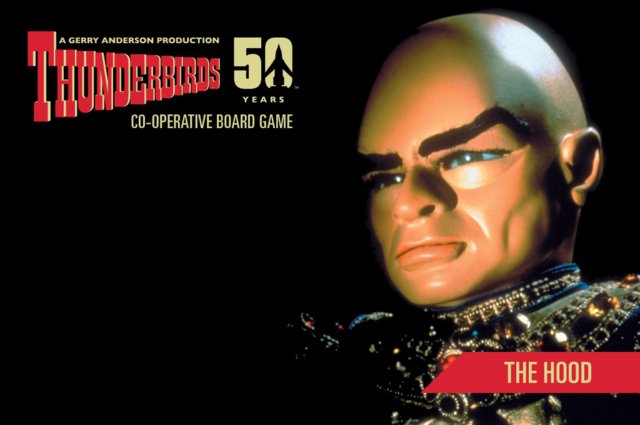 The main antagonist of the series is The Hood. A mysterious figure who, depending on the episode, swings between an enemy spy and an evil sorcerer. Often disguising himself, in an attempt to get photographic proof of the existence of International Rescue and the Thunderbirds. Equally often he is the cause of major disasters, in an attempt to draw the Thunderbirds into the open.

In the base game of Thunderbirds, The Hood moves along a track at the top of the board, revealing events that cause grief for the payers and potentially causing them to lose if they cannot defeat his three major schemes in time. By adding The Hood expansion, a player will take control of The Hood directly, acting against the players. If you haven’t already read my review of the base game, you should.

The players will go about their game more-or-less the same as they did before, although they do have access to a few additional special actions to counter The Hood. The Hood himself takes an action after every player. He now has two vehicles (a small plane and a submarine), and a character peg on the map, just like the players. Each turn he gets two actions (compared to the player’s three) and will move around the board dropping off evil minions (not what they are actually called, but they are evil and purple, they are evil minions). When he’s in a map space with a Thunderbird vehicle he can attempt to hijack it (kidnapping any players in it), or try to photograph that machine to move up the Hood Track at the top of the board.

The Hood Track also works differently with this expansion. The event cards have been replaced by a Scheme Tokens. When The Hood moves on to a new space with a token on it, he places it on the map in the same location as one of his evil minions. The players solve these much like the disaster cards and event cards, by discarding tokens or moving specific vehicles into that map space. That solved Scheme Token is then placed on the next Scheme Card along the Hood Track. If The Hood ever advances to a space with a Scheme Card, the players lose, just like the regular game.

This time around I got to play with a fan of the Thunderbirds tv show, and someone who knew nothing about it. One of the things that can be tough for games like this is how easy it is to just fall back onto nostalgia instead of solid gameplay. Thunderbirds has both and it’s great. There are two more expansions (Above & Beyond and Tracy Island) that I plan to review in the future. But for now, I am just glad to have been able to pull this one out to play again.