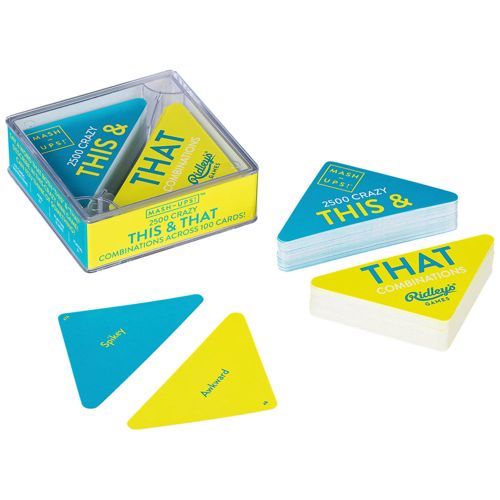 Here’s another odd bit of trivia about Debra Savage: I love hospital gift shops! Not just in the “as long as I’m here” sort of way either; I’ve been known to deliberately seek them out. I think it all started when I was young, when I was a “candystripe” volunteer at Edmonton’s Misericordia Hospital. Years later, I lived in an apartment building across the street from the University of Alberta, and I would often take a shortcut through the hospital to get to the LRT station. I think the appeal for me is the wide range of things, all in the same place. Where else could you find drinks, snacks, books, magazines, toiletries, stuffed animals, flower arrangements and knickknacks? And if you are lucky, you might find one other thing — games.

I found a copy of This and That Mash Up Cards by Ridley’s Games on a visit to the University of Alberta Hospital gift shop. It was the compact plastic box and unique triangle-shaped cards that caught my eye. There are several other games in this Mash Up series, including Would You Rather?; Who Would Beat Who? and Desert Island Dilemma. This game is an extremely simple version of the “judge the best/funniest answer” format we’ve all come to know and love. Two cards are flipped over at the same time, revealing a single word on each card. Players have to quickly think of something that could be described by both words. They have the opportunity to defend their answer, but in the end, it’s the judge who decides where the point goes. The role of judge rotates around the table, so everyone gets a chance to collect points. Sounds easy huh? But could you name something that is both Zesty and Juicy? How about something Colourful and Grumpy? Excitable and Feeble? These are all combinations that I encountered in one game.

There are many things that would make this a perfect game to play when you are at the hospital. The small box can fit in a purse or pocket, and the entire game can be played on even the smallest hospital room table. In a pinch, you could even play on your lap by keeping the cards inside the box. And the rules are simple enough for patients and visitors alike, regardless of how distracting the situation might be. This is a fast, fun game that you can play in around ten minutes. My only real complaint is that the triangular cards are very difficult to shuffle. When I played a quick game at Direct-Play Expo, 7 cards disappeared, and I only found them by chance when I glanced under the table later.

You can find more about Ridley’sGames on their Facebook page at facebook.com/ridleysgames or online at store.wildandwolf.co.uk/pages/ridleys-games.