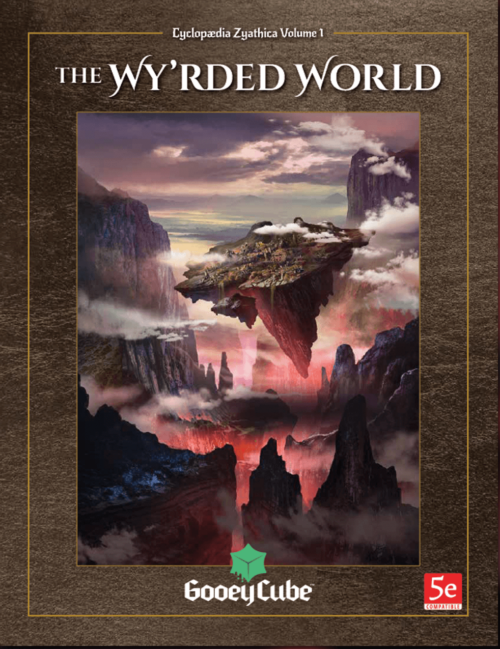 If you wander through our Index of RPG Reviews (yes, we’ve done enough to warrant a separate sub-page for them) you may notice a glaring omission. Dungeons & Dragons (5E or otherwise) isn’t there. This is intentional, but it isn’t intended to be a slight against the game. As a system, D&D doesn’t need more promotion. It’s been around forever, and there are plenty of amazing small publishers we can shine a light on instead. But thanks to the joy of the Open Gaming Licence, it is also increasingly easy for small publishers to create new worlds without needing to create new rules.

Other than CrowdFUNding Spotlights, I normally still use “no D&D” as a hard-line determining factor, even for small publishers. Then I spent a whole convention across from Alphinius Goo, the Mad Wizard behind Gooey Cube. My initial reaction was, “5E. Moving on.” As the weekend went on it became “I wish this wasn’t 5E.” Then “You know, [our Renaissance Gamer] Brent likes 5E.” So I collected a copy of the box set for the first part of their continuing campaign. I also acquired Volume 1 of their Cyclopaedia Zyanthica, a 235-page overview of The Wy’rded World in its entirely.

After some brief introductory matter, the first chapter is A Historical Account of The Wy’rded World. It is not the history of any particular nation or even a whole continent. It is the in-the-beginning biblical creation of everything.

“In the beginning of all, before anything existed, there was only AvovA… the Dreamer of the First Dream.”

It covers the birth of gods; the creation of creatures great and small; a golden age of civilization; the corruption of that civilization that lead to the Woe of Ruin that almost destroyed all of Zyathé; and a new, dangerous, era of rebuilding and rebirth.

The second chapter continues on with Magic in Zyathé. Magic in any world, and in any game system, is going to have similarities. The Wy’rded World is no different. Much of what is described in this chapter isn’t conceptually “new” but it is very well presented. There are also a number of interesting spins on things, including “Flowstones”. These gems are a physical embodiment of magic. The mining, cutting, and application of these stones could easily become the basis of an entire adventure all by itself. If I were to pluck out one thing to call my favourite, Flowstones would be it.

Chapter three is all about Cosmology and the Counting of Time and Days. Measuring time is obviously a reasonably important thing in most RPGs. I consciously understand this, just as I understand that screwing with those measurements can give an immersive and not-earthy, feel. But, to be completely blunt, I dislike dealing with that unless there needs to be a direct comparison to “Earth-normal” time. End rant – moving on. There is a brief note about the night sky, which I greatly appreciated. As brief as it is, it opens a great window to something more. I also appreciate the breakdown of the holidays that take place during the Zyanthéan year. In fact, I would love to get a Wintersdance and/or Fool’s Day themed adventure for one of our future series on holiday games.

The chapter on the Geography of The Wy’rded World is what you’d expect, covering each of the seven main continents plus the two polar continents. These lands will apparently be expanded on in future books, with the upcoming Cyclopaedia Zyathica Volume 2 focusing on the continent of Verdestia.

The two largest chapters focus on The Peoples of The Wy’rded World and the numerous Gods of Zyathé. The Gods of Zyathé are one of the most noticeably D&D aspects of this world, as they are all distinctly and specifically separated into the nine standard alignments. Aside from those godly alignments, the chapter on the “major” cultures in Zyathé is the only other place that this book trots out its dungeony dragon-ness. It doesn’t provide concrete stat-blocks, but it does cover how each race manages each area of the stats for character building.

The last full chapter touches on the different aspects of day-to-day Life in The Wy’rded World. Governments and Guilds, Culture and Industry, Travel and Languages, War and more are all mentioned; closing out with an Appendix on Money and Economics.

There’s a ton of great material in here, but a GM may not want their players to know all the ins and outs going into an adventure. So Gooey Cube’s website has a free pdf Player’s Primer that pulls out and distils the most important information that any player actually should know. Did I mention that the Primer is free? If the players want more, there is also a longer but still inexpensive Players Guide.

We’ll be looking at the first part of Gooey Cube’s Red Star Rising campaign in the near future, but until then you can find all the Gooey goodness online at gooeycube.com or on Facebook at facebook.com/gooeycube.