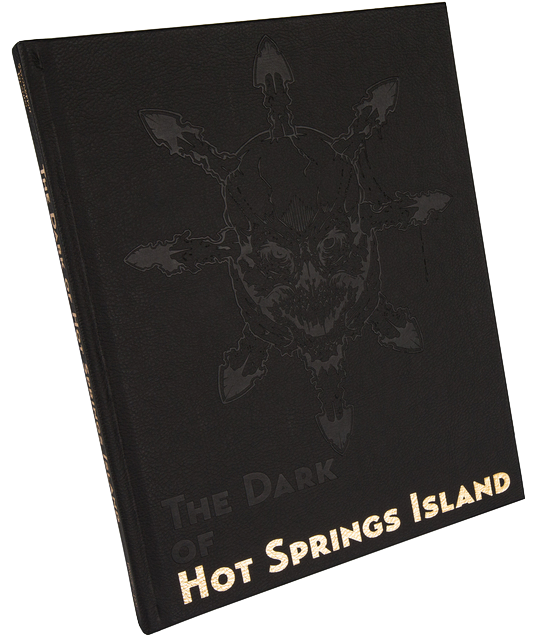 I came across Swordfish Islands by way of Jason Bradley Thompson, who re-illustrated some of the cartography for the recently released second printing of The Dark. Putting everything on paper that has been going through my head reading this book would mean closing the review site and just writing game materials, and that’s not my plan. The setting is completely system neutral, meaning the creature have no specific statistics. There are some generic OSR stats, and at least one 5E set of stats that I’ve found out in the wilds of the interwebs if you like, but the creatures are all described well enough to enough that it’s easy for an experienced GM to come up with equivalent stats in the system of their choice.

The Introduction starts with the section header “A Sandbox of Black Powder”. A similar analogy also appears on the back cover sleeve, and it’s a fitting one. The Dark book presents a sandbox world of elements, and the players are the ignition source. Put the two together and you get explosive results, with a lot of noise and surrounding smoke. But beyond that descriptive opening, this may be the most important section of the book. It is presumed that if you are reading this book, you already know what roleplaying is and how you do it and blah blah blah. It’s important to include that in a core rulebook, but not here. Here, the introduction is all about how to use the book because it isn’t like most mainstream setting books.

The island is broken up into 25 hexes, with each hex covering a 2 mile area. Inside each hex, there are three locations of interest. These locations are not in any specific point inside the hex, and usually, involve an obvious location and two that will require the players to do some work to find. Each Hex also has an appropriate encounter table. The full Hex Key section has a pared down version of the tables, that excludes any irrelevant or less likely information, and the Quick Reference section has the full set of tables that a GM could use for any game.

Rolling out the encounter has a few steps, first determine the type of terrain for that hex. It’s noticeably labeled and the Hex Key tables already account for this. Then you roll 3d6 to find the type of encounter, then again for the specific creature(s), then again for the creatures’ motivation. This method creates a statistical bell curve, and the tables in the Hex Key only account for the most likely results. For anything else, the GM would need to flip back to full tables in the Quick Reference section. Since doing this on the fly can be a tad cumbersome, it’s suggested rolling at least some of the encounters out ahead of time. Since all encounters are based on the terrain type, I would personally roll out enough to cover each terrain type, plus a few spares, and put them on index cards. When an encounter is needed, just randomly pull one from that terrain’s pile.

Many of the hexes have events or locations that zoom in and have a slightly more complex set of rills, including a “what’s happening” roll that keeps the flow of the story moving forward, but still allows a GM to reuse that location again later without it being stale. If you’re a GM who wants to be overly prepared, you can roll up these locations ahead as well, but since it’s a sandbox-style world there’s no guarantee if or when the players may decide to explore a specific location. The book recommends calling a quick break for the players while the hardworking GM rolls up that location to better fit the game at the time. Unsurprisingly, I lean toward the first option. Either way, there are several online, and mobile-friendly, resources that can allow you to circumvent the rolling to speed things up.

I’ve already mentioned the Hex Key section, well here’s what it is. It is 25 perfectly laid out pages. One page per hex, with a description of each location, a thumbnail of the hex and the surrounding hexes (for when wandering heroes decide to unexpectedly wander), and the aforementioned encounter table shortcuts. If any of the descriptions refers to another location or an NPC/Creature that reference is bolded and has a page notation. It’s beautifully user friendly. For the hexes with more detailed locations, it still gives a great deal of detail. For example, in hex 23, the second location is The Temple of Tranquility. There’s a paragraph’s worth of description for the players, another paragraph for the GM’s eyes only (always labeled as The Dark) when it mentions the Steam Imps, it sends you to page 138, and at the end send you to page 100 for a four page spread with detailed maps of each floor and a full description and backstory.

Of course, it takes more than maps to make a good setting. Hot Spring Island has several Factions of inhabitants, each with their own story and motivations. Even though there are no set stats for anything, there is a great amount of detail that’s probably more important than mere numbers. Every entry, be it a race, a class, or an individual, gets a description of varying length, bullet points for “What Do [they] Want?”, “What do [they] Not Want?”, followed by “What Else?” the GM should know.

Lastly is the Appendix. A shocking place for that, I know. Most of the appendix is taken up by the list of 300, THREE HUNDRED, treasures that ca be used, sorted by Faction. Also included are descriptions of any Beasts and odd Plants that weren’t covered elsewhere, as well as the two exceptions to the 3D6 rolling. If you roll an NPC Adventurer in the regular 3D6 Intelligent encounter table, you roll a d20 and pick one of the two options listed. All of these wandering NPCs are listed here, and if you need a rumor, there’s a D100 table (however you choose to roll that) full of them.

At the end of the day, you can take any setting or adventure from any system, and adapt it to any other system with a bit of work. Many OSR style games are even easier to do this with. But The Dark of Hot Springs Island is so carefully crafted that it’s ridiculously simple to drop the whole island, or just a location, into any game.

Take the Temple of Tranquility. Part of its lore is that it sits atop the prison of a giant monster, and a one time it was used as an aquarium. Let’s drop that into Endless Realms, the giant monster could be a giant Catfish, use the motivation of the Steam Imps but make them Brownies, and The House a Bocan.

Whether you think you’ll run it as a self-contained game, or just use it as a GM resource to pull from, The Dark of Hot Springs Island is perfect. I hope that we’ll see more of the Swordfish Islands in print sooner than later.

1 thought on “The Dark of Hot Springs Island”