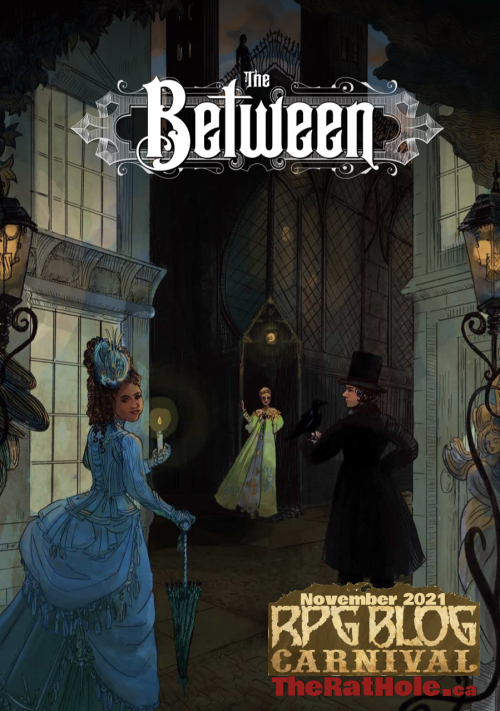 Welcome to another installment in our ongoing hosting of the RPG Blog Carnival! Monday we featured an interview with game designer, editor, and writer Jason Cordova. We talked about the hobby in general and his games Brindlewood Bay and The Between. Today we’re going to take a deeper dive into The Between and talk about why you should bring this game to your table.

My first impressions, reading through the game for the first time, was that The Between stands up favourably alongside the classic Call of Cthulhu as an excellent investigative horror RPG. I would suggest that, if you are someone put off by the large issues with Call of Cthulhu (bigotry inherent in the source material, an ableist Sanity mechanic), you will get what you want in the pages of The Between without any of that baggage.

Don’t worry, this review isn’t going to be an extended compare and contrast between the two games. Mostly because there is so much good stuff to look at in The Between, I don’t want to waste space talking about that other game.

The setting for The Between is one familiar to many of us, thanks to shows like Penny Dreadful and The Alienist: a darkly magical Victorian London. During the day the world is much as we read in the history books, perhaps with a few oddities sprinkled here and there to set it apart. But the night is when the differences make themselves felt, in terror, magic, and blood. All the creatures we consider the province of faerie tales and legend emerge from the shadows, calling the night their own.

Standing against these creatures are the denizens of Hargrave House, mysterious hunters and investigators who, for reasons of their own, take up the fight against monstrous threats terrorizing the city. As the story progresses over many sessions, the characters become aware that these monstrous machinations are the plans of a Moriarty-style criminal mastermind. Eventually the “heroes” will have to face this spider down in order to save Queen and country.

Monsters going bump in the night and their foul manipulator are only some of the mysteries the characters must solve. As the game starts the characters and their pasts are as much a mystery to each other as the creatures they hunt. This is on purpose, brings me to the first of many game mechanics I love: characters may only discuss their pasts with each other when the mechanics of the game call for it. This ties character storytelling very neatly to the action of the game, giving the players ample opportunity for cinematic character reveals. It also raises the baseline of tension, as players are aware there are secrets at play right from the start, secrets that will be revealed at possibly (probably) inopportune moments.

Tying in with this aspect of the game and controlling much of the tempo and tension of play are the four phases of play: Day, Dusk, Night, and Dawn. The Day phase is the purview of the players, for the most part. While the Keeper (game master) provides them with information (new Threats, what Questions need answering to stop it, etc.), it is the players who control where the narrative goes while the sun shines. They chose which Questions to follow up, indulge vices in order to relieve stress incurred by past actions, or initiate scenes with other characters or NPCs. The Day is often much slower paced as the players direct the course of play. Then follows Dusk, a shorter period wherein the players discuss preparations for the night to come and explore Hargrave House through narrative.

Then comes the Night, and the Night is firmly under the control of the Keeper. As relaxed as the Day might have been, the Night is when all that is monstrous makes itself felt, feral and bloody. Terrors stalk the streets and this is when the players discover just how well they have prepared. The Night also introduces another mechanic I love: the Unscene. The Unscene is another scene taking place somewhere else, simultaneously with the actions of the players. Play cuts back and forth between the players and the unfolding Unscene, delivering a cinematic feel to play. The Unscene also serves to ramp up tension, by revealing secrets and events to the players, of which the characters don’t yet (and might never gain) knowledge. It also serves to demonstrate there is a wider world surrounding the characters, and that they can’t be everywhere.

At the heart of The Between, though, is an investigative mechanic which will be familiar to anyone who read or played Brindlewood Bay. Simply put, there are no set, canonical answers to the Mysteries set out by the Keeper. Instead the hunters gather Clues, and using those Clues as inspiration, come up with a theory of what’s going on. Depending on the result of some dice rolling, their answer is either correct or new complications are introduced to the story. If the Question is answered correctly, an Opportunity is unlocked. While Opportunities can be a chance to take down the current Threat, they can also unlock other rewards, such as new moves or allies.

Personally, I love this mechanic most of all. Finding no clues, or the wrong clues, or misunderstanding the clues you have, can bog down an investigative game. How many of us have had to sit at the table, floundering to find the right bits of information, thwarted by the dice or a bad plot? But The Between neatly side-steps that issue by asking the players to tell the Keeper how the Clues they have hang together. Guess right, victory! Guess wrong, your bad situation just became worse. But it doesn’t stall; you can keep adding Clues to the pile, come up with new theories, try again. The narrative always moves forward and as we know, sometimes failure is more exciting than success.

And while The Between is an excellent game for a one shot or short (2-3 session) campaign, I think the game really shines as the basis for a longer form campaign. There are certain aspects of the gameplay and the setting which can only be unlocked with prolonged play. This is meant to simulate the Legacy-style of some board games, like Risk and Pandemic. As most of these unlocks are the direct result of player decisions and character actions, no two campaigns will follow the same series of legacy unlocks, ensuring each campaign is unique, even with the same players and characters.

What else do I love about this game? It gives strong support to the Keeper through its writing and design. The original artwork throughout (courtesy of Amanda Lee Franck), drawing inspiration from Victorian era tabloids such as The Illustrated Police News, evokes the setting extremely well while at the same time providing ample inspiration for the Keeper. Both of these are supported and enhanced by some excellent layout and design by Harald Eckmüller.

Overall, I think The Between should be your go-to game if you want to evoke that Dark Victorian vibe at your table. As I said earlier, this will neatly fill that Call of Cthulhu shaped gap in your life without any of the associated baggage. And while the game has a lot to offer experienced players, I could see The Between as an excellent introduction for newer players to both investigative and narrative style games. I would also suggest that the game “travels” well; with a bit of tweaking you could set The Between in any modern time period, allowing you the opportunity to hunt monsters and solve Mysteries in almost any era. In fact, that could be the backbone of a series of 2-3 session long-short campaigns, each moving a decade or so further in time. Or possible one Mystery is playing out in two different times, and Hargrave House hunters from each time must discover a way to work together. But even if you keep contemporary with Queen Victoria, you will find much to impress you within these pages. I’ve only had one brief session and my mind is whirling with potential future plots and schemes to bedevil my hunters.