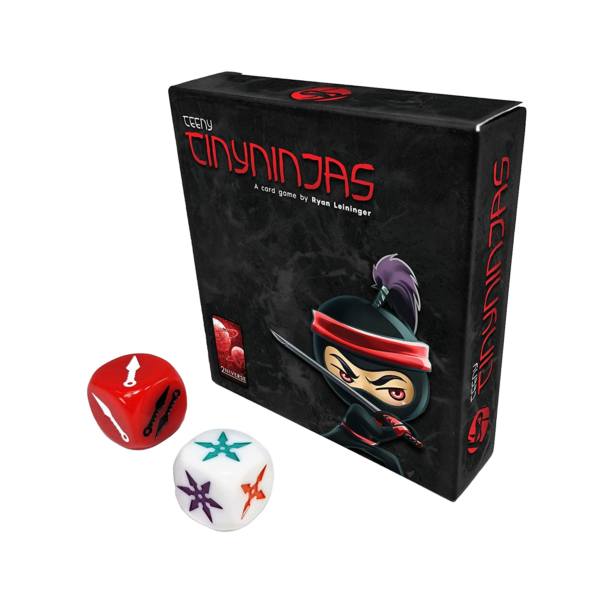 On April 10, 2019, Edmonton hosted the first ever Design and Games Awards, celebrating both computer games and “analog” games, as well as members of the local gaming community. Tiny Ninjas, by 2niverse Games, was nominated in two categories, Analog Game of the Year and Best Innovation in game design. Sadly, they did not win in either category, but Tiny Ninjas has still won other awards. However, the game I am reviewing is not Tiny Ninjas; it’s Teeny Tiny Ninjas, a Pocket sized version. So I guess what I’m saying is that I am one degree of separation from reviewing an award-winning game. Which is closer than I ever expected to be.

Teeny Tiny Ninjas is missing a few of the elements of Tiny Ninjas that put it in the Most Innovative category. It doesn’t have the game box that folds out into a game board, the 3D cardboard elements, the sensei characters, or the single player mode. This is as bare bones as you can get; just cards and dice in a single tuck box. However, in my humble opinion, the fact that there are dice and cards together in the same box is pretty innovative in itself.

Teeny Tiny Ninjas is a two player combat game. What sets it apart from the usual dueling games like Magic: the Gathering and Yu-Gi-Oh is the random factor. Some of your Ninjas have a set attack or defense number, but for others you have to roll dice to find out how much damage you give or receive. Still other Ninjas can do things other than just cause damage, such as healing yourself, stealing cards from you opponent, or even resurrecting a card you have played before. There are a total of 24 ninjas on 58 cards. Six of those ninjas are unique, while others may have up to 5 copies in the deck. The remaining two cards of the 60 card deck provide basic references for the game.

The most clever thing about this game, in my opinion, is the dice. There are 4 dice in the box. Two are simple D10, used to count your life points. The other two are D6, but they are each completely unique to this game. There is the red Kunai die, that can do one of two things. It has images of one, two or three throwing daggers, for deciding damage. For either / or conditions, half the sides are printed in white, the other half black. Then there is the white Shuriken die, which can also do two things. It can count from 1 – 6, based on the number of points on the pictured throwing stars. It also has 3 colours, orange, green and purple. That’s right, you can make four different random decisions using only two dice.

I read the pamphlet that came in the box; I also watched the video on the game’s website. Unfortunately, the rules are set up so that they seem more difficult than they really are. But, in the words of one of my favourite motivational posters, “if you tell me, I’ll forget; if you show me, I might remember; if you involve me, I’ll understand.” As soon as we started playing, things became clear. Let’s start at the beginning: you need two things to have a ninja battle, a dojo (the draw pile) and an arena (the discard pile). After setting the life dice to 0 (which is actually 10), each player draws 5 cards. Decide who will be the first attacker. The rules recommend letting the younger player choose if they want to attack or defend, but you can use any method you wish. The attacker chooses one, and only one, ninja card to do as much damage as possible. The defender can also use only card to try to block some or all of the damage.

The first thing you need to know is that there are two types of attacks, red and blue. There are also three types of defensive “shields”, red, blue and yellow. Red can only defend against red; blue can only defend against blue; but yellow can defend against red and blue. Next, there multiple ways to determine how much damage you do. First, there are ninjas with a set attack number. Next, there are ninjas with a range of damage, roll the Shuriken die and do damage based on the number. Other cards tell you to roll the Kunai die, and do damage based on if you roll a 1, 2 or 3. The third randomisation involves rolling the Shuriken die for colour. Finally, you can roll the Kunai die and follow the instructions for either black or white. Some very powerful ninjas allow you to roll twice and add both numbers together. All these same options can be used to determine the strength of the defender’s shield. After the damage is resolved, the attacker can choose whether to attack again or stop. The trick is, you are only allowed to draw cards when you are the attacker. This means that every card you use as an attacker is one less ninja who can defend when your roles are reversed. Players take turns attacking and defending until someone’s health goes down to zero. My dueling partner commented “it’s like D’n’D, but just the combat scenes”.

That’s the simplest version of the game. There are also ninjas who do things other than give or receive damage. These cards can change the game completely. Some examples include the Ninja Alien, who not only blocks all damage but also “abducts” the attacking ninja card; the Ninja Robot, who can do a red attack, a blue attack, or heal his player depending on the colour rolled; the Ninja Baby, who can throw a “tantrum”’, stealing cards from the defender’s hand; and the Gambler, who forces the defender to literally bet their life (points) by guessing which colour will come up on the Shuriken die. Even one or two of these ideas would be cool, but nearly half of the 24 ninja characters have these kinds of awesome special abilities. This is the most gameplay in the least amount of space that I have ever seen.

You can find Teeny Tiny Ninjas online at teeny.tinyninjas.ca or on Facebook at facebook.com/tinyninjasgame and facebook.com/2niverse.