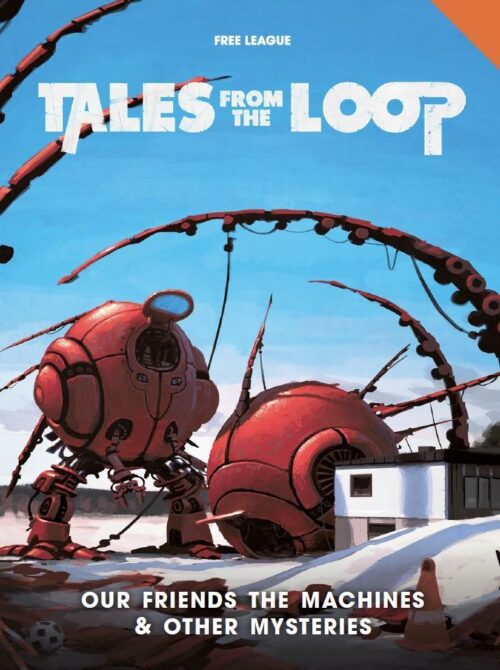 [We’ve presented several Tales from the Loop reviews lately. Our Friends The Machines & Other Mysteries is a sourcebook for the roleplaying game. If you don’t know the game, you may want to start with our review of the Core Rulebook.]

Tales from the Loop is a roleplaying game that, more than anything, is driven by story. So it makes a certain amount of sense that the first sourcebook would focus primarily on Mysteries, the adventures undertaken by Kids in the game. The three main Mysteries in the book are Our Friends the Machines, Horror Movie Mayhem, and The Mummy in the Mist.

Our Friends the Machines has players investigating strange happenings after a line of robot action figures is launched at the local toy store. The toys, a line of form-changing robots inspired by the American hits like GoBots and Transformers, have been secretly upgraded by a pair of rogue experimental Artificial Intelligence known as A and B. B programmed the peaceful robots of The Convoy to help it and A to stay hidden and coexist with humans. A, on the other hand, programmed the …less-peaceful… robots of The Deceivers to assimilate and control humanity.

The ’80s was a decade of rapid change. Many of the most iconic shows of the era didn’t have toys designed from the cartoon; toy companies, like Hasbro, created and marketed cartoons that were based on their toys. In many countries, this resulted in odd laws like requiring children’s programming to have a bumper to indicate where the show ended and the commercials began. In Sweden, and other countries, there were similar concerns, but with an extra layer, as parents pushed back against the perceived “Americanization” of their youth through toys and media. This resulted in many Swedish products “inspired” by more popular American ones. To kids, “Swedish” became synonymous with “corny” and the fictional toy line Our Friends the Machines is no different.

Horror Movie Mayhem plays into the similar, and largely adjacent, phenomenon of Moral Panic. Parents and grandparents raised on wholesome characters like Archie Andrews and Beaver Cleaver were terrified that violent movies, demonic roleplaying games, and heavy metal music would corrupt children and basically turn them (us) all into psychopathic killers. I once read a book that my mother had gotten from one of her church friends. Care Bears were satanic because talking animals and magic tummies. Ninja Turtles were satanic, and kids everywhere were going to get killed trying to get into sewers, and so on, and so on. The author was mortified when she found out the Sunday School teacher had allowed her child to watch Disney’s satanic Cinderella. Imagine a world lead by Reverand and Mrs. Lovejoy from the Simpsons.

This Mystery starts with the local Parent Teacher Association protesting and shutting down the local video rental store. Parents and other adults seem to be changing and falling in line with the PTA Chairman’s crusade. Will horror movies really destroy the world, or will they save it?

With horror movies back on the market, strange things are starting to happen on Mälarhöjden Beach in The Mummy in the Mist. (No, this Mystery isn’t explicitly connected to the previous horror movie one. But a good segway is hard to pass up.) Is security from The Loop really hunting a mummy? Why are they keeping people off the beach and away from the unseasonably still-iced over lake? What is really hiding in the strange fog that envelops the beach and lake? There’s more to this mystery than meets the eye… (Nope, not at all connected to first “Transformers” themed Mystery either. Still a good tag line though.)

As I just pointed out, these three Mysteries aren’t connected. BUT the seasonal timing of them would make it very easy to string them together. The four Mysteries in the Core Rulebook were collectively called The Four Seasons of Mad Science and took place over the course of a single in-game year. That means each Kid would age up (or even age out if they turn 16) during the continuing story. It is specifically stated that Our Friends the Machines takes place in the spring. Similarly, Horror Movie Mayhem is noted as taking place in early summer. The Mummy in the Mist is noted as taking place in March, trees haven’t started to bud but the snow has melted and the lake would normally have thawed out. It would take nearly zero effort for a GM to instead move it to late autumn, with similar conditions. Put a fourth Mystery before or after it and you would fill four seasons and each Kid would again age up or out of the game. Whether this was intentional, I couldn’t say, but it’s a loose format I’d love to see in future Mystery-based sourcebooks.

After all that fantastic strangeness, there is a chapter called Mixtape of Mysteries. The music medium of choice throughout most of the 1980s was the cassette tape. many an hour was spent waiting by the radio, trying to record “that” song for an upcoming road trip or to give to the girl of your dreams. This chapter presents eight worldwide hit songs from the ’80s, with a short summary of a Mystery that could be based on each song title. These aren’t full Mysteries like in the previous chapters, but they do give an introduction, The Truth, Hooks, and a Countdown, plus bio-blurb on the main antagonist(s). While I am a fan of a more detailed Mystery, I greatly appreciate the inclusion of this chapter, and utterly LOVE the mixtape concept. I would never want to see every future Mystery written up this vaguely, but I hope to see a Mixtape of Mysteries chapter in all their future books.

That’s the end of the Mysteries, but not the end of the book. There is also a short chapter called Machine Blueprints, which gives a good length description of two common robots and two common airships, along with some Mystery ideas around each of them. The book then closes with Hometown Hack. The Core Rulebook points out that while there are two official locations in the game, there can be a certain appeal to retconning the history of your own hometown and playing out your Mysteries there. This chapter gives some best practices for building The Loop under any town. As an example, they asked Modiphius Entertainment to come up with a British setting. Which they did using The Norfolk Broads as their location of The Loop, as run by the secret Department of Defence division ReGIS (REgional Geomagnetic Information Sciences).

As much as I loved these Mysteries, the one thing that drove me crazy is how they formatted some of the location maps (in the Core book as well). They are drawn on a standardly spaced grid, but the scale of the maps never matches up with that grid. As near as I’m able to tell, the grid is completely decorative. The narrative flow of the games make maps largely unnecessary, so either have no grid or have the scale match the grid you use. The other map issue is that in several instances the maps are labelled differently than how they are mentioned in the text. The text might read “Location 4D: The Office Floor” but the map just reads “Second Floor” with the office room labelled as “office” and no mention of “4D” anywhere. Again, not the end of the world, but it will distract some people from the more important things in the game.

Last year, Free League released the Things from the Flood, a sequel to Tales from the Loop that brings players forward into the 1990s, and the Out of Time Mystery Compendium that is apparently compatible with both eras of the game. As well there is a new boxed starter set of Tales from the Loop that is due out imminently, but since most shipping warehouses have been closed, you still have the opportunity to preorder that box! Combine that with the board game they have on Kickstarter right now, and you’ll be set with all the Tales you can handle until the next apocalypse.