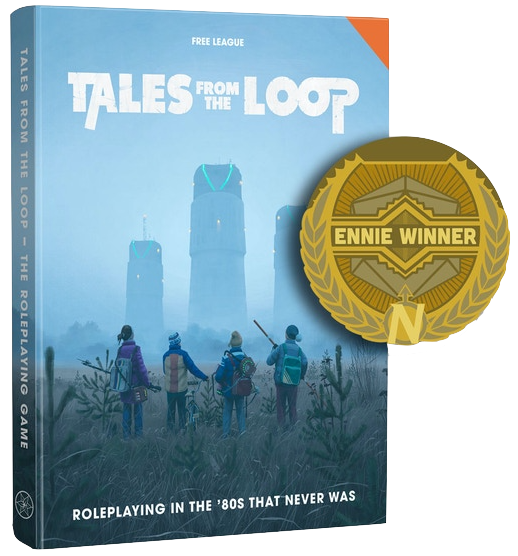 This is the first Tales from the Loop product I started, but the third review I’ve written on it this week. First I wrote a CrowdFUNding Spotlight on the upcoming board game (that funded in the blink of an eye). I followed that up with a review of Amazon Prime Video’s new 8 episode television adaptation, over at Geekorama.net.

Today I get to take us all the way back to the beginning, sort of. Not the actual beginning, but the beginning for many people and certainly for most gamers. Tales from the Loop: “Roleplaying in the ’80s that never was.”

Originally created as a personal side-project by artist Simon Stålenhag, Tales from the Loop was FIRST published as a narrative art book in 2014, followed by Things from the Flood in 2016. In 2017, Free League Publishing (who also released the art books) released Tales from the Loop as the tabletop roleplaying game we’re looking at today.

The rules are all incredibly streamlined and simple. Each player is a Kid, aged 10-15. There are eight “Types” of Kid; school-aged stereotypes that almost everyone will recognize from their own youth. Each Type lists three Key Skills and suggestions for the other aspects of the character. Once they’ve chosen their Type, and age, they distribute Attribute points equal to their age between Body, Tech, Heart, and Mind. As in real life, an older Kid has a stronger Body (for example), but that doesn’t make them automatically better than a younger Kid. The flip-side to Attributes is Luck, which can be spent to reroll an otherwise unsuccessful role. Each kid gets Luck points equal to 15 minus their age. So a 15-year-old would get 15 Attribute points but no Luck and a 10-year-old would get 10 Attribute points but 5 Luck points. The 15-year-old is more likely to succeed at the specific skills they have learned, but a 10-year-old might luck out and succeed at something they have no business being able to do. (Inexplicably, also just like real life.) As kids age, they gain one additional Attribute point and lose one Luck point. When they turn 16, they are no longer considered a “kid” in life and are no longer able to be a Kid in the game, they move on with their life, but may return as an NPC in a future Mystery.

Each Attribute has three Skills associated with it, the combined value of the Skill and the Attribute it’s derived from determines how many dice a Kid will roll to overcome Trouble. To use the same example as above, Body is connected to the Skills: Sneak, Force, and Move. If a Kid wants to punch out a bully, they roll as many dice as their values in Body and Force, with any 6s counting as a success. Players only get 10 Skill points to assign, and only the Key Skills for their Type is allowed to start above 1. The only other modifier is for a Kid’s Iconic Item. Most items are picked up during gameplay, but everyone gets one Iconic Item that speaks to their character, and that can give a 2 dice bonus when it might apply. Instead of punching a bully, the Kid decides to hit them with their omnipresent hardcover sketchbook. Now they would roll Body + Force + a 2 dice bonus from their Iconic Item (the sketchbook), but that same player would have to work hard to convince the Gamemaster that they should get the bonus while trying to push open a stuck door.

From there, most of the character creation process focuses on narrative details. But that doesn’t mean those details aren’t every bit as important. More than stat values and dice rolls, the Year One engine is fueled by story. In fact, the actions of NPCs and Antagonists aren’t determined by dice at all, the GM just decides based on what best advances the story and how well the players describe their actions. NPCs similarly don’t have a uniform set of stats the way Kids do. What they usually have is one or two narratively driven Special Attributes that increase the difficulty level to overcome them in certain situations, and might focus how the GM handles their other actions. A Canada Goose might have the Special Attribute “Fierce Bite 3” might meaning the kids need to roll three successes to attack or get past the goose without getting bitten, but when the goose attacks the kids the GM might factor in that same attribute and make the Kids roll three successes to avoid getting hurt (and let’s be honest, for a Canada Goose, attacking is definitely a when not an if).

The primary setting in Tales from the Loop is on the islands of Lake Mälaren, just outside Stockholm, Sweden. Deep under the lake is a complex that includes the world’s largest particle accelerator, known locally as “The Loop.” The scientists working at The Loop, are always conducting strange experiments into the nature of reality, a side effect of these secretive activities is often that unusual things just sort of happen in the area. (Maybe that why a Canada Goose ended up in Sweden…)This all happens in a 1980s that is just a little different than we remember. Phones still have cords, computers still use floppy disks, but robots are a common sight, as are floating Gauss freighters.

The chapter does an incredible job blending what life was like in our version of Sweden in the 1980s with the fictional events in the game’s timeline. Knowing that this game would be sold in North America, Free League also included a secondary, American, setting in Boulder City, Nevada. Throughout the book, things are written in the Swedish setting, with many things having American setting replacements noted in brackets. The most common replacements are the names of people or places, both of which often pose a pronunciation problem for native English speakers.

The last half of this book has not one, but FOUR Mysteries to play through. The first three can be played as separate one-shot games, or as a multi-game campaign, but the fourth is intended to be played specifically as the finale to the campaign. Each of the Mysteries is written in great detail, which is something I LOVE. I’ve never been shy about not having a passion for running games, and even less so for writing my own scenarios. Giving me a basic story hook, but no story, annoys me to no end. So having four well written Mysteries included is just this side of a dream come true.

Tales from the Loop is a great game. Simple rules, deep stories, and a heavy dose of nostalgia. I absolutely love it.

Don’t forget to check out our CrowdFUNding Spotlight on the Kickstarter campaign for Tales from the Loop – The Boardgame (live until May 6, 2020)