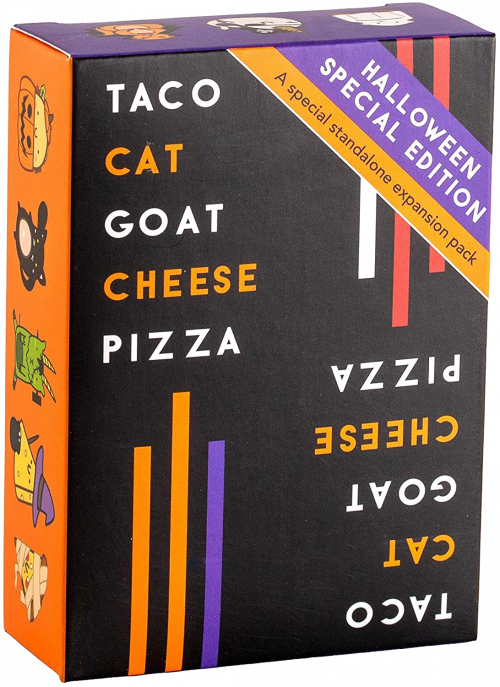 I admit that I don’t play Party Games often, mostly because even before the pandemic, I didn’t go to parties very much, and hosted them even less. That’s why, when I was told that Taco Cat Goat Cheese Pizza, by Dolphin Hat games, had a special Halloween makeover, the only thing I knew about the original game was the name. To be honest, I thought it would be something weird like Exploding Cats or Kitten in a Blender. But to my surprise, the game is both simpler and crazier than either of those.

Taco Cat Goat Cheese Pizza (which I will call TCGCP) is as simple as its name. In fact, the name is the game. The whole game consists of 64 playing cards and 2 double-sided instruction cards. Yes, that’s right, all of the instructions for the game will fit on 4 standard sized playing cards. The 64 cards are divided between the five “main characters” (Taco, Cat, Goat, Cheese, and Pizza) as well as three “special characters” (Gorilla, Groundhog and Narwhal). Gameplay is a variation of the Snap/Slap style card games, where you have to be the first person to react when a certain trigger event happens. For the majority of the game, being “first” isn’t as important as “not being last”; but in order to win the game, you must be first.

To start off, the game can be played by “between 3 players and as many as you can fit around a table” (realistically, 3 – 8). The dealer divides the entire deck equally between all players, which are kept face down and not looked at by the players. The goal of the game is to get rid of this hand of cards. Starting to the left of the dealer, and proceeding clockwise, players flip over the top card in their pile to the center of the table, while saying one of the words in the game title (Taco, then Cat, then Goat, Cheese, Pizza, etc.). This continues, in a steady rhythm, until someone happens to play a card that matches the word they said. At that point, everyone rushes to slap the pile. Whoever reacts the slowest has to take the whole pile, and add it to the bottom of their “hand”. If someone plays one of the special cards, everyone has to perform an action, and then slap the pile. When a round ends, you start over with “Taco” (a rule we didn’t notice in our first game).

When we played this game for the first time, we had two major issues. The first was simply remembering all the words. Taco and Cat go together (thanks to internet memes); Goat and Cheese go together; Cheese and Pizza goes together. But there really isn’t an automatic mental connection between the words Cat and Goat, so Goat was the word we missed the most often. The other problem was that one of our players had a hand injury, and was afraid to slap. So there were a lot of times when we had two people go for the cards, and one player did nothing. It would have been fairly easy to house rule this by slapping the table in general instead of the card. And, as I have said before with Party games, this is an experience that would probably be more fun if the players were a little bit tipsy.

So after all that, what makes this a Halloween game? Surprisingly, not much. Unlike the upcoming Christmas edition, which has completely new words/characters, this version of TCGCP is just “wearing a costume”. Almost all the changes are purely cosmetic. The characters are each wearing Halloween costumes: Taco is dressed as a Jack O’lantern, Goat is a Zombie, Pizza is a Mummy and Cheese is a Witch. Not that there’s anything wrong with that; the artwork is rather cute. At first, I thought that Cat wasn’t wearing a costume at all, until I checked the main game, and found out that the original Cat was white, and the Halloween Cat is black. I admit that, when I first heard about the “costume” idea, I hoped that they would be dressed up as each other. But I suppose that would make things a bit too confusing. The special card characters are also “in costume”. The Gorilla is now a ghost “Boo-rilla”, and you need to wave your hands and say “boo”. The groundhog is “Hogula”, the vampire, and you must cover your face with your arm and say “blah”. The Narwhal is a pirate “Arr-whal”, requiring you to cover one eye and say “arr!”. If you are the type who needs a genuinely scary game for their Halloween party, this would not be your first choice. But if you prefer Halloween more Silly than Spooky, then TCGCP is the game for you.

You can find Dolphin Hat Games online at www.dolphinhat.com or on Facebook at facebook.com/dolphinhatgames.