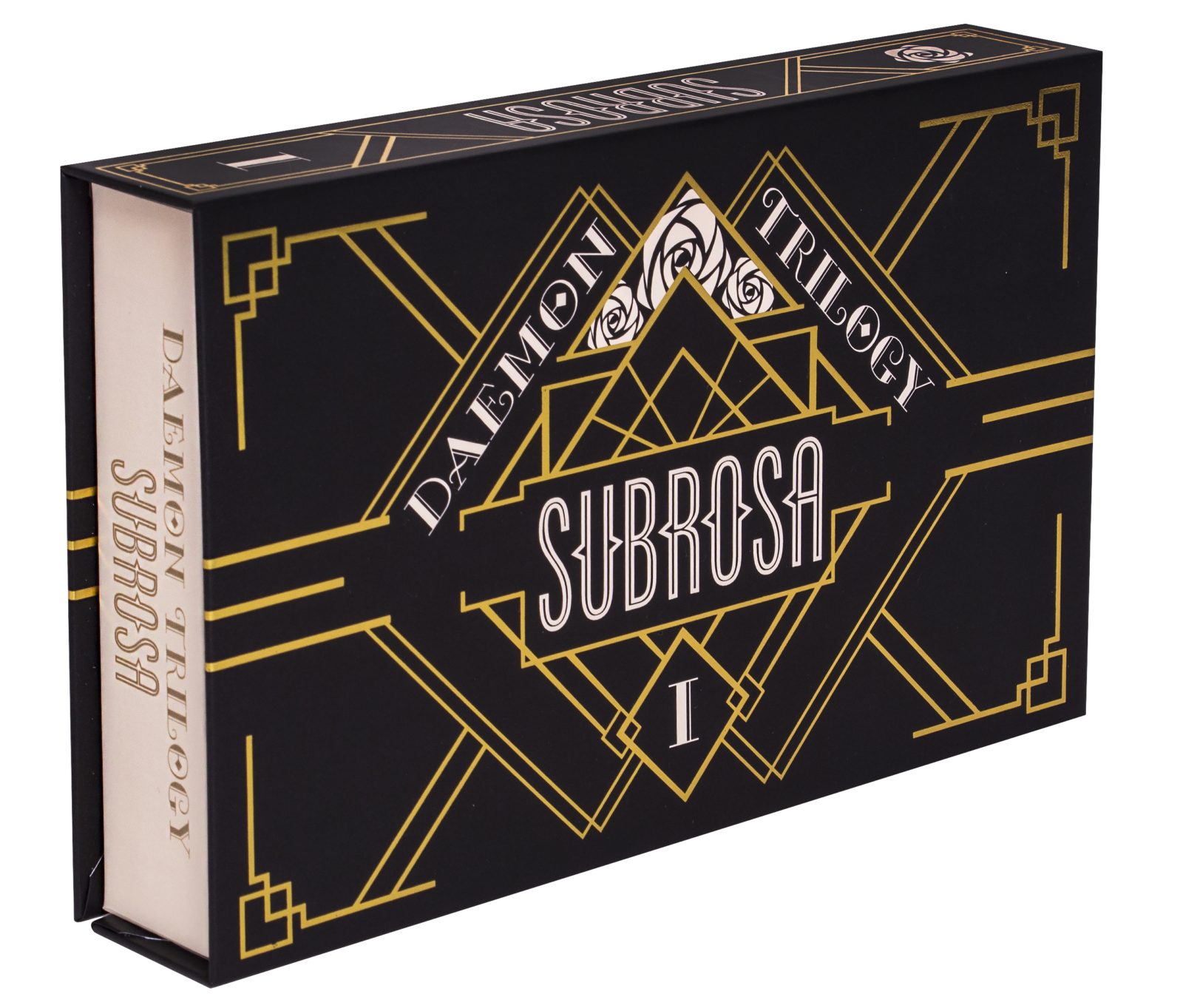 Daemon Trilogy: Subrosa is a unique card drafting game that has amazing style, but that doesn’t put that style above its substance.

The players all represent nobles hiring Crews of mercenaries to complete Contracts. To complete a given contract a player must have the correct number and types of mercenaries in their Crew. The game ends when any player has only one card left in their hand at the end of a round. Players are awarded points for each of their Contracts that they were able to complete, minus half the point value of any incomplete Contracts they may still have.

Before the game starts the dealer will build the Character Deck with the appropriate cards for the number of players in the game. This works out to 15 cards per player, and can be done with the “Recommended Character Builds” chart, or for a more chaotic game, it can be done randomly (the Deck of Intrigue variant rules). Once built, the entire deck is used, and each player starts with 15 cards in their hand. Each play also is given three Contract cards, of which they must keep at least one of, discarding the others if they wish.

Each round happens in phases, with each phase being completed simultaneously, and any effects being resolved in order starting with the player that holds the (beautiful) Initiative Token.

In the Recruitment Phase, each player Recruits two Characters from their hand, playing them facedown in front of them.

In the Action Phase, each player chooses a single Character in play (face up or face down) whose ability they wish to activate. Alternately they may draw two Contracts, and discard one Contract (even one they previously had).

The Resolution Phase is done in turn order starting with the player holding the Initiative Token. The player simply activates their chosen Character’s ability. A common ability that many Characters have is to Wound another Character in play. If a Character is Wounded, or otherwise removed from play, during a turn they would have been activated they still have the opportunity to take their action before being discarded into the Wounded pile. The Wounded pile is one of the more unique aspects of the game. As an extension of the drafting mechanics in the game, when any players character is removed from play, they go into a communal pile, allowing a player to potentially wound their opponent’s character, and retrieve them from the Wounded pile as their Character action on the next round.

Once all players have resolved their actions, the Scoring Phase happens and anyone wishing to reveal and complete a Contract may do so. The Contract, and Crew used to complete it, are all set aside. This means that while the Contract is the only thing that counts for points at the end, the Characters in the Crew that completed it are permanently out of the game.

Finally, all players pass their hand of cards, along with the Initiative Token, are passed to the player on their left. The game ends if the round finishes with any player having only one card in their hand.

Several players compared Subrosa to Ticket to Ride, but without a board, and that’s not an unfair comparison in several ways. The variable set collection and penalties for an incomplete goal, are certainly not exclusive to Ticket to Ride, but the fact that it quickly drew those comparisons should be taken as high praise. There is a great deal more to Subrosa, yet it still feels simple and streamlined.

The rulebook includes a number of variant rules, and there is a companion app that enhances the secrecy of the game. When the app is used players don’t need to reveal their Characters when taking actions, they tell the app what they are doing and the app gives the results. This suddenly makes cards that force a Character to be revealed much more powerful.

There are some great worldbuilding snippets of fiction throughout the rules, and Subrosa was (and hopefully still is) intended to be the first of a trilogy of games. I have yet to see a part two happen yet, but I very much hope it happens. There was honestly very little I didn’t like about Subrosa, and many of those things would be settled with the additional context that would hopefully come with more games in this universe.