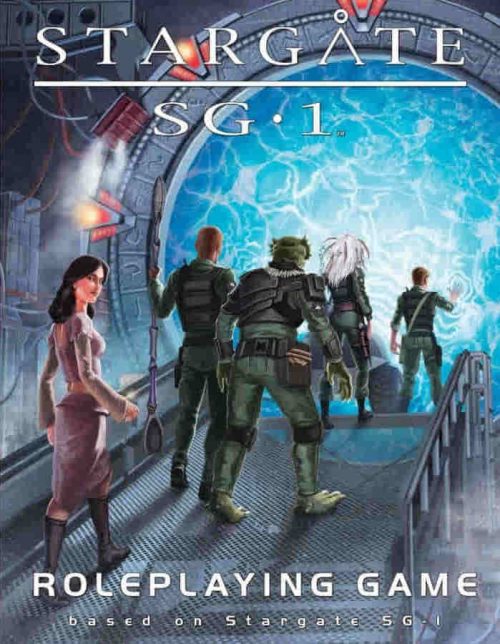 It’s no big secret I don’t generally review Dungeons & Dragons. Occasionally I’ll do a CrowdFUNding Spotlight on a 5E compatible third party product, but anything more than that is VERY rare. The Stargate SG-1 RPG Core Rulebook is one of those very rare occasions. Wyvern Gaming didn’t just McGyver something together using Dungeons & Dragons and some Richard Dean Anderson footage. They took the 5E system, and rebuilt it from the ground up. This game, I was pleased to learn, isn’t a D&D game, but rather it utilizes the 5E system at its core. I honestly don’t have an issue with the 5E system itself, so I was excited to pick up a game about one of my all-time favourite Intellectual Properties.

Calling this game “SG-1” is really just a licensing and branding thing. The game takes place in and around Season 6 (of 10) of the Stargate SG-1 television series, but you don’t actually play as the SG-1 team or even another member of the main SG-teams. The players are all part of the top secret Stargate Phoenix Site. This off-world site is virtually unknown to all but a few outside personnel in the SGC. As the teams from Stargate Command encountered more and more alien worlds, it became apparent that there was a need for a base separate from the bulk of Earth politics. A site that allowed for the recruiting and training of alien personnel without interference from the more xenophobic elements within the government and military.

Moving past just the theme, let’s talk a bit about the rules running it. Because of its age and ubiquitousness, a vast majority of tabletop roleplaying games can trace their roots back to Dungeons & Dragons in some way or another. So while I don’t play Fifth Edition, it remains very familiar feeling to myself and many other players. Since this particular game is built from those rules, it too feels pleasantly familiar. There is a brief sidebar covering some of the core changes from most 5E derived games, but beyond that I don’t know what mechanics are and are not new. So, please excuse me if I present anything as if it was new to me. It’s been so long since I’ve played anything D&D, that it basically is new to me again.

-Only having five class levels, after which players purchase individual feats for the advancement of their character as an individual.

-Use of the metric system, using one meter increments rather than five feet.

-Most combat uses firearms or other ranged weapons. This can make standard grid-maps unwieldy at best. Melee combat can happen, but if you’ve ever watched the show you’ll understand how little that comes up.

-a “Tension Die” is used to note the tone of a given episode (adventure) and is sometimes used as a base for certain things. At most Tension ratings, encounters are rarely lethal in the same way that main characters rarely die on television.

-There are multiple encounter types besides simply traditional action. Some of these allow players to wager Determination Points. Some of these use Moxie (INT or CHA) instead of traditional initiative (which is expanded to use either DEX or WIS).

-Instead of the usual experience point (XP) system, players are awarded mission points (MP) at the end of an adventure, however, they function in much the same way.

A smaller change (at least from the player’s viewpoint) is how adventures are structured. Like many games inspired by television programs, an individual adventure is referred to as an “episode”, a 13 episode story arc is referred to as a “season”, with a multi-season campaign being called a “series”. A note labelled appropriately as SPOILER WARNER points out that gameplay is intended to take place parallel to Season 6 of the show, but that the rulebook is written as if that same season is complete. This was evidently done to ensure the easiest possible release of future supplements and it makes me ridiculously happy to see that more supplements are planned.

Again, I have nothing to reference against to compare the character creation process, but several of the differences are obvious. Race, Origin, and Class are the most obvious. Most of the available races are to be expected. Humans, Jaffa, and Tok’ra all feature heavily on Phoenix teams. If you have watched anything of the Stargate universe (in general, not specifically the Stargate: Universe series) you know that humans were spread to many other planets millennia ago by the Goa’uld. These humans are biologically the same as us “Tau’ri” here on earth, but their cultures evolved independently of earth and each other. Several planets are mentioned, with the populations of Abydos and Tollana given additional traits. A surprising option is the Unas, a reptilian race that evolved on the same planet as the Goa’uld and served as their first hosts. A best I can determine there is a great deal of history between Unas tribes and Phoenix Site, that is only briefly touched on. A history that is just begging to be expanded on. The final player race is the Aturan, a race newly created for this game. Most Aturan recruits ascribe to a similar philosophy of extreme non-violence as the Nox, with whom they share a close cultural association. So it’s a good thing that Phoenix Teams are not strictly combat units.

The next step in character creation is to select a character’s Origin, or Origins to be precise. The player gets to choose two origins from two different categories out of a possible three: Biome Origins (environments or locations), Background Origins (lifestyles or occupations), or Racial Origins (specific in-game lore available only to characters of a relevant race). The choices made here help frame a character’s backstory while giving the player (and GateMaster) ample room to develop more personal details during the course of their series.

In many other games, a character’s Class is one of the most important factors in determining who that character will be and how they will develop over time. But Phoenix Site only wants to ensure their often non-military recruits have a consistent base of knowledge and training. Once a character reaches Level 5 their advancement stops following a ridged path as the player begins to choose from the full pool of abilities, not simply those of their chosen class.

Similarly, a character is not locked into a specifically limited selection of weapons and equipment. Remember, the players are not hapless adventures in a pub but members of a large military organization with an armoury stocked full of a near-limitless selection of weaponry. The characters usually have the time to prep for a mission and requisition the appropriate gear from General Loyer. (Commander of Phoenix Site, loving named in memory of Phillip Loyer, to whom the book is dedicated.)

One thing that hasn’t changed is how a character records and uses their basic ability stats. Strength (STR), Dexterity (DEX), Constitution (CON), Intelligence (INT), Wisdom (WIS), and Charisma (CHA) all work more-or-less the same as they do in regular Dungeons & Dragons (and a lot of other systems, really). The higher the stat, the higher the modifier on any checks made against that Ability. If you have a terrible enough stat, you may even have a negative modifier making your checks harder.

Overall this is going to be a great game, but the book does still have some failings. During the preliminary “Basic Training” section, for example, they mention that the numerous references to specific episodes of the television series are labelled with the Episode Title along with the Season and Episode number, but that are only labelled with the Title and Season; no Episode numbers. I know that’s a minor thing, but as someone who enjoys bingeing “research materials” for a game like this, it’s a minor thing I notice. Another frustrating thing is the lack of a physical character sheet. Apparently, an early crowdfunding-backer version of the PDF indicated one would be included, but somewhere in the process it was removed and replaced explicitly with a downloadable blank sheet. (As well as a handful of pregenerated “iconic” characters referred to as examples throughout the book.) Just to be clear, I LOVE having downloadable content for things like character sheets. But I’ve also seen too many games rendered unplayable thanks to critical resources only being available on a defunct website or in an obsolete format. A tabletop roleplaying game should NEVER not have something this important not included. It took a VERY long time before I was able to find the notation with the URL; although I do have to admit a small amount of user error, as I managed to overlook the Character Sheet entry in the index.

As I mentioned above, Wyvern Gaming apparently has more products planned for the Stargate SG-1 Roleplaying Game and I’m super excited to see how the game grows and expands. Yes yes yes, yes, yes yes yes. Oh, and also: YES! I honestly never thought I’d be this excited for any 5E powered game, but here we are. All chevrons are locked and the Stargate is open, let see where it takes us.

You can find the Stargate SG-1 Roleplaying Game and Wyvern Gaming online at wyverngaming.com or on Facebook at facebook.com/WyvernGaming.TableTop.