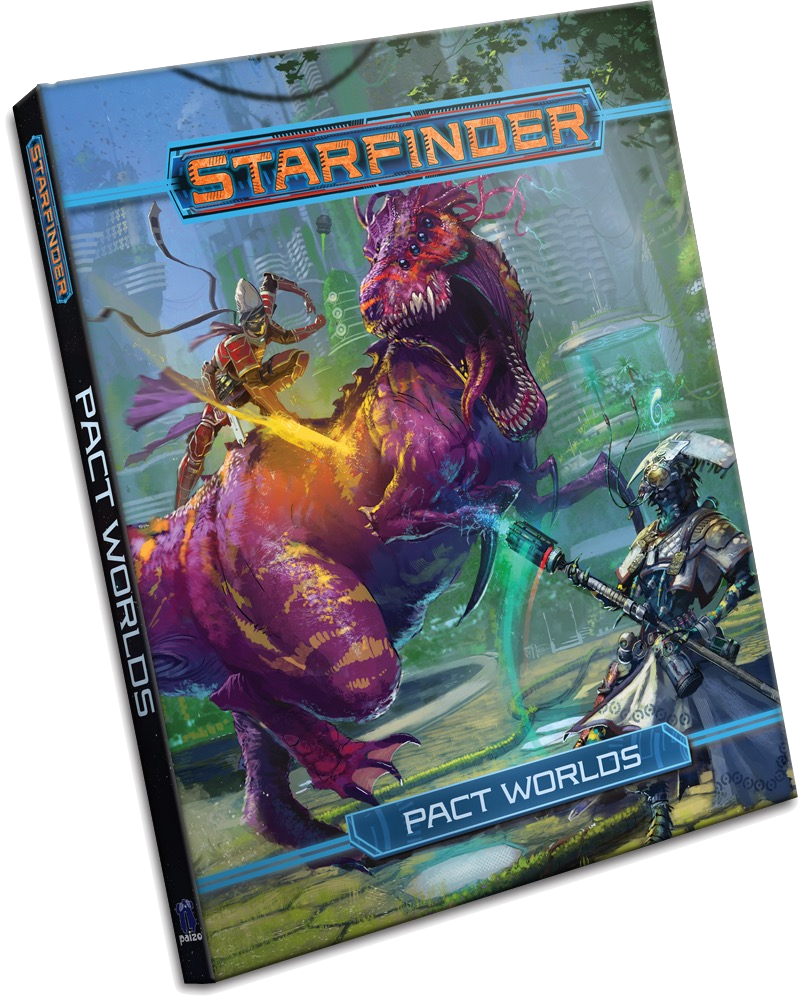 There is a huge universe out there, just waiting to be explored. But just as in childhood, you need to crawl before you walk and walk before you run. So before reaching out to find new stars, let’s start with finding out more about the worlds that make up what once was known as the Golarion System. Let’s look at Paizo’s second major sourcebook for the Starfinder Roleplaying Game, Pact Worlds.

One thing that Paizo has always done extremely well is not just walking their players by the nose through an adventure, but also giving them the tools to explore and create their own adventures and stories. With each entry in the Dead Suns Adventure Path, they have not only given the details of that specific adventure, but also a look at the planets and creatures that make up the Starfinder universe. They built on that with the Alien Archives sourcebook earlier this year, and continue it with Pact Worlds sourcebook.

Pact Worlds is a 215-page overview of nearly everything we currently know about the Pact Worlds System that is the central point of the Starfinder RPG. Chapter 12 of the Core Rulebook gives a great introduction the Pact Worlds, with a timeline of some of the major historical events, and a two-page entry of each of the major planets. Just to be clear, whenever I refer to “planets” in the context of the Pact World System, that also includes the inhabited areas of their Sun, Absalom Station, and the massive asteroid belt known as The Diaspora. This book covers some of that same infomation, but, obviously, covers a great deal more as well.

The sourcebook is broken down into four simple chapters, prefaced with a quick four-page overview of the system as a whole that covers the details of things that don’t necessarily belong in the entry for any single planet.

The first chapter, The Worlds, covers about two-thirds of the total book. This chapter covers each planet in greater detail than previous entries in the Core Rulebook, and in differing detail to entries in the published Adventure Paths so far. Each planet has a 10-page entry, with a brief introduction followed by sections on Geography, Residents, Society, Conflicts/Threats, and Notable Locations. Most of the locations are just a written description of that area, but some of the more important locations also have a standardized stats block, as you might see in an adventure. Prominent figures in some areas are mentioned since they would be obvious NPCs in an adventure at that location. They are not, however, given any sort of stats information beyond the standard description given for the introduction of any NPC: Full Name (Alignment, Gender, Race, Class). Each planet section is capped off with a new Character Theme that relates to that specific world. Some themes, like the Space Pirate, are so prominent that they show up again as antagonists in the Supporting Cast chapter a bit later. Others, like Gladiator and Dragonblood, are less likely to show up regularly but could be a ton of fun to play.

The second chapter is Starships. It starts with a basic introduction to The Drift and Drift Travel. It reiterates a little bit of the backstory, but focuses mostly on The Drift as a plane of existence, rather than the rules around it (which, along with building your own starship, is covered in detail in Chapter 9 of the Core Rulebook). Most of this chapter in Pact Worlds is dedicated to a sampling of different ships from some of the organizations not covered in detail in the other Starfinder releases, so far. This chapter is admittedly, and specifically, not an all-inclusive list of the ships used by these organizations. Rather it gives three examples for each group that is typical of them. It also gives a handful of new rules for technologies that weren’t included in the Core Rulebook, further expanding player’s options if they are building their own vessels. Personally, I’m really looking forward to seeing more of the Xenowardens and their plant-based ships.

The Supporting Cast chapter builds on the NPC (NonPlayer Character) creation rules laid out in the Alien Archive sourcebook, focusing on some key groups and factions commonly found around the Pact Worlds System. It also includes additional rules for adding archetypes and multi-classing the NPCs you may create. Some of the included factions are specific organizations, while others are generic groups like cults and street gangs, but each of the entries includes a two-page spread with an introduction, advice on ways to adapt that particular group to similar functions, and three sets of stats in varying Challenge Ratings (CR).

The final chapter on Player Options gives a handful of new Archetypes that can be used to further refine a character that you want to create for an adventure. It also presents new Feats, Spells, Weapons, Armour, Magical/Technological Items, and a handful of new Races that players can all choose.

The Pact Worlds sourcebook is a wealth of information, but it is not comprehensive. There is information on some of the planets in the different Adventure Path publications, that is not in this sourcebook, but there is also information in Pact Worlds that isn’t in the APs. It should also be pointed out that the information presented in both places follow different formats, and have two different intentions. As well, the first AP, Dead Suns, is only six parts, and there are 14 planets in the Pact Worlds system. So in the interest of minimizing duplication and keeping a standard entry length between those planets that have been featured elsewhere, those that haven’t, and those that might be later, it’s probably not a disaster to have a small amount of information missing here. In fact, most readers might never have noticed had I not just pointed it out.

Overall this book does its job and gives a great tour of the Pact Worlds to both players and GMs alike. The art and graphic design are every bit as tight as you would expect from Paizo. The passages that are carbon copies from previous publications are surrounded by enough unique information that they feel less like a cut-and-paste job and more like a knowledgeable sound bite. Those parts are also only passages within some of the entries, not complete entries themselves, so it’s, again, possible that a lot of people will never even notice the duplication.

Many sourcebooks for “campaign settings” like this one are editions that are often overlooked by players and even some GMs. But at the same time, some of the worldbuilding information is actually a fascinating read. There’s also enough functional information, from a specifically player viewpoint, to make this a valuable book for anyone to include in their RPG library.