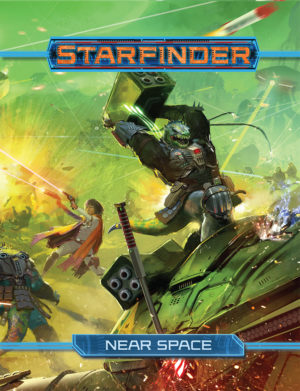 Sometimes, when the apocalypse happens, you need to just make do. Sometimes that means forever going without Twinkies, and sometimes that means having to get a PDF copy of a book because that’s the only thing available. For the record, I physically cross-referenced seven books for my most recent Pathfinder review, and five for this one (there’s a sixth I don’t have). There are people who LOVE the digital format, I’m just not one of them. It doesn’t work for most of my process.

Ok, rant over, moving on. Near Space is the second Gazetteer sourcebook for Starfinder, along with Pact Worlds. It covers 20 worlds, 12 new starships along with a slew of options player can integrate into their own ships, plus more new player options then you can shake a Skitterstaff at!

The first section of the book (and the inside cover art) covers the interplanetary empire know as the Veskarium. This the home system of (you guessed it) The Vesk. These 7′ tall warm-blooded reptiles are battle-hungry conquerors who first took control of there homeworld, by eradicating the other sapient species there, and then systematically expanding to each planet of there system. Eventually, they built the massive space station and shipyard known as the Conqueror’s Forge. The coalition of the Pact Worlds in the Absalon system was formed to defend against the Vesk until the coming Swarm War forced the two systems to cooperate in what continues in a precarious era of peace. The Vesk are one of the original playable species in Starfinder. As both a people and an empire they are a major factor in many adventures. Before this, I wouldn’t have been surprised to see The Veskarium show up as its own Sourcebook.

The second section covers Exploring Near Space. Near Space is a somewhat broad term that relates more to a planet’s proximity to a Drift Beacon than to other Near Space planets. Planets that aren’t accessible by known Drift Beacon are referred to as The Vast, which I imagine will be the next gazetteer sourcebook sometime in the future.

There are another 20 new planets to explore in this section that, when combined with the Deck of Many Worlds is certain to keep adventures flowing for some time. The planets are of every manner you can imagine, and some of the “Notable Locations” are adventuring gold. Koboden Arena on the largely Hobgoblin controlled Gideron Prime is full of potential for gladiator stories, or even a place to adapt Pathfinder’s new performance rules from Extinction Curse.

The brief Starships section brings a host of new customization options for players as well as a look at prebuilt ship examples from the Gideron Authority, Szandite Collective, and of the Veskarium. That is followed by the Player Options section.

Player Options include alternate racial traits that give more depth to some of the playable creatures previously presented. There are new Themes that might be common in Near Space, like the Prisoner which is an obvious choice for the prison planet Daegox 4. There are also new Archetypes, Weapons, Spells, and other such sundries.

Let me be clear before I say this next thing. I love the new alternate racial traits. I didn’t love how they were presented. One thing that Starfinder, and Pathfinder before it, have always excelled at is consistency. Specifically, consistency in how things are notated to refer players back to whatever previous book(s) more details can be found. For some reason, that consistency went out the window this time. These are ALTERNATE racial traits for EXISTING creatures that I’d like to be able to look up. The entry for Skittermanders has a reference in the first section including the book and page number. Osharus mentions the book, but no page number, in the second section. Others, like the Embri, have no reference at all. (for the record it’s Alien Archive 2 48.) I mentioned at the start I crossreference my books all the time, so maybe that’s a bigger annoyance for me than for other people. If a player really wants to play a Damai, they likely have a good idea of where to look.

All told though, Near Space is another amazing look at the expanding world universe of Starfinder and I loved it.

Whether you’ve played Starfinder or not, if you want to try it out, the annual Paizocon has moved online this year and is happening May 26-31!

For more information about Paizo and Starfinder you can find them online at paizo.com or on Facebook at facebook.com/paizo.