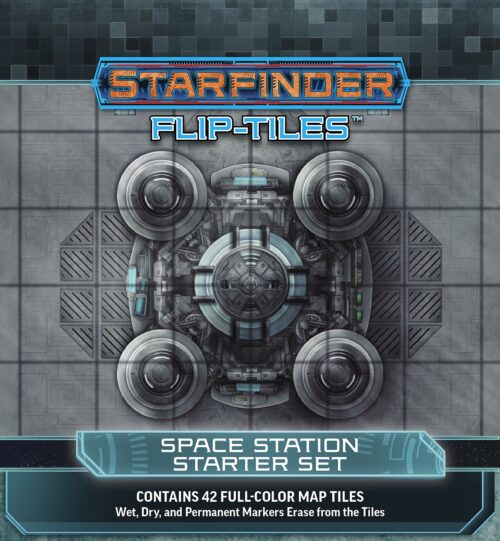 Welcome to another Accessories And… review. Today we are looking at the Space Station Start Set of Flip-Tiles for Starfinder.

One of the longest and most challenging part of prepping an adventure for many GMs is putting together the map. Paizo hasn’t “solved” that issue, but they have definitely taken a big chunk out of the work with these flip tiles. The box contains 42 double-sided 6-inch by 6-inch tiles, each one individually labelled with the tile-set, number, and side. As well, there are six tabbed dividers to help keep things organized.

Something like this is, or can be, a challenging product to make. The line between having a tile be too specific and not specific enough is a fine one. The balance between a tile that is thin enough to easily store or transport and a tile that is to thin to stay in place is also a fine one. I use those two specific examples because of how successfully these tiles did or didn’t ride that fine line.

I won’t say Paizo “failed” at balancing the weight of these tiles. It’s also not the first or last set of tiles they’ve made, so the likelihood of this ever changing is highly unlikely. But I did find the tiles were somewhat hard to keep lined up and were easily knocked askew. A few tiles also didn’t lay completely flat, making this even worse. This isn’t a problem unique to this line of tiles, it’s a common occurrence with most games that use cards or thin tiles, so while it’s worth mentioning it’s far from a dealbreaker. It’s also a problem that an industrious GM could solve in any number of ways.

On the other hand, they brilliantly succeed in the functionality of the artwork. A medical bay is clearly recognizable as a med-bay, but could just as easily be seen as part of a communal living area. A tile with a wall of workstations could be a command centre or part of that same living area. What looks like elevators could also look like holding cells and what looks to be airlocks could be believable as elevators.

They also claim that you can erase wet, dry, and permanent markers will all erase from the tiles. That claim is easily tested. Dry Erase markers came off as easily as you would expect them too. Check. I haven’t had need of Wet Erase markers in just long enough that I didn’t have any on-hand. But I rare to find a surface that a dry erase works on that a decent quality wet erase doesn’t, so I’ll say check. Permininant marker is the real challenge. I tried both an ultra-fine tip black sharpie and a standard tip gold sharpie. Neither came off on their own, this is unsurprising, but if you trace over the permanent marker with a dry erase marker, it comes off like a dream. I had to trace and wipe down the thicker gold sharpie twice, but it came off fine otherwise. I didn’t try leaving marker on the tiles for an extended amount of time, so I can’t comment on the ease of removal there.

There was a Space Station Emergency Expansion recently released to compliment this set, as well as sets for Cities and Alien Planets either out or coming out soon. If you want to add some bling to your Starfinder maps, or just a few shortcuts for them, these tiles may well be what you are looking for.

You can find more Starfinder products, and all things Paizo, online at paizo.com or on Facebook at facebook.com/paizo.