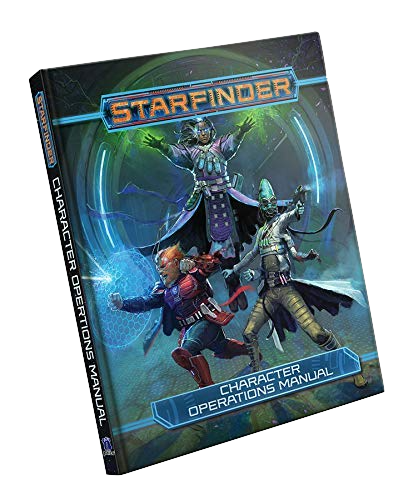 I often say that the Alien Archives (and comparable books for other games) are the most important books in a game system. While I still believe that, for Starfinder PLAYERS, the Character Operations Manual comes in a very close second. Why is that? Because this sourcebook is entirely about character creation and isn’t just a bunch of lists and tables. It’s organized very similarly to the Core Rulebook, making it very easy to reference as you walk through the process.

The first chapter, Theme and Race, combines sections from Chapters 2 and 3 of the Core. This makes a certain amount of sense since Theme isn’t its own chapter there, and combines with your Race to determine a character’s starting stats. It also links to the character’s Class to pull the character more into focus – more on that in a moment. There aren’t any new races presented here, what we get is alternate racial traits and ability options for all 13 races in the Core book. The seven core races that were new (at the time) to Starfinder each get a two-page layout, whereas the “legacy races” drawn from Pathfinder each only receive a single page.

The second chapter is the important one, focusing on 10 new character classes. Each class has 8-10 pages of detail on what that particular class brings to the gaming table. Many of them also have examples of how that class interacts with the character’s theme from earlier. For example, a Witchfinder built with the Nobel Scion theme from this book, called an Agent of Chaos, has access to very different spells, feats, and skills than a War Caster that uses the Core book’s Mercenary theme instead.

Complimenting these classes, without ostracising the previous classes, Chapter 3 is all about new feats, with Chapter 4 covering new equipment. In the overview of these chapters Piazo brings up the new equipment options to have a shield, and the associated Shield Proficiency feat. And my brain has gone off on a character concept that nostalgically started here and wandered through comicbook history off into the Marvel Cinematic Universe. Hear me out, Vance Astro / Major Victory from Jim Valentino’s run with the original Guardians of the Galaxy:
Race: Human (stuck in the far future)
Theme: Guard
Class: Vanguard – Armor and weapon proficiencies, including the new shield proficiency, fit his background. The Entropic Stike is a good stand-in for his psychokinetic blasts, and his skill progression is also oddly close. Lastly, (20-something year old spoiler here) he ends up carrying and using Captain America’s shield.

That’s not even looking outside the Character Operations Manual for details.

Back to the book. Until now, there have been two spellcasting classes in Starfinder: mystics and technomancers. As their names suggest, the two are thematically very different. With the addition of the Witchwarper class, Paizo has released a whole new set of spells to keep the now three classes distinct. The spell list for witchwarpers includes not only new spells, which are also covered in full detail, but also spells included in previous books that have been noted as such. Mystics and Technomancers also get a new listing of spells, that only includes those detailed in the Character Operations Manual.

The final chapter in the book is “Other Rules” which expands on two main parts of the original rules. The first part covers Starship Combat. More specifically, it provides two new starship combat roles that players may choose to take on. The chief mate is that crew member that makes metaphorical magic to assist the rest of the crew. Tweaking sensors for the pilot, manually bypassing safety systems to help the engineer, or reversing the polarity of the neutron flow for the Doctor. These are the sorts of actions the chief mate can take (using an Athletics or Agility check), usually in the same phase as the player they’re assisting. The magic officer, on the other hand, makes literal magic with a Mysticism check during the Engineering phase of starship combat, with the results affecting other phases. There are also new “open crew actions” and new minor crew actions that any position can use.

The second part of the chapter introduces the concept of specific downtime. Downtime is something that wasn’t specific in the Core Rulebook. There were and are a ton of downtime activities in that book, but this section expands and manages those activities in a manner more akin to the downtime phase in Pathfinder Second Edition.

The Character Operations Manual is a must-have for the potential GM whose players are fond of pushing boundaries with their characters, always looking for something new and better. Likewise, it’s a must-have for those players, so they can push things. As with every Starfinder book it is well laid out with gorgeous art, appropriate references to further information, and all the information you could need, formatted without being overwhelming.

You can find Starfinder, and all things Paizo, online at paizo.com or on Facebook at facebook.com/paizo.