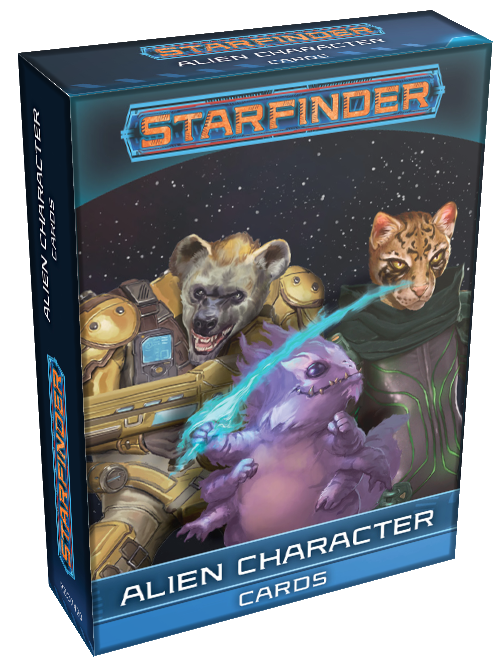 We are back with another Accessories And… feature. Today we are looking at the Alien Character Deck for Paizo’s epic spacefaring RPG, Starfinder.

As a player, sometimes you just want to try something different. When the game encompasses it, that something often starts with a new species of character that you’ve never tried before. But a game like Starfinder has very specifically grown to include a constant stream of new playable races. Not EVERY alien race is playable as a character, but Paizo made sure that a good chunk of them include the additional racial traits that players need but NPC’s don’t.

The Alien Character Deck includes 55 Aliens that are playable as characters. It includes the initial seven races from the Core Rulebook, seventeen from Alien Archive 1, ten from AA2, 5 from AA3, six from Pact Worlds, and only one from AA4. There are also five races making their first appearance with this deck. It’s important to remember that these cards do not, nor are they intended to, have a detailed description of these races. One side shows a portrait, the other only has the bare minimum information need for a Player Character. Each card (minus the five new ones) is well labelled with the book and page number to be able to find them in more detail.

The five new races Gnolls, who many players may know from Pathfinder and other fantasy games; the Grippli, a treefrog-like race that is new to the universe abroad; Kitsune, modelled after the traditional shapeshifting trickster spirits; Kobolds, who have been getting a fun push in Pathfinder; and the Samsaran.

The Samsaran are an interesting race. When they die, they are reincarnated in a new life. The name comes from the word Samsara, the term for the cycle of life, death, and rebirth in Buddhism and other Indian religions.

As a player, these cards are great. As a Gamemaster, they are no less valuable. Need a fast way to populate a bar or market with simple background characters? Just draw a few cards, with the added bonus of being able to have a quick visual aid to show the other players.

Coming from those generations before this sort of resource was common for games, I love having these for so many reasons. They aren’t necessary. They may not even be useful for a lot of people. But the people who might benefit from them, are likely to love these cards. There are even enough playable races not included here to give a good start on the next deck, so we can look forward to that down the road.