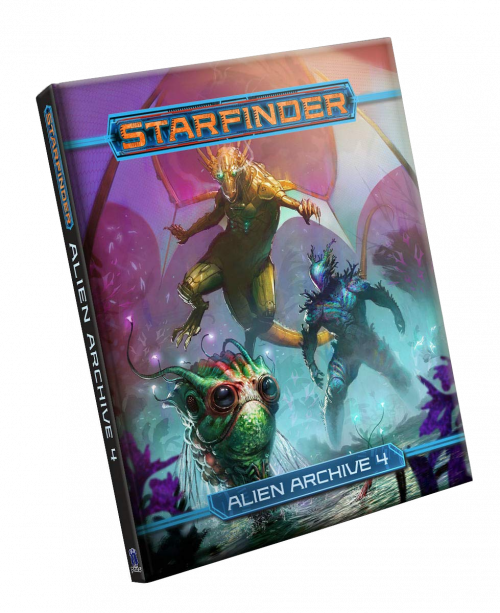 As I write this, it’s technically spring here. (To be more honest, it’s probably just a short reprieve from winter. Last snow of the year is usually the May long weekend.) But whether it spring or a false spring, I can’t help wondering if it subconsciously coloured some of what stuck in my brain about Alien Archive 4. I can’t get past the plants. But for the sake of this review, I need to get past the plants.

When it comes to sourcebooks, there’s little doubt that one of Paizo’s strengths is functionality. AA4 starts with a Table of Contents (something you would never think about until you come across a sourcebook without one) and a typical Overview of the book is and how it’s laid out. The book closes with a series of super-useful Appendixes covering some super-useful information:

Grafts: Grafts are a fast and simple way for a GM to adjust a creature in their game. These grafts break down to Creature Subtype Grafts, Class Grafts (specifically focussing on the new classes introduced in the Character Operations Manual), Template Grafts, and Species Grafts. The Species Grafts is not actually an appendix, but rather its own full section right before the appendixes since it’s an entirely new option.

Universal Creature Rules: Unsurprisingly, these are rules that can apply to any creature regardless of their species, planet, or whatever. Fast Healing functions the same no matter what creature has it.

Creatures: I can’t stress how important this set of Appendixes are. They sort every creature in the book by their Challenge Rating and Type. The entries are extraordinarily compact, with the appropriate creatures smooshed together like a sentence more than like a list. While I don’t love the visual of that format, the book is otherwise laid out alphabetically and has a table of contents you can reference.

Rules Options: This one IS laid out as a list with page numbers for each entry. Since these new tricks, weapons, spells, etc, are part of the entry of a given creature its the only way to find them as a separate thing.

Playable Races: Starfinder has always been about being able to play strange and unusual non-humans, creatures well suited for use as a Player Character usually include the extra stats for doing that.

Why am I suddenly enamoured by these bits of publishing minutiae? I recently went through a similar book (which I won’t call out here) that did NOT include any of these details. Nope, not even a table of contents. I understand why they made that choice, but wowzers did it ever give me a greater appreciation of the impact these things have on the usability of a sourcebook, and just how well Paizo does it.

Plants. I said I’d get past the plants, not that I wouldn’t circle back around to them. There are a huge number of cool creatures in this book, obviously. Robot dragons, living elemental starships, and a host of other unimaginable things. But what stuck in my brain were the plants. The lumocantha, that shoots biological lasers. The lizard-like succulents, supenga. The pharmacological wonders derived from the carnivous harpy jasmine. Gargantuan space-plants officially called greater ring roots, but more commonly known as shipkiller bulbs. I want to plant a garden now. A giant, deadly, garden in space. Maybe on and in an earth elemental starship. It’s not like there aren’t other plants in other Starfinder books. I could do it. This may be a terrible, horrible, plan. But I could do it…

There are definitely people who will disagree with this, and it would be a perfectly reasonable statement to disagree with, But I feel that Starfinder continues to be one of the best science fiction TTRPGs on the market today, and probably one of my favourite “big box” games out there of any genre.