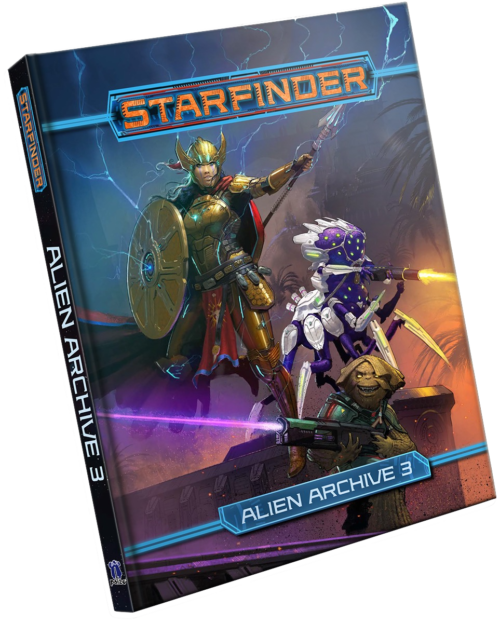 I recently got back into the office after a long convention out of province, and what was sitting on my desk? Alien Archive 3, that’s what.

I haven’t had a chance to play around in the Starfinder Adventure Paths in a while, and other than the Beginner Box there hasn’t been a ton of other new Starfinder for a while, so I was thrilled. I was even more excited because it is another Alien Archive. I think this sentence from my look at the first Alien Archive sums up my overarching opinion well: “Whether they call it a “Creature Codex”, a “Bestiary”, or my personal favourite “Even More Things To Kill and Eat”, just the smallest a glance at the pages of these tomes will give new players an idea about where that particular game could take them.”

I still stand by that thought, and it still holds true with this book. As I flip through its pages stories start flaring through my brain. Let me be clear, I’m a terrible GM but my brain comes up with some great storylines.

OK, that’s all I’ve got, but still a decent outline for a multi-part campaign, and it came mostly from AA3 (yes, even the weaponized toys). If you are coming up with a Starfinder adventure, there are no books better for inspiration than the Alien Archives.

There were a number of noticeable, but largely insignificant, layout changes between Alien Archive 1 and 2, but I was happy to find that 3 was much more consistent with 2 (although I still prefer the original sidebar setup, I enjoy consistency more). Beyond the great collection of mostly new monsters, AA3 also as a decently sized section that brings in a staple of roleplaying, Creature Companions.

The Appendixes are basically what you’d expect, with various sortings of the creatures in the book. Creatures by Terrain, Creatures by Type, Creatures by CR (Challenge Rating), and one more notable list. The Creatures by Pact World list sorts not only the creatures in this book but also those from the previous Alien Archives and the Pact World sourcebook, sorting them by (shockingly) the Pact World they are most likely to appear on. Of all the sorted lists, this one is the most detailed, noting the volume and page the creature appears on. The other lists feel very cramped by comparison, almost unusably so. I do understand Paizo has set a specific page count for these books, but I’d love to see a web-based version of all of these lists, notated in this amount of detail, and expanded to include creatures (and planets) that are presented in the Adventure Paths after each of those campaigns come to an end (to prevent spoilers).

As always, Alien Archive 3 stands up as a must have, even if you don’t play Starfinder. If you have ever played a spacefaring RPGs this is worth picking up.