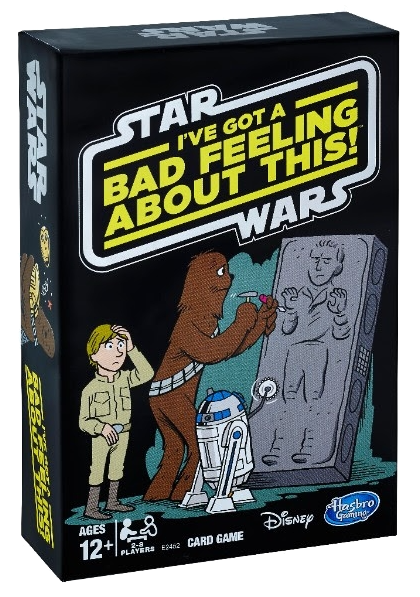 Even though this game has a copyright date of 2017, I didn’t find out about it until this October. I saw it on the shelves at EB Games, attracted by the fun name and adorable artwork. I was able to resist buying it for a few days, before coming back to get it. “I’ve got a bad feeling” is my husband and I’s favourite Star Wars quote/meme. We often look at each other in the middle of a TV show or movie, saying “bad feeling?” / “bad feeling!”. So really, buying this game was inevitable.

This game has both the Hasbro and Disney name on it, so it is safe to say it is authentic, though not necessarily canon. The main appeal, for me at least, is the cartoony artwork on each card. As often happens, there is no artist credit, although the style does remind me a little of Darth Vader and Son, by Jeffrey Brown. Gameplay is basically a simplified version of Exploding Kittens, with the object being to avoid or escape the red Nooo! Cards. If you get a Nooo! Card, you lose; unless you can play a blue Escape Card. But there’s a catch, the escapes aren’t just cute images, they each come with a consequence. For example, if you play the Lose a Hand escape, then you can only use your left hand for the rest of the game. If you play Go High Pitched, you must make R2D2 sounds every time you play a card. These challenges are mandatory, if you forget to do them even once, the escape is canceled and you lose immediately. If you manage to acquire, and use, more than one Escape Card, you must perform all the activities.

The game is set up for between 2 and 8 players, so there are 8 unique Escape Cards and 7 unique Nooo! Cards. The remaining 48 cards are all Action Cards, which affect either the cards in the draw pile or the cards in the players’ hands. There are 12 different actions with 4 cards each. To start the game, the dealer gives each player 4 Action Cards and 1 Escape card; any remaining Escapes go in the middle table as the Discard Pile. Next, Nooo! Cards are randomly shuffled into the deck, equal to one less than the number of players. The shuffled deck is placed next to the Discard Pile, becoming the Draw Pile.

The main strategy is to not use your Escape unless absolutely necessary, by using the Action Cards to avoid the Nooo! perils, or force the peril on another player. At the beginning of your turn, you can play as many cards as you want (or none at all) until you play a card that says “this ends your turn”. At the end of your turn, you must draw a card (unless you play a card that says you don’t). If a player leaves the game because they cannot escape, that Nooo! Card, along with the rest of their hand, goes into the Discard Pile. But, if a Nooo! Card gets countered by an Escape Card, the Escape Card is discarded (sorry, you don’t get a reminder of your escape action), and the Nooo! Card gets shuffled back into the draw pile. The winner is the last remaining player after everyone else has dropped out.

What I enjoy the most about this game is its fun, light-hearted feel. None of the perils are too sinister. (They range from “Nooo! You kissed your sister” to “Nooo! You blew up the Deathstar”.) None of the escape challenges are too horribly embarrassing either. (Unless you really hate getting/giving hugs.) I also like that gameplay is simple, without being simplistic. All the cards are straightforward and easy to understand, but there are still tactics and strategies involved. My only complaint is that the game can last longer than you would expect. The first time I played, the red card didn’t show up until the very bottom of the deck, in spite of that deck being reshuffled three times during gameplay. And that was only a two player game. Even though this game can technically be played with 2 people, it becomes much more enjoyable in larger groups.

You can find Hasbro gaming at hasbrogaming.hasbro.com or on at facebook.com/hasbrogaming.