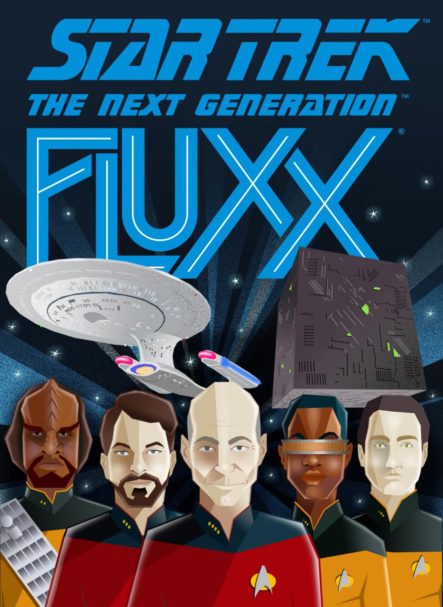 Space. The final frontier. These are the voyages of the Starship Enterprise, it’s 10-40 minute mission to boldly go where no game of Fluxx has gone before. (except for in The Original Series version of Star Trek Fluxx, of course)

I’ve admitted before that I am a Trekkie and while some days it feels like I’m as old as time itself, Star Trek: TNG was the show I discovered first, not the original. So as exciting as Star Trek Fluxx was, Star Trek: TNG Fluxx is the real nostalgia moment for me.

Just as with the original era Star Trek Fluxx, and every game of Fluxx, the game starts with two Basic Rules: Draw 1 – Play 1. That’s everything. Inevitably a new player wants to know how you win, but at the start of the game, there isn’t one. As the game progresses new rules are played that change things like the Draw – Play rules, put a new winning condition into play, or just about anything you can think of. Generally to win a player needs to have specific Keeper cards in play, and no Creeper cards in play (unless specified by the Goal). Goal cards could change at any moment, throwing certain victory into the prosthetic makeup enhanced jaws of defeat.

All the basic New Rule cards are in this set. So as you play you may suddenly be drawing three cards and only allowed to play one, or you could end up drawing one card and being forced to still play three. That bit of chaos is what makes Fluxx what it is. It’s what has brought players back year after year for over two decades. I won’t go into a ton more detail about the mechanics, but I did touch on them a bit more in my Star Trek Fluxx review.

The one thing that bugs me about this game is the art. Not the style of the art, but continuity issues it brings up. For the Creeper card Q, he is wearing the outfit most commonly associated with his first appearance in the TNG’s pilot episode. The game also includes Lt. Tasha Yar, who was killed at the end of Season 1. Yar was replaced by Lt (Jg) Worf in Season 2. Worf, obviously, appears in the game as well but he appears as a full Lieutenant, which wasn’t his rank until Season 3. This does allow the Keeper card Security Officers to happen, but I’m at a loss to why else Yar was included since most of the other cards seem to hover around Season 3, at least Q’s outfit resurfaced a few more times over the years. There were a few other things that felt out of sync, but I think I’ve made myself look as detail-nerdy as I really need to look for one day.

One of the neat things in both the TOS and TNG versions of Star Trek Fluxx is that the Keeper cards are split into two types. Crew Members have the classic Trek insignia on them, while Equipment has a set of console sliders. Certain cards will affect one type or the other like the Creeper cards Malfunction and The Borg, which attach to an Equipment Keeper or Crew Member Keeper respectively. There was a moment of hilarity when we realized that Data counts as BOTH Crew and Equipment, which is pure brilliance.

Whether you chose to play either era of Star Trek Fluxx on its own, or you combine the two together with the Bridge Expansion (below), you’re bound to have a stellar time. So pick up a copy, grab some tea, Earl Grey, hot, and make it so! The bulk of the cards are new Goal cards, that require cards from each game in play to win. For example, the goal card Generations requires Kirk and Picard, while Tomorrow’s Enterprise requires both Enterprises.

1 thought on “Star Trek: The Next Generation Fluxx”