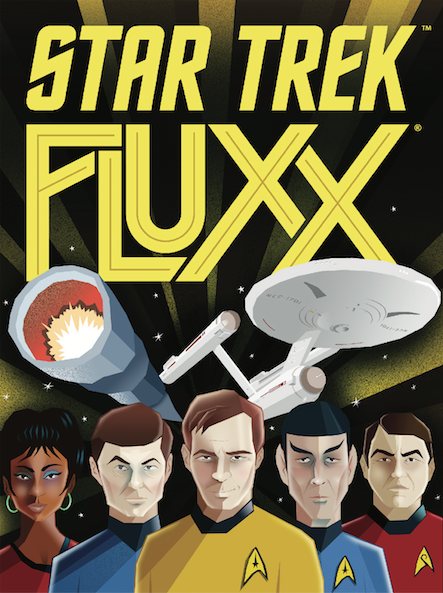 Space. The final frontier. These are the voyages of the Starship Enterprise, it’s 10-40 minute mission to boldly go where no game of Fluxx has gone before. <insert epic theremin music here>

I would say Fluxx is probably one of the most underrated and underexposed games to ever last over two decades. Whenever someone puts a copy down on the table there is usually a surprising (to me at least) number of people who have never heard of it. Since its creation in 1996, there have been countless themed versions of the game and it just seems that it’s relatively low price point and small size should make this a ubiquitous part of even casual gaming households, not unlike Uno or Settlers of Catan.

One of my favourite things about Fluxx is that there is a version for just about everyone. Many of the early themes were quite generic, taking on genres more than specific fandoms. As time went on, more specific editions came out covering things like Cthulhu, Wizard of Oz, and Monty Python and the Holy Grail. Move forward even more and there are still themes aimed at the general public like Anatomy, but there are also major fandoms like Doctor Who, Firefly, and now even Star Trek.

As with any game of Fluxx there are certain New Rule and Action cards that are fairly generic and present in every version. Changing the number of cards you can draw or play, and dealing with unwanted cards in play are all things that make Fluxx play like Fluxx. There are also some cards that appear in other versions under different names; again these largely necessary for the game to function, while still allowing the theme to permeate the form. But on top of these things are the gems of inspiration that truly make a specific theme on Fluxx glow. A great example of that is the Action card Fizzbin. Fizzbin is a crazy and complex card, just like the game spontaneously created by James T. Kirk in the episode “A Piece of the Action”. It’s a card that is strange enough to fit into Fluxx on its own while being an obscure enough reference to make hardcore Trekkies squeal in delight.

The theme becomes most obvious in the Keeper and Creeper cards. Keeper cards are what a player needs to meet a Goal. For example, the Goal card At the Helm requires a player to have the Keeper cards Enterprise, and either Sulu or Checkov. Creepers are usually bad cards that come into play as soon as they are drawn, and a player can’t win with a Creeper in front of them unless the goal specifically requires it. For example, a player could not win with At the Helm if they also had the Creeper card Mirror Version in front of them, even if they met all the conditions of the Goal. If they also had the Keeper card Spock, they could win with the Goal Spock’s Beard, though, because it requires Spock and Mirror Version.

I also need to bring special attention to the glorious Goal card, He’s Dead, Jim! To win Kirk, McCoy, and the generic “red shirt” Ensign Smith needs to be in the discard pile.

I am without a doubt, a Trekkie. So the theme here is something I loved on sight. Fluxx, while a game I don’t get to play as often as I like, is a game I am unlikely to ever turn down the chance to play. So, to have the two of them together is a wondrous thing. The bulk of the cards are new Goal cards, that require cards from each game in play to win. For example the goal card Generations requires Kirk and Picard, while Tomorrow’s Enterprise requires both Enterprises.