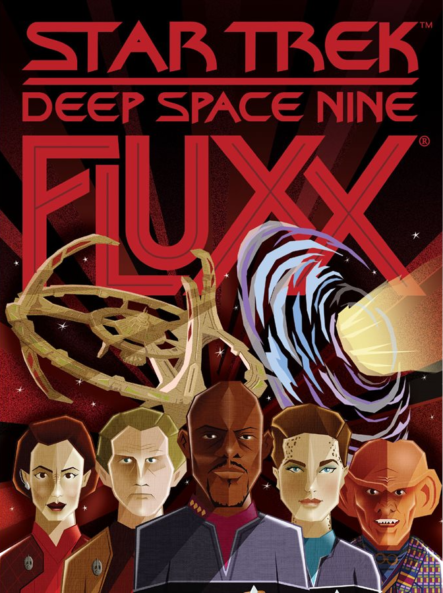 Space. The final frontier. These are the voyages of the Starship Enterprise, it’s 10-40 minute mission to boldly go where no game of Fluxx has gone before. (Alright, that intro doesn’t work as well here as it did for Star Trek Fluxx and Star Trek TNG Fluxx, but here we are.)

It’s been almost exactly a year since I reviewed a version of Fluxx, so for the new people, let’s quickly go over the rules. Every game of Fluxx starts the same, with two Basic Rules: Draw 1 – Play 1. That’s everything. Inevitably a new player wants to know how you win, but at the start of the game, there isn’t one. As the game progresses new rules are played that change things like the Draw – Play rules, put a new winning condition into play, or just about anything you can think of. Generally to win a player needs to have specific Keeper cards in play, and no Creeper cards in play (unless specified by the Goal). Goal cards could change at any moment, throwing certain victory into the alien jaws of defeat. While the rules are always changing, you must always obey the rules because “Obedience brings victory, and victory is life”, as the Jem’Hadar say.

On top of the Basic starting rule, the is a second Meta Rule that cannot be removed from play. Once per turn, “Five Card Misson” allows a player to discard any four Goal cards, and replace them by drawing five more cards. This card wasn’t included in either of the OST or TNG Star Trek Fluxx games, but it was included in the Bridge Expansion for them (see the bonus review at the end of either review)

As with other Fluxx games, most of the New Rule and Action cards are pretty standard, and some of the theme-specific ones obviously appeared in the previous games as well. But just as Deep Space Nine was a very different series than those before it, its Fluxx also has some unique changes that bear noting. Gone is the “Wormhole” Rule card, it has been replaced by “The Wormhole”, a Keeper card. Also gone is “Beam Us Up!”, replaced with the broader, but functionally similar, “Beam Us Back!”.

Until DS9, Star Trek had almost always represented a utopian future for humanity. It was very much good or bad, black or white. With DS9 it became immediately clear that everything aboard the Cardassian built station would have a great deal more grey in it. Actually, a great deal more brown. Cardassians really like brown. But colour pallet aside, there is no utopia on DS9. Rebellion, religion, corruption, shifting alliances, and shady businessmen. These are the things you find on Deep Space Nine. Those same blurred lines weave their way through the Keepers, Creepers, and Goals in the game. Characters you’d think would be Creepers, like “Dukat” and “Wayoun”, are Keepers, and a least one goal can be won with two Creepers alone. The Ferengi get a lot of love, as they deserve. There are multiple species-based goals, but their’s is called “Little Green Men” in reference to the episode where they crashed in Roswell, NM.

Finally, no game based on Deep Space Nine is complete without Morn. Whether you consider him a running gag, or one of the most iconic background characters in television history, It wouldn’t be DS9 without him.

I concede that Deep Space Nine remains my favourite Star Trek series. Does that make me biased? Maybe. Do I care? In this case, not really. Fluxx is a fun game, no matter what the theme, but DS9 Fluxx is definitely my favourite of the of Star Trek versions, so far. The bigger question will be if future Star Trek Fluxx games are coming, and will they be able to change my mind?

Star Trek Fluxx is made possible through a co-licence with Gale Force Nine who can be found at www.gf9.com or on Facebook at facebook.com/GaleForceNine.