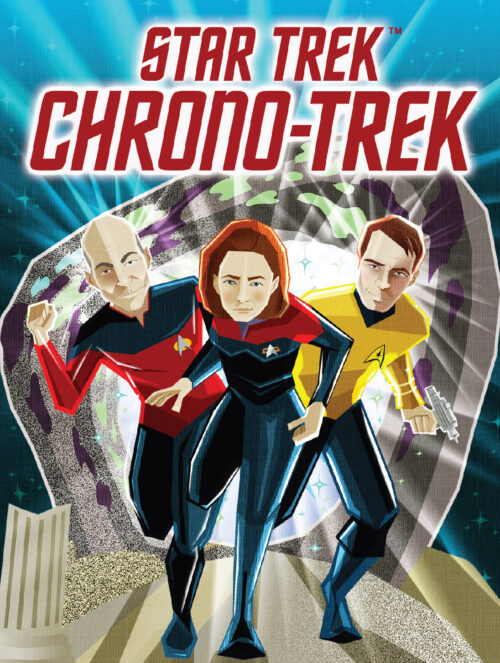 Let’s start with this: if you’ve read my reviews of Star Trek Fluxx, Star Trek TNG Fluxx, and Star Trek DS9 Fluxx, two things should be apparent. First, I am a Trekkie. Second, is that I have a deep respect and admiration for Andrew Looney’s encyclopedic knowledge of all things Trek. Nowhere does that knowledge shine through as heavily as in his game Chrono-Trek.

The history of Chrono-Trek (if you’ll excuse the time-traveling puns) dates back nearly two decades, to the award winning game Chrononauts. Chrononauts explored the Ripple Effect theory of time travel, in which a small change in the past could have major effects on the future. For better or (arguably) worse, time travel has been a major story element in Star Trek since the very beginning. The match couldn’t be more obvious, it just needed the right… well… time.

There are three main elements to Chrono-Trek. The most noticeable in the Timeline, 36 cards specifically arranged in a 9×4 grid. The timeline runs from life beginning on Earth, flowing forward through many of the most notable points in Star Trek’s past, present, and future. Some of these points, called Linchpins, can be changed. When a Linchpin card is flipped over, the effect ripples out to change other cards in the timeline as well. If conditions are right (or wrong, really) a Fracture may happen, permanently changing an event yet again.

The second element is the Main Deck. This is, somewhat obviously, the main deck for drawing cards. There are seven card types. Actions and Power Actions (single use cards), Assignments (collect and play two specific Artifacts), Artifacts (“things” you play in front of you, often needed to win), Inverters (used to change the timeline), Events (play immediately and redraw), and Fractures (a permanent change to specific points in the timeline).

The last element is the ID Deck. There are a number of ways to set this up, but this deck is where players will draw an Identity from. Your Identity card is more than just who you are, it also provides your individual win conditions. The cards are grouped into difficulties, ranging from one to four using uniform style pips. When you are first learning the game, it’s recommended you play a game at each level to get used to it. One-pip characters have very easy goals, and our play only lasted a few rounds on them. Two-pip characters are equally simple but have slightly more challenging goals. Three-pip characters start to get more interesting, with goals more heavily focused on Artifacts. Four-pip characters usually involve having one or more Fractures in play. The major exception to that is Q (because of course Q is different) and I’ll come back to him. But first, we need to look at one of the major things that sets Chrono-Trek apart from its predecessors, The Devron Anomaly.

So, previous Chrononaut games have run on a 32-card, 4×8 timeline. As I mentioned, Chrono-Trek is 36-cards in a 4×9 timeline. What changed, you may ask. Well, that change is the addition of four Anchorpoints starting in 2395 (the last card on the Timeline). These four Anchorpoints, plus the first card (3.5 BYA- Life Begins on Earth) are never changed by Inverters or the resulting Ripples. They are usually changed as a result of Event Cards, Starting with an anti-time anomaly erupting in the Devron System, and expanding backward through time until it finally expands to earth and prevents life from ever starting. Some of you may remember this as the plotline to the series finale of The Next Generation, “All Good Things“.

Bringing all seven seasons around full circle, that episode also heavily featured the enigmatic and omnipotent fan favourite, Q. The winning conditions on Q’s ID card is that the Devron Anomaly expands to flip all five Anchorpoint cards. If Q isn’t one of the characters in play when that happens, the game ends and everyone loses. Unless, of course, one of the characters happens to get an Invitation To Join The Q, and they survive to win the game.

For experienced gamers, playing through an exclusively one or two pip game as even a fast intro is likely to be tedious. Whereas exclusively three and four pip games take more time and thought, making them more enjoyable. Once you have a decent idea about how the game runs, you can mix the difficulties together, with characters all starting play with as many cards as their Identity card has pips as a handicap.

This is not just a fun game, it’s a particularly well thought out game. Several of the identities (and other cards) make some delightfully obscure references, which will delight the more knowledgeable fans without alienating non-fans. The art is very nice, but more importantly, the card layouts and iconography is exceptional. There is an array of colours, showing different card types, for the majority of players. But the cards are also visually distinct, with clear icons, and text notations that will allow most colourblind players or players with minimal English literacy to play without any significant difficulty. These are all very subtle inclusions that take an already great game and make it even better.

The more I type in this review, the more subtle details I notice. This may well be one of the best Star Trek games that I’ve played in more years than I’m willing to admit.

If you want to know how many references are in this game, creator, Andrew Looney, made a list at www.LooneyLabs.com/Trek201.

Star Trek: Chrono-Trek is made possible through a co-licence with Gale Force Nine who can be found at www.gf9.com or on Facebook at facebook.com/GaleForceNine.