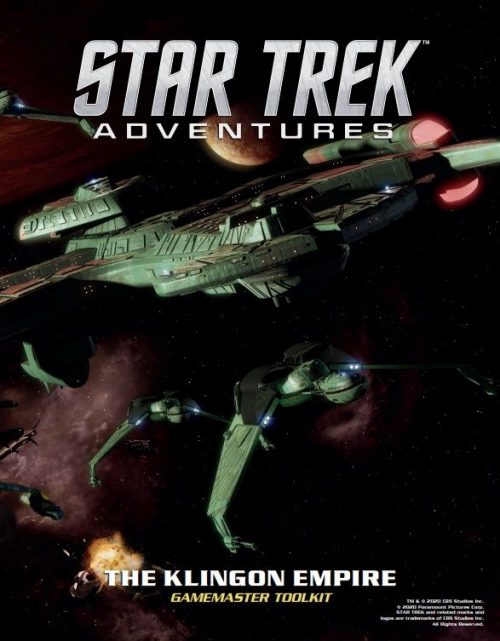 [If this is your first experience with Star Trek Adventures, consider starting with our review of The Klingon Empire Core Rulebook. -dc]

Welcome to a rather unique “Accessories and…” review. Unique, and to be perfectly honest I hope it remains unique. Today I’m looking at the DIGITAL version of the Klingon Empire Gamemaster Toolkit from Modiphius Entertainment. I want to be completely clear here, the vast majority of what I’m about to say is referring specifically to the digital version, not its physical counterpart. I also want to be clear up front that I’m not generally a big fan of most digital products.

First, let’s breakdown what comes in the toolkit:

First the maps. These come as a single, two-page, PDF file that is high enough resolution to print as an A2 sized poster. That’s roughly 16″x24″ for those of us that aren’t papyrophiliacs. For the record, they are also the same maps that grace the inside covers of the Klingon Core book, so they probably aren’t worth the trouble to specifically print out.

Next are the six reference sheets. Five of them cover common positions aboard a Klingon vessel. The backside of all five is the same, a summary of general rules that apply equally to every player. The front is individual to specific positions: Security Oversight and Tactical, Sensors and Internal Systems, Communications and Internal Systems, Helm and Navigation, and Command. None of them are formatted exactly the same, but broadly cover the actions and tasks common to that particular position. The sixth sheet is a Conflict reference sheet. This page is one of the few big advantages to having the digital product. Every player can use a reminder of the minutia of conflict. So being able to print out copies for everyone at the table that wants one, instead of sharing a single page, is super easy to do.

Unfortunately, the same can’t be said for the GM Screen. I have a customizable four-panel screen that I was excited to use for this, but the files for it are all but useless. There are two massive (and poorly labeled) PDF files, one for each side of the screen. The GM side is full of stats, lists and charts that a GM may want to reference quickly, along with a note of the page number in the rulebook for more information. It’s not four individual pages, however, it’s one image four pages across. Thankfully, nothing crosses what would be the folds in the screen, so it’s fairly quick and easy to crop down to one page, print it, crop out the next page, and so on. The player-facing side has a beautiful panoramic view of a fleet of Klingon ships, clearly engaged in glorious battle. But, it’s also a single image, four pages wide. It’s impossible to print (without a large format printer) and impossible to easily chop up like the GM side. I ended up converting the PDF into a JPEG, then running it through an online poster making tool, which spit it out as a PDF again, but in four printable pages. For the small segment of people that can print it as a single file, the big file is great, but I would give my last targ to have had a properly paginated version as well as the panorama.

The last part of the Toolkit is the one-shot Klingon adventure, The Sleeping Beast. I did a separate, more detailed, review on that yesterday. So I’ll keep this brief. More than anything, this is probably the make-or-break element, in determining if a GM should buy the physical Toolkit or this digital version. Some GMs are ok running adventures from a digital source. Some GMs even prefer it, while others hate the idea.

The only other thing I’ll mention about the adventure is that is billed as a 20-page standalone adventure, but those 20 pages include the front and back covers, 2 ads, the credits, and table of contents. So technically there are 20 pages, but it’s far from a “20-page adventure.”

Overall, do I think the DIGITAL version of the Gamemaster Toolkit is worth it? Speaking for myself and my process, I’m not sold on it. It really comes down to what you want it for. If you want the GM screen, I’d hold back for now, but if it’s you have a group hyped to play the adventure, it may still be worth the cost to go digital. Although, the physical Toolkit is still crawling its way to retail shelves, so I can’t really give a proper price comparison.