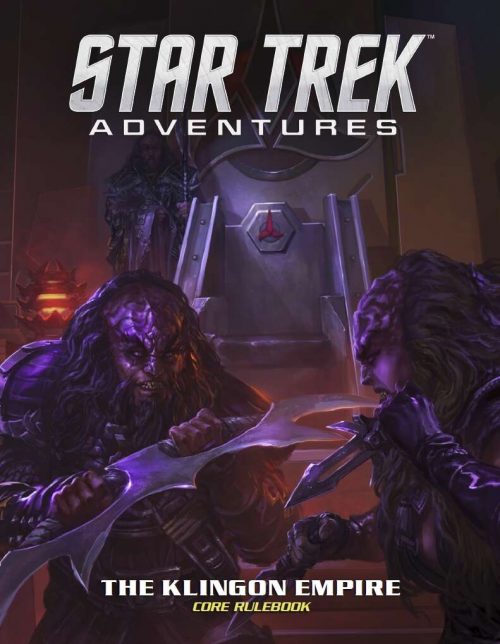 I don’t remember how I found Star Trek, but I think it was through a friend. We would both rush home to watch TNG after school, a timing only just barely possible on foot. It aired opposite Oprah around here, which may seem like a weird detail to remember decades later, but it was a thing. It even got immortalized by the band Captain Tractor, in one of their older songs: “Lonely Inanimate“. But I digress. My point here is that I’m an unabashed Trekkie and have been for a very long time. I’m also a proud crew member of the IKV Swifthawk, of KAG’s Northern Storm Fleet of Western Canada. (Most people have heard of the work done by the Stormtrooper fan group 501st Legion, now picture that but with Klingons.) All of this comes together in the fact that I was excited when Star Trek Adventures first came out, but having The Klingon Empire released as a CORE rulebook blew my mind.

The first, and most obvious question here, is why would Modiphius create a different core rulebook for Star Trek Adventures? There are a few answers to this: First, and arguably foremost, is that it provides an update to the STA 2d20 ruleset. This isn’t an entirely new “second edition” but it does allow for more nuanced explanations and examples, based on three years of real-world player feedback and a few other 2d20 game releases. While these rules are meant to be clearer, they aren’t specifically new or drastically different. But what IS different is the book’s approach to the rules and the style of play that a Klingon adventure has, and should have, compared to a Starfleet adventure.

Keeping in mind that I don’t have the original STA core book, only a quickstart, some research, and my own knowledge of Gene Roddenberry’s legacy. The biggest mechanical change is how character advancement is handled. At the end of each adventure, players write down a brief “log entry” of their character’s actions during the adventure, with some great suggestions for shorthand, and how to notate a particular adventure. A character gains a “milestone” if, at the end of a subsequent adventure, they were able to connect a current action to a previous log entry, which allows the player to adjust and grow their characters (or even their ship). As they connect more milestones together they create a character arc, which allows for more significant changes to be made. This is a great advancement system that is entirely player-driven. Players can’t just go Cardassian Vole hunting for some easy experience points, they have to make specific, character-based, roleplaying decisions.

Another big difference – and I suspect it’s a difference from other games using the 2d20 system rather than the initial Star Trek Adventures rules – is the unique character creation options. There are two options on HOW to create a Player Character, with both options eventually result in a roughly comparable result. The first is the more traditional “Lifepath” method, in which the character is mechanically created through a singular, seven-step, process. The second uses “Creation in Play” in which the character’s base stats are created upfront but the more personalized stats, like that character’s Talents and Disciplines, are left blank and defined as the adventure progresses. One thing that is a distinct difference between STA editions is the verbiage used during this process. One example is a character’s Upbringing in the original game becomes their Caste here, they are functionally the same thing but reflect the different lens through which societal roles are viewed between cultures. That same lens is applied to most areas of the book and the game, which is kinda the point if you weren’t already clear on that.

One of the other important elements that make STA unique is the inclusion of “Supporting Characters”. These are characters that land somewhere between PC and NPC. If you are playing aboard a ship, there is a good chance the players are spread out in different areas; one of the best reasons not to “split the party” in RPGs is simply that it can get boring for the players not part of a scene. That’s where Supporting Characters come in. If the action is happening on the bridge, the engineer is probably in the reactor pit. (Because pulling a Scotty and hanging out with your buddies upstairs isn’t particularly honourable.) So that player can take control of a Supporting Character who is more directly involved in the action, and when the focus goes back to their regular character the other players can do the same in that scene. It also results in an already created character when Susie’s boyfriend unexpectedly decides to drop in and check out what she does every Wednesday night. It’s a nice balancing mechanic, that can add depth to the story and provide a more engaging experience for the players.

This gets reinforced with the incorporation of Klingon translations for many of the terms in the books, although some of those translations seemed a bit awkward to me at first. I’m not a Klingon linguistic expert by any stretch, so I actually reached out to one. Chris Lipscombe from the Klingon Language Institute directed me to the Klingon Assault Group‘s Hol ‘ampaS (Language Academy) which is an infinitely more comprehensive website than just an online translator. (seriously, if you’re interested in the Klingon Language, check it out.) Even without my personal need to dig deeper, I just love the extra flavour. The only way it would have been better is if Modiphius had included more translation in proper pIqaD script, but the book already pushes 400 pages so I can see why they might not do that. Let’s just leave this at “yay, they took the time to translate a bunch of game terms” since that’s all most people will notice. There is also a highly condensed Klingon Language Primer near the end of the book, as well as notes of thanks to Marc Okrand and the Klingon Language Institute (amongst others), so please don’t think I ever thought they didn’t do their due diligence here.

That ability to distill massive amounts of source material into something that could easily pass as an in-game artifact or even a legitimate academic publication is one area that Modiphius excels at. With games like Conan and John Carter of Mars, they had a static body of literary work, with anything later is simply being a derivative without expanding on canon. With Star Trek, they have 10 televised series (including Short Treks), 13 films, as well as hundreds of official publications, to draw on. That’s not even looking at the proposed Discovery spinoff shows. Nearly a quarter of this book is dedicated solely to an examination of Klingon history and culture. Because Star Trek is so ubiquitous in modern pop culture, the average player could sit down at a table and play a Starfleet themed adventure and know most of the overall concepts. But it takes a different sort of passion to play a Klingon themed game. If for no other reason than Klingons do EVERYTHING with passion.

I could probably end on that note, but there is one specific thing that I still can’t get out of my head. Have you ever seen the old Steven Segal movie Under Seige? In short, he plays a navy cook with a history. Bad guys take over his ship and Steven Segal-ing happens. Well, one of the roles a player may choose in the game is legitimately the Ship’s Cook. It’s not some toss-away joke, it’s a position that comes up specifically, with distinct abilities and supporting elements throughout the entire book, including in ship design. I DESPERATELY want a one-shot adventure geared at the cook, a’la Under Seige.

The other thing I would be remiss in not mentioning is tribbles. This ancient enemy of the Empire comes up a completely reasonable amount within the rulebook, but did you know that Modiphius released a free PDF for Tribble Player Characters? They did! It was intended as an April Fools stunt, but IT’S REALLY A THING!!!

I think that no matter how you look at this book, as a core rulebook or just a really comprehensive sourcebook, The Klingon Empire Core Rulebook for Star Trek Adventures hits everything it was aiming for.