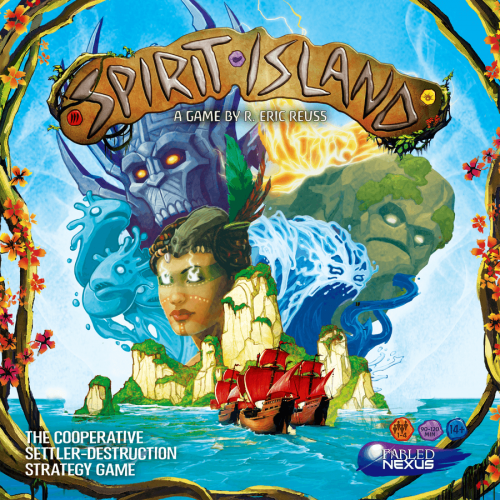 Spirit Island. Spiiiiirt Islaaaaand. Ya. Ever have one of those games that despite your best efforts you just can’t get it played? Spirit Island has been one of those games for me. Had one game night fall apart, another group wasn’t into it. Looked at learning it solo but it didn’t click. Not to worry, there was going to be a teaching session and beginner-friendly tournament at an upcoming convention in the spring. Well, we all know how spring 2020 went… and summer… and fall… sufficed to say the event didn’t happen.

When we first went into lockdown I shuffled around a few things and made a list of solo options, but we came out of lockdown before I got to this one. Social restrictions in Alberta have been inconsistent at best, but fast forward and the province is in a worse lockdown than before. Back to solo games, and Spirit Island is at the top of that pile.

First thing’s first, I’ve enjoyed Spirit Island and look forward to playing it again with other people. I want that to be the first review-y thing I put down here because it’s very much true. Now that being said, this game was intimidating to learn solo. There are a LOT of metaphorical moving parts here, and the rulebook is rather girthy. I watch several set up and how to play videos – yes, sometimes even the teacher needs to be taught – and it got less intimidating. I started to feel pretty confident I knew what I was doing, so off I went.

Being fairly certain this was going to be a review exclusively on the solo experience, I wanted to start with the purest version of that: a single Spirit. For the record, that’s a terrible plan if you want to actually win the game. But at that point, my goal was just trying to figure out the game. To that end, I think it worked. Mostly. Once you’ve got a handle on the rules, a solo player can control two separate Spirits, and the game setup expands to accommodate that. but for first learning, one spirit is completely playable. Just likely not winnable.

One of the advantages to all the content in this box is that most of it isn’t needed at first. Some of it is stuff that can be scaled back for an easier game, while others are value-added content for more replayability. I’ll go through the gameplay, and do my best to flag some of those specific options without dwelling on them too much. As well, I’ll avoid most of the setup details, beyond pointing out that they scale beautifully, depending on the above mentioned Spirit/Player count.

Gameplay is divided into phases, with each phase happening effectively simultaneously for every Spirit. Since the game is cooperative, communicating your intentions is likely a good idea. It would be unfortunate if you and other players accidentally took actions that rendered each other ineffective. (Advantage to solo play, I guess?) In the Spirit Phase, you’ll choose a Grow option, which is different for every Spirit, but generally this involves expanding your influence on the map and/or gaining access to more actions, cards, and energy. Once that is done you gain any more energy you are allotted for that turn and play as many cards as you are allowed, as long as you can pay for them. How much energy a Spirit gets and how many cards they can play will increase as the game goes on. When the player chooses a Grow action that allows them to place influence, they take a token from their board and places it on the map, which reveals a new value for energy or card-plays going forward. It’s an elegant mechanic that I’m surprised more games don’t employ.

As cards are played, their activations are divided into two categories, Fast and Slow. Once the Spirit Phase is complete, Fast Powers happen in whatever order the players want, before the Invaders take their turn. First, any Blighted Island effects (if applicable) and Fear cards that affect the turn happen. The rest of the Invaders’ actions are apparent from the beginning, as the location cards advance through each action from turn to turn. First invades Ravage the land and any indigenous Dehan people in all the spaces indicated on that location card. Damage is dealt to BOTH the Dehan and land itself, and if any Dehan are left alive they will attack back. If a land takes 2 or more damage a Blight token is removed from the Blighted Island area and placed on that space, if there is already Blight there it cascades out to the surrounding land spaces. (This is a good way to lose the game.) Next, the invaders Build towns or cities in any spaces they are in which matches the land type on the card. Then if there are any invaders in or adjacent to the land shown on the card in the Explore space a new Explorer is added to those spaces. Finally, the Invader cards are advanced. Where they Explored this turn, they will Build on the next turn, and Ravage the on the turn after that.

When the Invaders have finished, any Slow Powers on cards that Spirits played happen, just like they did in the Fast Power phase earlier.

Then “Time Passes” allowing players to remove spent cards or tokens, and such, before starting again with the Spirit Phase.

Once you get into the flow of the game, all of this becomes pretty straightforward. Most of the problems I encountered were almost entirely self-induced. As I played more games those problems became less about rules I forgot or misremembered, and more about my own failure to pay attention to small details. I’d play a card and afterwards realize that it wasn’t usable when or how I used it, which isn’t really the game’s fault.

Oddly, there are two things that are normally pet peeves of mine, that I found myself completely overlooking with Spirit Island. First is the box insert. It’s terrible for storing the components. Here’s the thing, I don’t think that it’s supposed to. It works really well for holding the component DURING the game, with tons of bags for actual storage. The second thing is the consistency of components. Some components are cardboard, some are wood, and some are moulded plastic. But it worked together surprisingly well. The Invaders are all in the same moulded plastic, with Blight tokens in a different plastic. The Dehan are in plain wood. The Spirit presence tokens are coloured wood, with matching effect-reminder tokens in cardboard. In some games, this would come across as feeling awkwardly inconsistent; but it has the opposite effect here. The board can get very crowded, very quickly, and having such drastically different pieces makes everything much clearer.

I have heard people complain that there can be a lot of player downtime, but this isn’t as relevant as a solo player, regardless of how many Spirits you control. Quite honestly, I look forward to comparing it with a multiplayer game when it becomes safe to do so again. I do have the Branch and Claw expansion, and players interested in playing it with me, so now if people around here would smarten up so I can meet with them again… that’d be great.

As a solo game, Spirit Island isn’t for me. I LOVE the theme and I enjoy the game, but it just doesn’t work for me as a solo thing. Just to be abundantly clear, I don’t believe that the solo mode isn’t good; I just didn’t find it a good fit for me personally.

You can find out more about Greater Than Games online at greaterthangames.com or on Facebook at facebook.com/GreaterThanGames.