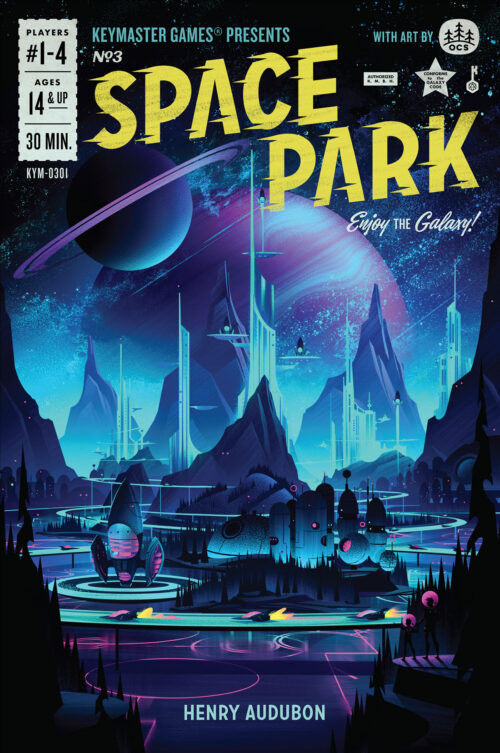 Welcome to another edition of Quarantine Solo Mode! One of the few things I can be thankful for during this pandemic is that there are a ton of great games that offer a solo play experience. Today we are going to look at Space Park by Keymaster Games. I’ll go through the regular multi-player rules first and then the solo differences.

The Space Park game area consists of two rows of three locations. The locations are modular and arranged randomly for each game, so every game is a bit different. The only consistent location is the seventh, double tall, Starlight Station that is always at the far right. Each location allows the player to take a specific action or gain a specific resource. Players don’t have their own markers, but rather they share three rocket ships figures. On their turn, a player chooses a location that has one of the rockets on it. Once that location’s action or resource has been taken, the rocket takes off and travels clockwise to the location without another rocket on it. As the game progresses players will need to not only watch what resources they need for themselves but also anticipate what their opponents need and the actions they are most likely to take (thereby advancing the rocket ships to a new location).

When a player gets to 20 eXploration Points (XP) any players remaining before the First Player get a final turn after which the highest points wins. XP are most commonly earned by putting Badge cards from Starlight Station into your hand, and then turning in Sun, Moon, and/or Sea Crystals at Outpost 13 to earn a badge from your hand.

In the solo rules, most of that stays the same, but there are some significant differences as well. The lone player is working against the clock against an AI Scout. In the multiplayer rules, Scout is a player-controlled moving resource. But here, Scout moves to a new location after every turn, requiring the player to pay in order to travel there. When the Scout moves, the player flips over (and discards) the top card of the Badge deck, each card has a symbol on it to determine where Scout moves. When the Badge deck runs out, the game ends. If the player has 20 or more XP they win, if not they lose.

The strategies and the challenges between solo and multiplayer games are very different, but both seem fun. (Again, I can only play solo right now.) Having played several versions of Keymaster Games’ Campy Creatures and its Expansion, and having seen their other games, There are a few things that they all have in common. The components are always high quality and the games are all quick to learn and addictively fun to play. The last, and most noticeable, thing to say about Keymaster is that they have some of, if not the most, gorgeous art on the market today. As I sit here, I can think of any number of beautifully illustrated games, but none hold a well-painted candle to Keymaster.

If I jumped onto the top-# list bandwagon, I would put Space Park somewhere near the top for lightweight solo games. No promises on a future review, but I’m definitely setting this aside to look at again when we can safely have game nights again.