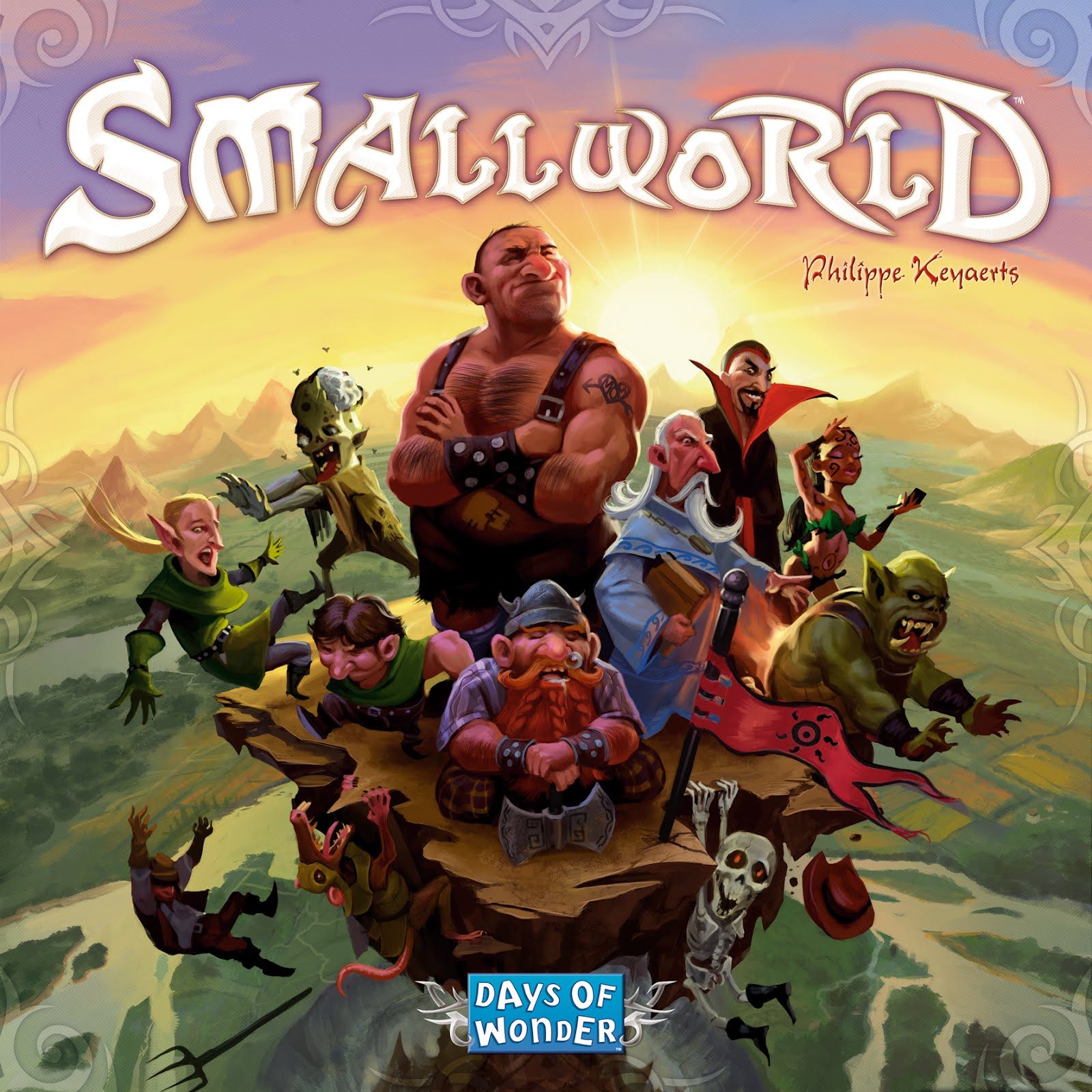 Small World is an old favourite of mine. Its place in my collection predates my time reviewing games, and as such has never been the subject of my rambling keyboard musings. So when I unexpectedly came into possession of the most recent expansion, Sky Islands, I jumped at the opportunity to dig out this gem of a game.

Almost everyone I know has either played Risk or has heard the tales of playing Risk. There comes a point in Risk, and arguably many other games, where nothing short of divine intervention is going to win you the game. Your forces are depleted, your territories have been overrun, and most of your turn is spent hoping for either a miracle or a swift death. Small World takes that experience not as a flaw, but as a commentary on the undeniable truth of history. As one empire inevitably falls, another grows to take its place in the world. For Small World that truth isn’t just an immutable fact, it’s the key to a great game.

In keeping with that, when a player selects a race to play they only get a finite number of tokens to play with. Not every race gets the same number, and there are only a small handful of races that can gain or recover tokens during play, but even they are limited. Because of these limits, there is only so much territory any single player can occupy. So to ensure that conflict happens there are different maps, with more or fewer territories to conquer, depending if there are 2, 3, 4, or 5-players (with several expansions expanding that to 6-players.)

Setup continues by shuffling and drawing five (out of 14) races and placing them next to the remaining face-up pile. each of those is randomly paired with one (of 20) individual powers. This unique process ensures that it is unlikely you’ll get the same combinations in multiple games, and almost impossible to see it twice in the same game. The first player may select the top race/power or pay one coin to skip to the next one. They can choose that combo, or pay again, and so on down the line. Each race/power below the chosen one moves up a spot, with a new set being revealed on top of the pile at the end. Any coins paid to skip a race, are collected by the player who does choose it, so sometimes it’s more advantageous to take a less desirable combination to gain the additional coins that count as victory points in the end.

Once a player has their race, they collect their tokens and any other tokens granted by their power or racial ability. They take those tokens and move onto the board starting from any region on the edge of the board, and continuing on to adjacent regions if they wish. The number of tokens required to conquer any given region can vary, but often a player will end up with fewer tokens than can be used to conquer a final region. On that last, and only the last, conquest attempt of their turn a player can roll a die that grants between zero and three reinforcements, and if they still fail the remaining tokens are simply added to a previously conquered space. At the end of a player’s turn, they gain a coin for each region their tokens occupy.

After their first turn, if a player chooses, they can spend their turn going into decline instead of conquering. If they do that they flip over their race banner, along with a single token in each region they occupied at the start of the turn. Their special power plus any remaining tokens are discarded, and they will choose a new race/power at the start of their next turn, placing the new race’s tokens just like in the first turn. A race in decline may not take any actions but will continue to collect coins for their player until they are either wiped out by living races, or that player puts the new race into decline as well.

The game only lasts a certain number of rounds, based on the number of players, so it’s not always to good to go into decline. Similarly, you need to plan your strategy based on when you know the game will end.

If all you ever purchase is the base game, you will get a ton of replay value out of it. I can’t think of anyone who’s tried Small World and didn’t love it. But there are also all sorts of expansions that add new races, powers, terrain, and ways to play. Come back to The Rat Hole on Thursday and you’ll be able to read up on the most recent expansion (not counting the Power Pack reprints), Sky Islands.