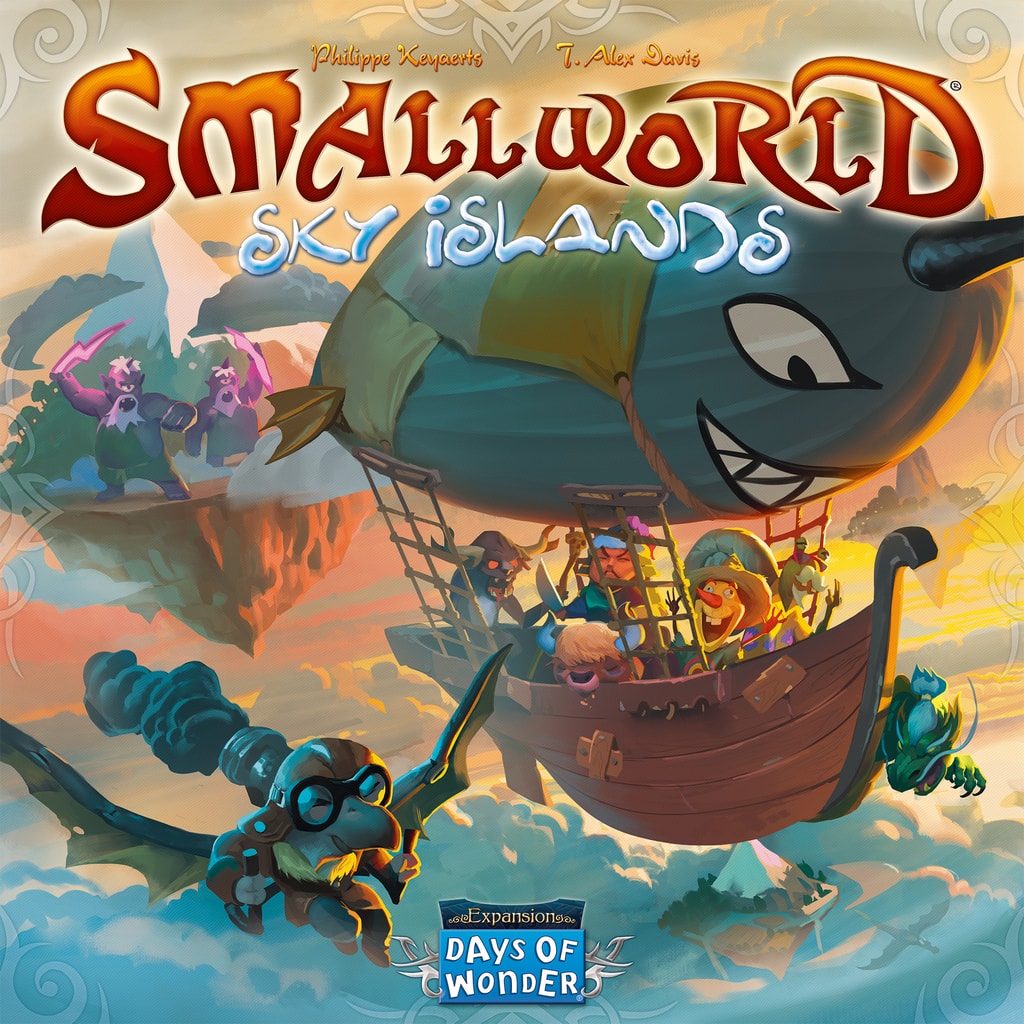 As I mentioned in my earlier review of Small World, this game is an old favourite of mine. So when I unexpectedly came into possession of the most recent expansion, Sky Islands, I jumped at the opportunity to dig out this gem of a game.

The Sky Islands expansion brings a couple of new options into Small World. First of all, it adds a new area of the board. The expansion’s namesake Sky Islands. As with most boards, the Sky Islands board is double-sided. One side has two islands, for use with the 2 and 3-player boards; the other side has three islands, for use with 4 and 5-player boards. Because all of the standard boards are carefully designed to accommodate a specific number of players, the addition of more regions changes that balance. As such, if you have 3-players you’ll use the 2-player board, for 6-players you’d use the 5-player board.

The Islands themselves are only accessible in three ways. flying races or powers that grant flight can access them directly. Anyone else needs to use either the Magic Beanstalk or the Stairway to Heaven. Each of these permanently connects a single region on one of the Islands to a region on the main board, that gets a matching token. The Islands themselves have a cloud bridge between them, allowing those connected regions to be considered adjacent for purposes of conquering them. The other bonus the Islands give is that if a player’s active or in decline race controls all the regions on an Island, they get a bonus victory coin at the end of their turn. All that combined makes the potential for a ton of great in-game conflict to happen.

The other thing Sky Islands brings is a new set of seven races and seven new powers. There have been enough years, and enough previous expansions, that some of the races, like the Khans and the Drakons, are less distinctly racial (which is neither good nor bad) and some of the races, like Escargots and the Scarecrows, are also getting a bit on the goofy side (which again is neither good nor bad). The Storm Giants and Wendigos are closer to a traditional fantasy race, and the Scavengers aren’t really “traditional” but certainly aren’t human.

The various racial powers are fairly diverse and really add a lot of fun to the game. Some of them seem overpowered on the surface, but honestly, there are enough races that seem that way throughout the whole game that it just adds to the chaos and fun. All the powers here are interesting, but one of the most unique is that of the Scarecrows. Each time a player conquers a region occupied by active Scarecrows, that player gets an extra victory coin. So aside from sheer volume of starting tokens, There’s very little benefit after the first turn for the Scarecrows. The only way they could be a more challenging race would be if they got paired with the Cursed power (from the mini-expansion of the same name).

The new powers are similarly diverse. Haggling is a high risk, high reward power. Airborne, Gunner, and Zeppelined (something I have never heard used as a verb before now) all give different bonuses when conquering, and Goldsmith, Racketeering, and Exploring, all give additional victory coins for things. While several of these new races and powers specifically reference the Sky Islands, only the Exploring power is explicitly supposed to be removed when not using the Sky Islands board.

Sky Islands is a great addition to Small World. The box does come with an insert for the extra components, Which is great. Expansion storage was something that was an obstacle for me when I first got the base game. Many of the original expansions needed you to buy one expansion with a tray, and the others were just tokens. As a consumer that turned me off, and was one of the reasons Small World stayed in storage for as long as it did. But the re-release of those older mini-expansions as a pair of collected Power Pack expansions (complete with trays), I may be looking at re-investing more time into this game.

[Some of my friends really, REALLY, enjoy pushing games to the ridiculous extremes, so it’s tempting to pull together an epic-sized combined game of Small World, Small World: Underground/Realms, and Sky Islands. I’m sure we’ll need to do some house ruling for it, but it’s very tempting. -dc]