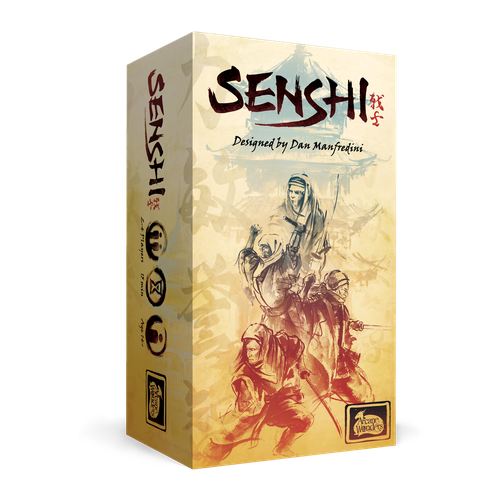 Western culture is often accused of fetishizing Asia. So, at the risk of sounding politically incorrect, I want to say that I have a great appreciation for the culture, history, lore, and general aesthetic of Asian cultures. This holds especially true for Japan, and has been since well before concepts like “cultural appropriation” had entered the public consciousness, and well before the current anime obsession was a thing. As a result, I find myself drawn to games with an Asian theme to them; so it was with Senshi.

In Arcane Wonders’ Senshi you are a warrior-monk studying and training to develop your Strength, Agility, Wisdom, and Honor. Your Master is dying and only one of his students can become the new Master, they must be strong in all of these attributes, and weak in none of them. (That last bit is actually important). The theme and backstory are great, the box art is perfect for the theme and draws you right in.

But here’s the thing. Once you put the rulebook down, the theme didn’t matter. The engraved kanji on the attribute tiles were little more than texture, and we just referred them by colour anyway. The artwork on the individual player’s Training Cards is just as nice as on the box, but not even noticeable once you start thinking about the game. You could make this exact game with any theme, or even no theme at all.

That being said, the game is great. There are four colours of tiles, matching the four previously mentioned attributes, at the start of the game they are randomly stacked in sets of three tiles. Each player takes a single stack into their hand, and then play starts.

On their turn, a player can take one of three actions. They can Study, taking one of the stacks in play, and placing it on their Training Card (with a maximum of three stacks on their card). They can Train, taking the top tile from any stack, including those on the table, on their own Training Card, or even on their opponent’s Card. Lastly, they can Test by placing one of the tiles in their hand into the appropriate attribute’s scoring pile. If they choose Test, every player also gets to move the top tile from any of the stacks on their Card into their scoring pile if it matches the played attribute.

When all the stacks have been taken from the able, the game ends and scoring begins. This was a bit tricky to understand, but the examples in the rulebook cleared it up. If a single player has a scoring pile for any attribute that is lower than all the other player’s piles in that attribute they are immediately eliminated, even if they would have had the higher scoring pile in another attribute. If two or more players tie for the lowest pile, no players are eliminated. Of the remaining players, the one who has the highest single scoring pile in any attribute wins.

It took about a game and a half for the strategy to really start clicking for most of us. But we still had fun in the first game, and it only takes about 15 minutes to play, so that’s still a pretty easy learning curve to handle.

Everyone I played with really loved this game. It’s easy to learn, challenging once you learn it, and an experienced player is likely to only have an advantage in their first game before the other players start to “get” the strategies. I know I started this review on a bit of a down note, but this a truly great game that I look forward to pulling out again.